The recent events in Japan have made me think about the following.

Nuclear Plants are usually designed to limit risk of serious accidents to a 'design basis probability' for example, say, 10E-6/year. This is the criteria for a single plant. However, when there is a population of hundreds of reactors, how do we combine the individual probabilities of a serious accident ? I know I could probably research this myself but having found this site I a sure there is someone that will be able to answer this question quite easily. Thanks

To answer the pure probabilistic question that J Presley presented, using bayer's notation (p=probability of an item failing), the the probability of at least one element failing is 1-P(none fail)= 1-(1-p)^n. This type of calculation is common in system reliability where a bunch of components are linked in parallel, so that the system continues to function if at least one component is functioning.

Before you set up your analysis, keep in mind the reality of what the current situation involves.

This meltdown was not directly caused by the earthquake or the tsunami. It was because of a lack of back-up power. If they had enough back-up power, regardless of the earthquake/tsunami, they could have kept the cooling water running, and none of the meltdowns would have happened. The plant would probably be back up and running by now.

Japan, for whatever reason, has two electrical frequencies (50 Hz and 60 Hz). And, you can't run a 50 Hz motor at 60 Hz or vice versa. So, whatever frequency the plant was using/providing is the frequency they need to power up. "U.S. type" equipment runs at 60 Hz and "European type" equipment runs at 50 Hz, so in providing an alternative power source, keep that in mind.

Next, that plant is in a fairly remote mountainous area. To supply external power requires a LONG power line from another area (requiring days/weeks to build) or large gasoline/diesel driven generators. Those generators are heavy enough that flying them in with a helicopter is not an option. Trucking them in may also be a problem due to the roads being blocked from the earthquake/tsunami. Bringing them in by ship is an option, but it also takes days/weeks.

The bottom line is, the risk analysis for this plant comes down to a lack of SEVERAL (not just one or two) layers of back-ups. And, because this reactor is an "active design", which means it requires power to stay safe, those layers are not a luxury, they're required.

This is an old plant. A new plant would not be designed this way.

J Presley: To answer your question requires a short explanation of terms.

As I said in my comment, to me, this is a matter of "when", not "if", and as a crude model, I suggested the Poisson Distribution/Process. The Poisson Process is a series of events that happen at an average rate over time (or space, or some other measure). These events are independent of each other and random (no patterns). The events happen one at a time (2 or more events don't happen at the exact same time). It is basically a binomial situation ("event" or "no event") where the probability that the event will happen is relatively small. Here are some links:

Next, the data. Here's a list of nuclear accidents since 1952 with the INES Level:

I count 19 accidents, 9 state an INES Level. For those without an INES level, all I can do is assume the level is below Level 1, so I'll assign them Level 0. 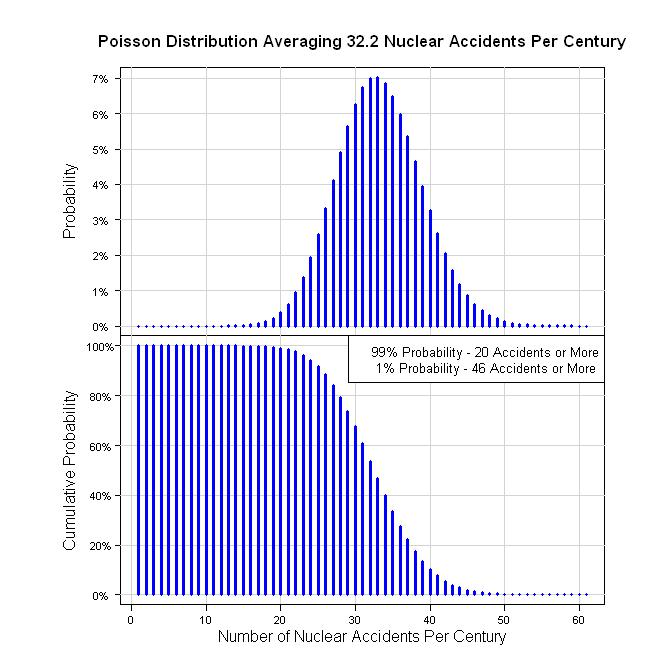 Originally, I suggested a Lognormal, Gamma, or Exponential Distribution for the severity of the accidents. However, since the INES Levels are given as discrete values, the distribution would need to be discrete. I would suggest either the Geometric or Negative Binomial Distribution. Here are their descriptions: 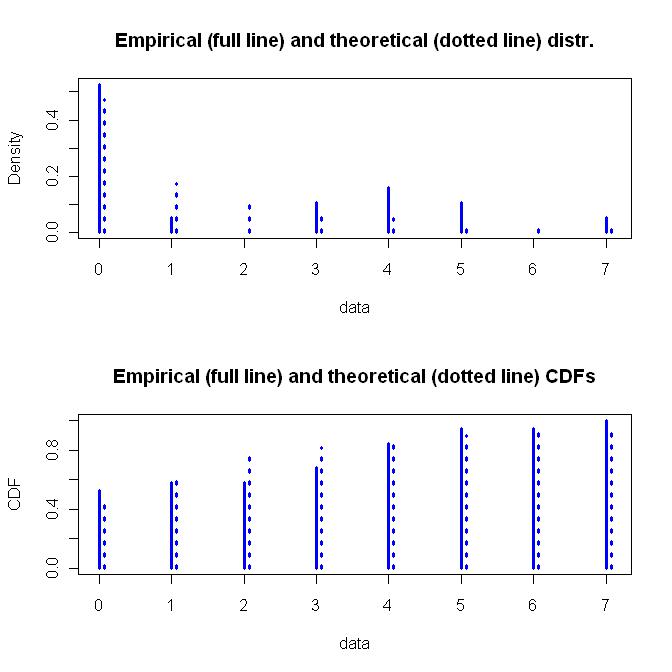 Below is the code for all this stuff. If anyone finds a problem with my assumptions or coding, don't be afraid to point it out. I checked through the results, but I didn't have enough time to really chew on this.

J Presley: I'm sorry I couldn't finish this up yesterday. You know how it is on weekends, lots of duties.

The last step in this process is to assemble a simulation using the Poisson Distribution to determine when an event happens, and then the Negative Binomial Distribution to determine the severity of the event. You might run 1000 sets of "century chunks" to generate the 8 probability distributions for Level 0 through Level 7 events. If I get the time, I might run the simulation, but for now, the description will have to do. Maybe someone reading this stuff will run it. After that is done, you'll have a "base case" where all of the events are assumed to be INDEPENDENT.

Obviously, the next step is to relax one or more of the above assumptions. An easy place to start is with the Poisson Distribution. It assumes that all events are 100% independent. You can change that in all sorts of ways. Here are some links to Non-homogeneous Poisson Distributions:

The same idea goes for the Negative Binomial Distribution. This combination will lead you down all sorts of paths. Here are some examples:

The bottom line is, you asked a question where the answer depends on how far you want to take it. My guess is, someone, somewhere will be commissioned to generate "an answer" and will be surprised at how long it takes to do the work.

I had a chance to slap together the above mentioned simulation. The results are shown below. From the original Poisson Distribution, the simulation provides eight Poisson Distributions, one for each INES Level. As the severity level rises (INES Level Number rises), the number of expected events per century drops. This may be a crude model, but it's a reasonable place to start. 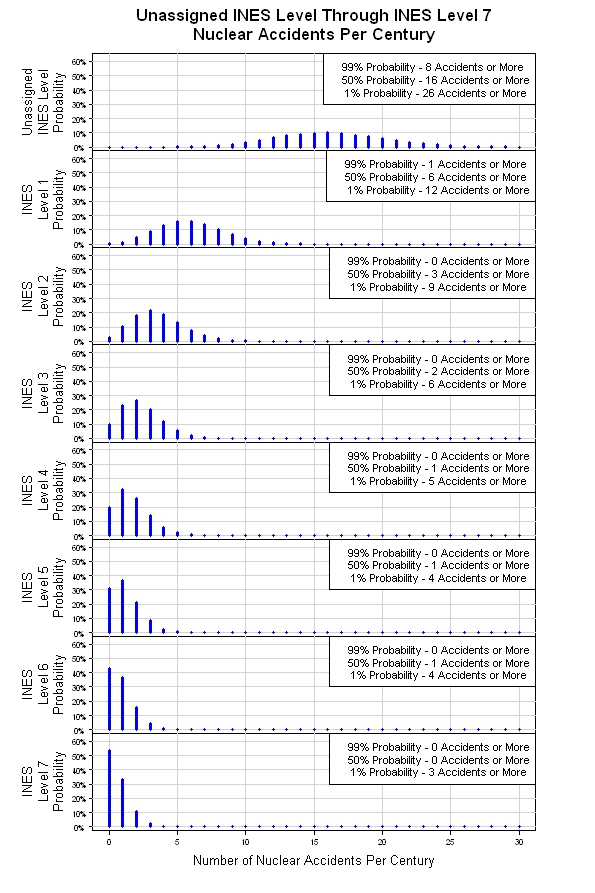 The underlying difficulty behind the question is that situations that have been anticipated, have generally been planned for, with mitigation measures in place. Which means that the situation should not even turn into a serious accident.

The serious accidents stem from unanticipated situations. Which means that you cannot assess probabilities for them - they are your Rumsfeldian unknown unknowns.

The assumption of independence is clearly invalid - Fukushima Daiichi shows that. Nuclear plants can have common-mode failures. (i.e. more than one reactor becoming unavailable at once, due to a common cause).

Although probabilities cannot be quantitatively calculated, we can make some qualitative assertions about common-mode failures.

For example: if the plants are all built to the same design, then they are more likely to have common-mode failures (for example the known problem with pressurizer cracks in EPRs / PWRs)

If the plant sites share geographic commonalities, they are more likely to have common-mode failures: for example, if they all lie on the same earthquake fault line; or if they all rely on similar rivers within a single climatic zone for cooling (when a very dry summer can cause all such plants to be taken offline).

As commentators pointed out, this has the very strong independency assumption.

19
What is the community's take on the Fourth Quadrant?