What could it mean to “Rotate” a distribution? [duplicate]

This question got me thinking about the meaning of variance: Intuition behind standard deviation.

Variance of a set of data is calculated the same way that the moment of inertia is calculated for a physical body. The moment of inertia is related to the energy required to rotate the body at a given speed. A figure skater will rotate faster with arms pulled in than stretched out. So what would be the analogous result of reducing variance, if any. Perhaps the analogy simply breaks down. Are there any publications that have investigated this analogy?

The direct analogy is pretty clear: 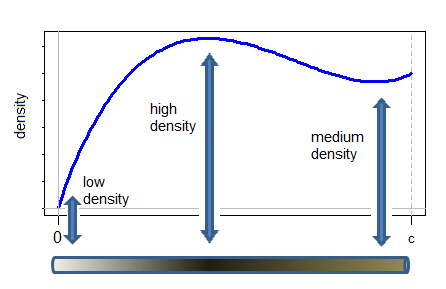 Then then second moment of inertia of the rod is the variance of $X$.

And hence what it 'means' to rotate a distribution is clear enough - it's quite literally rotating the 'rod' whose density represents probability-density. Variance is how 'hard' it would be to rotate the rod (low variance means 'easy to spin', high variance means it takes more push to spin it ... and stop it, if you spin it).

You don't actually 'spin' a probability density and imagine that to be physically difficult, any more than electricity is wet because of the water analogy. To expect that level of correspondence is to miss the point of such analogies (the aspects that correspond, correspond, but not every consequence of the correspondence in one realm carries over with it).

The point of saying the 'rod is hard to spin' is to give a pretty direct sense of what high variance is telling you about density. But to insist that the probability density itself spin is to miss the point.

If you have greater variance, then you need to expend a greater effort (meaning, spend more money collecting the data) to obtain a given level of precision. The precision for $\bar X$ is of course is the inverse standard deviation, $\sqrt{n}/\sigma$.

In signals, variance is essentially a measure of energy. Of course in this case they are related directly, not inversely.

Not the answer you're looking for? Browse other questions tagged variance or ask your own question.