Does this graphical model describe a hidden Markov model?

I'm facing the problem of visual tracking in computer vision. I have some observation (image blobs by background subtraction) produced by some moving object, and the task is to infer the state (position, velocity) of the object given the observation. I assume that each state depends only on the immediate predecessor (Markov assumption), ruled by a temporal model (the dynamics) that describes how a state $X_t$ evolve in $X_{t+1}$, and that the measurement model do not depends on time, so that $y_t$ do not depends on $X_{t-1}$ but only on $X_t$.

Everywhere in the web I have found that this problem can be described by this graphical model: 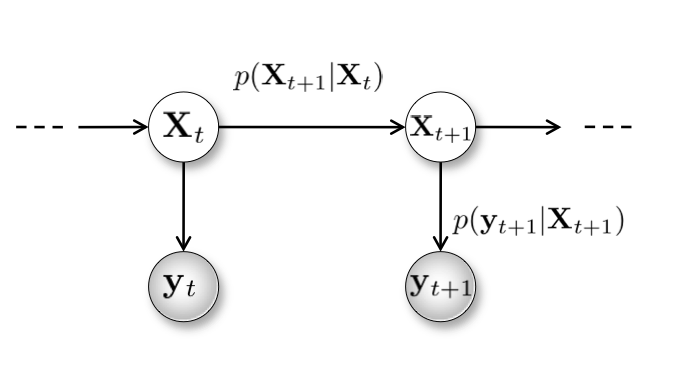 For inferring the posterior distribution, after receiving new measurements, a Kalman filter or Particle filter is used.

But anywhere I explicitly read that this is an Hidden Markov Model.

In short: you don't know yet. The plate diagram for a State Space Model and a Hidden Markov Model are the same (and they are what you have presented). This is deliberate.

The distinction between the two models is in the nature of X. If X is multinomial with K states then this is an K-state HMM of order 1. If X is (possibly multivariate and) continuous, then it is a SSM. If X also happens to be Normal then it is a linear Normal SSM, perhaps the most common variety, for which the Kalman filter and RT smoother was designed.

For typological purposes it doesn't apparently matter what Y is or the form of the conditional distributions, although clearly these strongly affect how easy it is to filter, smooth and estimate parameters for.

Not the answer you're looking for? Browse other questions tagged graphical-model hidden-markov-model or ask your own question.