What is a density function?

I know about histograms and also know that if we connect the mid-points on the top of bars in a histogram we will get a frequency polygon. This polygon could then be 'smoothed' in a way that it generates a frequency curve like in normal distribution, Poisson distribution, etc. What is smoothing? How is it done? I have heard about the 'filtering techniques' and 'removing noise' but I don't understand the terms. Googling yields things like Kalman filter, moving average filter, low-pass filter, kriging, convolution, etc but they are very abstract concepts for me. Is there any good resource to start learning about these things from scratch?

To start with the title question, the density function is (for a continuous random variable) a function that describes the relative probability of the values taken by the variable (it is not probability! the word relative is important, since the probabilities are all zero); loosely it's proportional to the probability of being within a very small interval containing the point.

Areas under the density, between values on the x-axis, do give probabilities of lying in those intervals.

Here's an example of a density function: 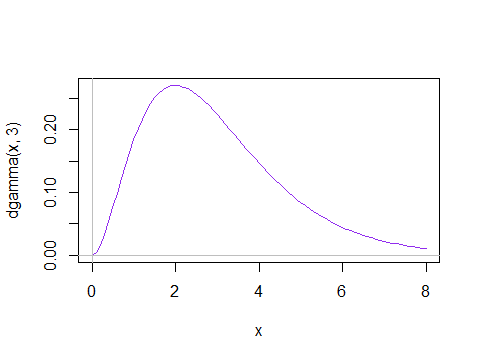 You could work out the probability of getting a value between 2.5 and 3.5 by finding the area of the curve between those values (that area turns out to be 0.223 for that density).

See this description relating to an analogy which might give a clearer sense of why it's called 'density'.

You seem to be envisioning specific, named probability distributions as things obtained by manipulating something derived from data (smoothing a histogram).

Generally speaking a probability distribution such as the normal is a model, a hypothetical construct that is an approximation for the behaviour of some variable or variables.

Such simple models are not typically obtained by 'smoothing' a histogram or a polygon, but suitability (or more accurately, unsuitability) might be approximately assessed by considering such displays. Beware, however; using things like histograms - and by extension, frequency polygons - to assess distributions. Using them for this purpose must be approached with caution, as they can be misleading if taken too readily at face value. QQ plots and quantile plots or empirical cumulative distribution functions would often be a better way to spot the suitability of such models, though interpreting QQ plots in particular require a little more effort to learn.

See here for a non-mathematical description of what a kernel density estimate is. 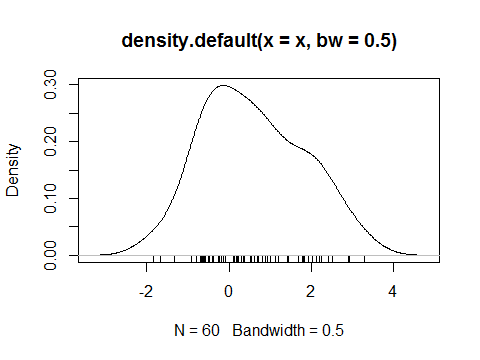 As with a hypothetical density, these empirical density estimates give some assessment of the relative probability (assuming the density is smooth and doesn't vary too quickly)

Your later questions at the end there conflate a whole set of topics which are mostly unrelated to the initial question. You might do better with some books to start, rather than googling, which will lead you through a topic rather than exposing you to large numbers of not-closely related terms.

Not the answer you're looking for? Browse other questions tagged density-function smoothing filter or ask your own question.

11
Difference between density and probability
2
What does the height represent in a probability density function?
222
How to interpret a QQ plot
117
Assessing approximate distribution of data based on a histogram
34
What distribution does my data follow?
7
How to smear a histogram
5
What could it mean to "Rotate" a distribution?
1
Automatically detect "bimodal" curves in a large number of short time series