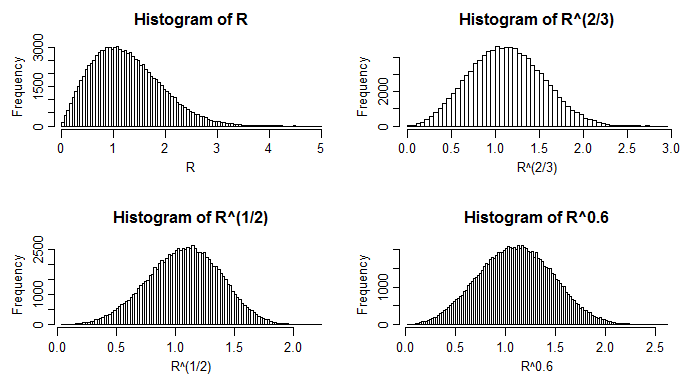 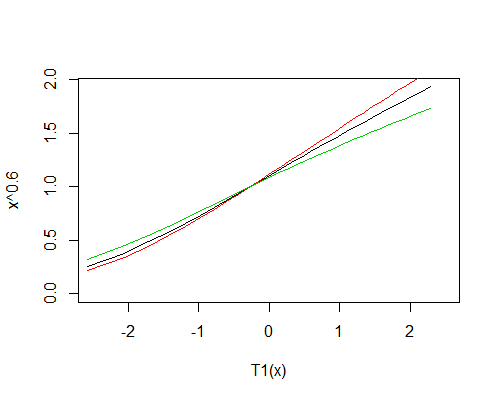 The black is the 0.6 power, the red is the 2/3 power and the green is the 1/2 power. The one that most closely reproduces the exact transformation should lie closest to a straight line ... and that looks to be the green line.

(Added in edit: I've checked more carefully; of those three, the green line is nearest to straight overall, but the black line is straighter in the right tail. All three give distributions that are pretty nearly normal - but I should have asked why you needed normality.)

An additional discussion on powers of exponential - and hence of Rayleigh - variables:

Powers of exponential random variables are distributed as Weibull. Specifically, if $X$ is exponential, $X^\frac{1}{k}$ is Weibull with shape parameter $k$.

So cube roots and fourth roots of exponentials (Rayleigh variables to the powers $\frac{2}{3}$ and $\frac12$ respectively) will be Weibull with shape parameters $3$ and $4$.

While no Weibull is symmetric, particular choices for $k$ will produce Weibull distributions with zero skewness (different choices for different measures of skewness).

Here are the values of $k$ that have $0$ skewness for several skewness measures and the corresponding power ($p$) of the Rayleigh:

So it's little surprise that a value of $p$ near $0.6$ would appear suitable.

In respect of the issue with outliers:

So if you have values from some distribution that's not Rayleigh (with values that a discrepant for a Rayleigh model) and you transform to normality as if it were Rayleigh, then you definitely end up with a non-normal result ... one which will likely have discrepant-looking values relatively to a normal model.

In the absence of a specification of what makes an outlier, here's an example: 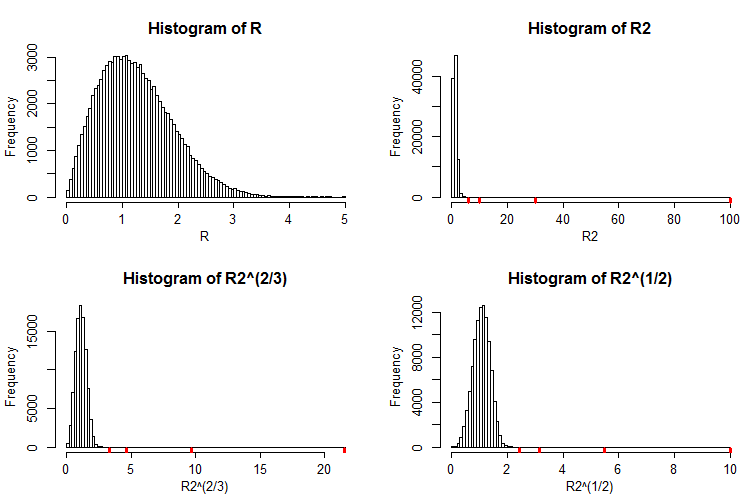 This is the same data as above (a large sample from a Rayleigh distribution with $\sigma=1$). In the second panel I have added four outliers (at 6, 10, 30 and 100), marked in red. In the third panel, we see the effect of the power $p=\frac{2}{3}$ and in the last panel the effect of the power $p=\frac{1}{2}$. Note that for the Rayleigh data, $\mu+3\sigma$ is at about 3.22. The value at 6 is already far enough away as to be considered highly unlikely even in a quite large sample with that level of skewness -- an outlier in some sense. You can see that the transformation brings it back toward the main part of the data, so that by the last panel it's visually a somewhat mild outlier, fairly borderline given the sample size (about 4.5 sd's above the mean).

The value 10 (on the original scale), while clearly an outlier, is noticeably less discrepant but still clearly inconsistent with the idea that the data are normal, and the larger values even more so.

So they do in some sense "come in" -- but as to whether the status of them being 'outliers' has changed depends very much on how you define 'outlier'.

The suggestion of a fourth root for a gamma* with small values of the shape parameter is in Hawkins and Wixley (ref below). While the Wilson-Hilferty works best over a wide range of gamma distributions, the Hawkins-Wixley does seem to do a little better in some parts of the low-end (smaller values of the shape parameters). That fourth root of a gamma corresponds to a square root of a Rayleigh.

*(NB chi-square is a gamma with a particular scale, and when looking at power transformation, the scale won't matter. So even though both references seem to be about chi-square distributions, their conclusions apply to gamma distributions more generally)

Not the answer you're looking for? Browse other questions tagged normal-distribution data-transformation pdf gaussian-process rayleigh or ask your own question.