What is the effect of having correlated predictors in a multiple regression model?

I learned in my linear models class that if two predictors are correlated and both are included in a model, one will be insignificant. For example, assume the size of a house and the number of bedrooms are correlated. When predicting the cost of a house using these two predictors, one of them can be dropped because they are both providing a lot of the same information. Intuitively, this makes sense, but I have a some more technical questions:

The topic you are asking about is multicollinearity. You might want to read some of the threads on CV categorized under the multicollinearity tag. @whuber's answer linked above in particular is also worth your time.

The assertion that "if two predictors are correlated and both are included in a model, one will be insignificant", is not correct. If there is a real effect of a variable, the probability that variable will be significant is a function of several things, such as the magnitude of the effect, the magnitude of the error variance, the variance of the variable itself, the amount of data you have, and the number of other variables in the model. Whether the variables are correlated is also relevant, but it doesn't override these facts. Consider the following simple demonstration in R:

The correlation between the two variables is lowest in the first example and highest in the third, yet neither variable is significant in the first example and both are in the last example. The magnitude of the effects is identical in all three cases, and the variances of the variables and the errors should be similar (they are stochastic, but drawn from populations with the same variance). The pattern we see here is due primarily to my manipulating the $N$s for each case.

Thinking about what would happen if you included both correlated variables vs. only one is similar, but slightly more complicated than the approach discussed above. This is because not including a variable means the model uses less degrees of freedom, which changes the residual variance and everything computed from that (including the variance of the regression coefficients). In addition, if the non-included variable really is associated with the response, the variance in the response due to that variable will be included into the residual variance, making it larger than it otherwise would be. Thus, several things change simultaneously (the variable is correlated or not with another variable, and the residual variance), and the precise effect of dropping / including the other variable will depend on how those trade off. The best way to think through this issue is based on the counterfactual of how the model would differ if the variables were uncorrelated instead of correlated, rather than including or excluding one of the variables.

Armed with an understanding of the VIF, here are the answers to your questions:

This is more of comment, but I wanted to include a graph and some code.

I think the statement "if two predictors are correlated and both are included in a model, one will be insignificant" is false if you mean "only one." Binary statistical significance cannot be used for variable selection. 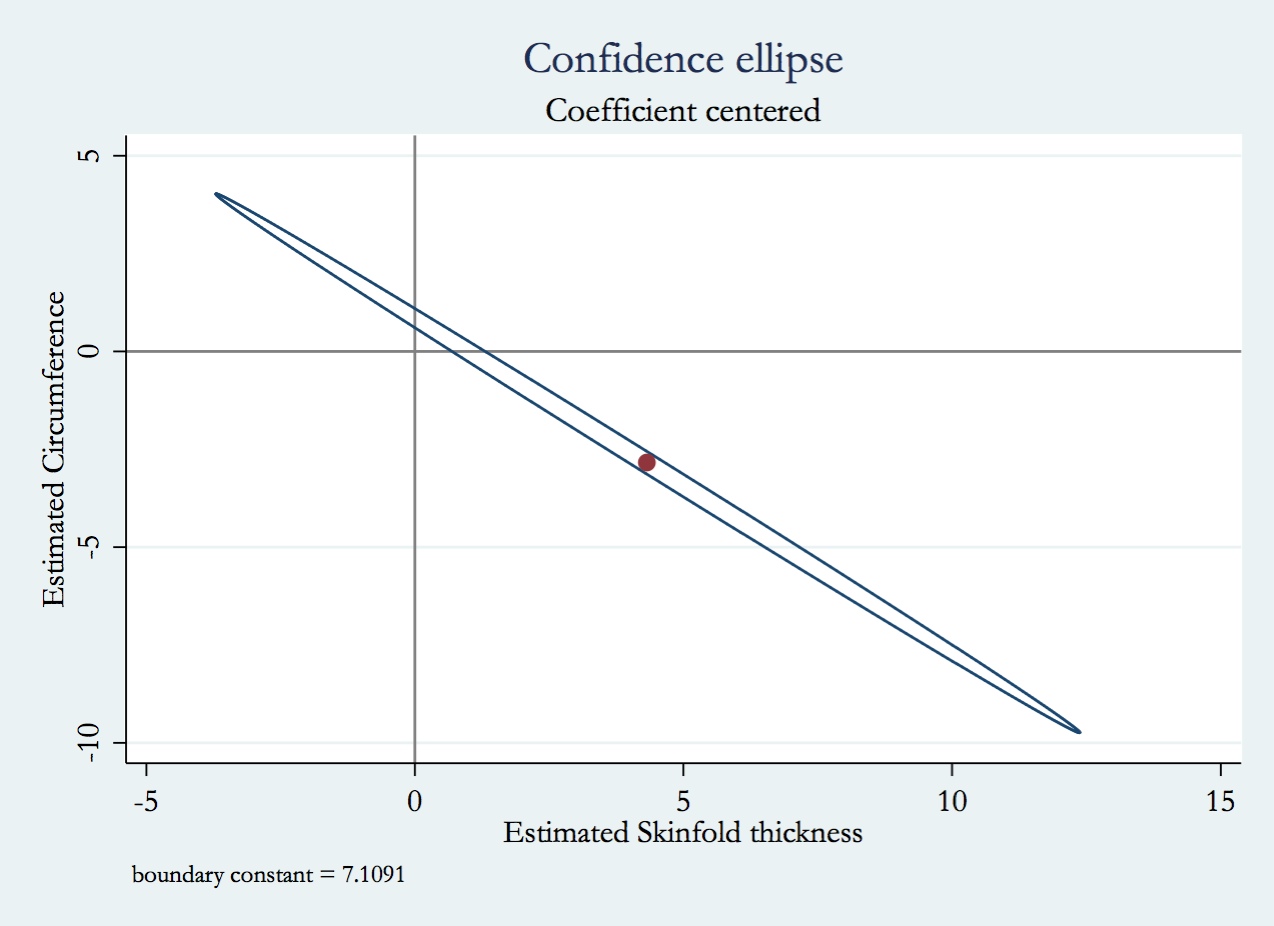 As you can see from the regression table, everything is insignificant, though the p-values do vary a bit.

The last Stata command graphs the confidence region for 2 of the regression coefficients (a two dimensional analog of the familiar confidence intervals) along with the point estimates (red dot). The confidence ellipse for the skin fold thickness and thigh circumference coefficients is long, narrow and tilted, reflecting the collinearity in the regressors. There's high negative covariance between the estimated coefficients. The ellipse covers parts of the vertical and the horizontal axes, which means that we cannot reject the individual hypotheses that the $\beta$s are zero, though we can reject the joint null that both are since the ellipse does not cover the origin. In other words, either thigh and triceps are relevant for body fat, but you can't determine which one is the culprit.

So how do we know which predictors would be less significant? The variation in a regressor can be classified into two types:

In estimating the coefficients of each regressor, only the first will be used. Common variation is ignored since it cannot be allocated, though it is used in prediction and calculating $R^2$. When there is little unique information, the confidence will be low and coefficient variances will be high. The higher the multicollinearity, the smaller the unique variation, and the greater the variances.

*The skin fold is the width of a fold of skin taken over the triceps muscle, and measured using a caliper.

As @whuber noted, this is a complex question. However, the first sentence of your post is a vast simplification. It is often the case that two (or more) variables will be correlated and both related to the dependent variable. Whether they are significant or not depends on both effect size and cell size.

In your example, suppose that, for a given size of house, people preferred fewer rooms (at least in NYC, this isn't unreasonable - it would indicate older buildings, more solid walls etc, and might be a marker for neighborhood). Then both could be significant, in opposite directions!

Or, suppose the two variables were house size and neighborhood - these would be correlated, surely, larger houses in better neighborhoods - but they could still both be significant and would surely both be related to house price.

Also, using only "correlated" masks complexities. Variables can be strongly related without being correlated.

Not the answer you're looking for? Browse other questions tagged regression multiple-regression p-value linear-model multicollinearity or ask your own question.