Marginal model versus random-effects model – how to choose between them? An advice for a layman

In searching for any info about marginal model and random-effects model, and how to choose between them, I have found some info but it was more-or-less mathematical abstract explanation (like for example here: https://stats.stackexchange.com/a/68753/38080). Somewhere I have found that there were observed substantial differences between a parameter estimates between these two methods/models (http://www.biomedcentral.com/1471-2288/2/15/), however the opposite was wrote by Zuur et al. (2009, p. 116; http://link.springer.com/book/10.1007%2F978-0-387-87458-6). Marginal model (generalized estimating equation approach) brings population-averaged parameters, while outputs from random-effects model (generalized linear mixed model) take into account random effect – subject (Verbeke et al. 2010, pp. 49–52; http://link.springer.com/chapter/10.1007/0-387-28980-1_16).

I would like to see some layman-like explanation of these models illustrated on some model (real-life) examples in language familiar to non-statistician and non-mathematician.

How should be outputs from these models interpreted?

Thank you for linking my answer! I will try to give an explicit explanation. This question has been discussed many times at this site (see the related questions on the right side), but it is really confusing and important for a "layman".

First of all, for linear models (continuous response), the estimates of marginal and conditional (random-effects) models coincide. So I will focus on nonlinear models, especially logistic regression for binary data.

The mostly used example to distinguish marginal and conditional models is:

If you are a doctor and you want an estimate of how much a statin drug will lower your patient’s odds of getting a heart attack, the subject-specific coefficient is the clear choice. On the other hand, if you are a state health official and you want to know how the number of people who die of heart attacks would change if everyone in the at-risk population took the stain drug, you would probably want to use the population–averaged coefficients. (Allison, 2009)

The two kinds of scientific questions correspond to these two models.

The best illustration I have seen so far is the following figure in Applied Longitudinal Analysis (Fitzmaurice, Laird and Ware, 2011, Page 479), if we change the covariate from "statin drug" to "time". It is clear that the two models differ in the scale of coefficients, which can be essentially explained by the fact that the mean of a nonlinear function of a random variable does not equal the nonlinear function of the mean. 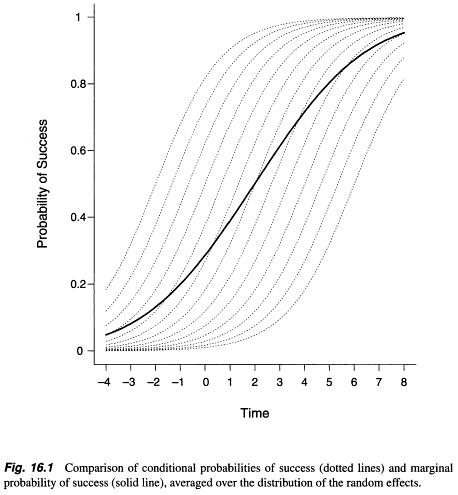 There is another example on this site.

Not the answer you're looking for? Browse other questions tagged mixed-model random-effects-model glmm generalized-estimating-equations marginal-model or ask your own question.