I have a semi-small matrix of binary features of dimension 250k x 100. Each row is a user and the columns are binary "tags" of some user behavior e.g. "likes_cats".

I would like to fit the users into 5-10 clusters and analyze the loadings to see if I can interpret groups of user behavior. There appears to be quite a few approaches to fitting clusters on binary data - what do we think might be the best strategy for this data?

So far I've had some success with using hierarchical clustering but I'm really not sure it's the best way to go.. 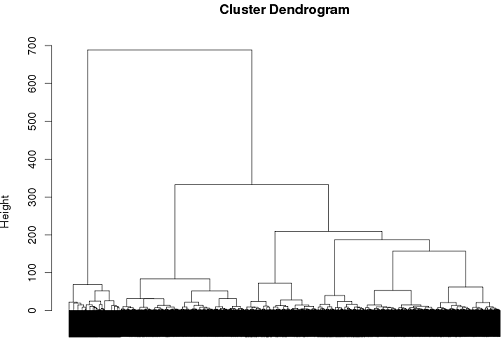 Take the following probability distribution where A, B, and C can take on values of 1 or 0.

If these were independent of each other, then we would expect to see:

Once this possiblity is eliminated, we might hypothesize that any observed dependency is due to values clustering within otherwise unobserved subgroups. To test this idea, we can estimate the following model:

Where $X$ is a latent categorical variable with $n$ levels. You specfy $n$, and the model parameters (marginal probabilities of class membership, and class specific probabilities for each variable) can be estimated via expectation-maximization.

In practice, you could estimate several models, with $5 \le n \le 10$, and "choose" the best model based on theory, likelihood based fit indices, and classification quality (which can be assessed by calculating posterior probabilities of class membership for the observations).

However, trying to identify meaningful patterns in 100 variables with 5-10 groups will likely require reducing that list down prior to estimating the model, which is a tricky enough topic in its own right (REF).

Actually, frequent itemset mining may be a better choice than clustering on such data.

The usual vector-oriented set of algorithms does not make a lot of sense. K-means for example will produce means that are no longer binary.

Not the answer you're looking for? Browse other questions tagged r clustering binary-data or ask your own question.

2
Which analysis for a set of (0/1)binary variables alone?
3
What is a good technique for grouping objects based on binary or dichotomous traits?
0
Any distance measures that are more useful for binary data clustering?
0
I have 20 symptoms and need to do a hierarchical cluster analysis? Which method is appropriate?
0
How to determine correlation between sets of integers