Which has the heavier tail, lognormal or gamma?

(This is based on a question that just came to me via email; I've added some context from a previous brief conversation with the same person.)

Last year I was told that the gamma distribution is heavier tailed than the lognormal, and I've since been told that's not the case.

The (right) tail of a distribution describes its behavior at large values. The correct object to study is not its density--which in many practical cases does not exist--but rather its distribution function $F$. More specifically, because $F$ must rise asymptotically to $1$ for large arguments $x$ (by the Law of Total Probability), we are interested in how rapidly it approaches that asymptote: we need to investigate the behavior of its survival function $1- F(x)$ as $x \to \infty$. 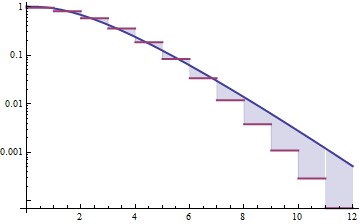 It is true that when the densities $f$ and $g$ exist and $f(x) \gt g(x)$ for $x \gt x_0$ then $F$ is heavier-tailed than $G$. However, the converse is false--and this is a compelling reason to base the definition of tail heaviness on survival functions rather than densities, even if often the analysis of tails may be more easily carried out using the densities.

Counter-examples can be constructed by taking a discrete distribution $H$ of positive unbounded support that nevertheless is no heavier-tailed than $G$ (discretizing $G$ will do the trick). Turn this into a continuous distribution by replacing the probability mass of $H$ at each of its support points $k$, written $h(k)$, by (say) a scaled Beta$(2,2)$ distribution with support on a suitable interval $[k-\varepsilon(k), k+\varepsilon(k)]$ and weighted by $h(k)$. Given a small positive number $\delta,$ choose $\varepsilon(k)$ sufficiently small to ensure that the peak density of this scaled Beta distribution exceeds $f(k)/\delta$. By construction, the mixture $\delta H + (1-\delta )G$ is a continuous distribution $G^\prime$ whose tail looks like that of $G$ (it is uniformly a tiny bit lower by an amount $\delta$) but has spikes in its density at the support of $H$ and all those spikes have points where they exceed the density of $f$. Thus $G^\prime$ is lighter-tailed than $F$ but no matter how far out in the tail we go there will be points where its density exceeds that of $F$. 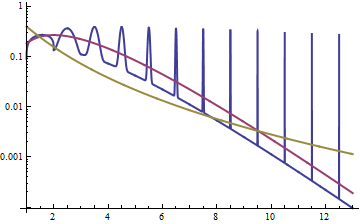 Incidentally, we can perform this analysis directly on the survival functions of lognormal and Gamma distributions, expanding them around $x=\infty$ to find their asymptotic behavior, and conclude that all lognormals have heavier tails than all Gammas. But, because these distributions have "nice" densities, the analysis is more easily carried out by showing that for sufficiently large $x$, a lognormal density exceeds a Gamma density. Let us not, however, confuse this analytical convenience with the meaning of a heavy tail.

Similarly, although higher moments and their variants (such as skewness and kurtosis) say a little about the tails, they do not provide sufficient information. As a simple example, we may truncate any lognormal distribution at such a large value that any given number of its moments will scarcely change--but in so doing we will have removed its tail entirely, making it lighter-tailed than any distribution with unbounded support (such as a Gamma).

A fair objection to these mathematical contortions would be to point out that behavior so far out in the tail has no practical application, because nobody would ever believe that any distributional model will be valid at such extreme (perhaps physically unattainable) values. That shows, however, that in applications we ought to take some care to identify which portion of the tail is of concern and analyze it accordingly. (Flood recurrence times, for instance, can be understood in this sense: 10-year floods, 100-year floods, and 1000-year floods characterize particular sections of the tail of the flood distribution.) The same principles apply, though: the fundamental object of analysis here is the distribution function and not its density.

The gamma and the lognormal are both right skew, constant-coefficient-of-variation distributions on $(0,\infty)$, and they're often the basis of "competing" models for particular kinds of phenomena.

There are various ways to define the heaviness of a tail, but in this case I think all the usual ones show that the lognormal is heavier. (What the first person might have been talking about is what goes on not in the far tail, but a little to the right of the mode (say, around the 75th percentile on the first plot below, which for the lognormal is just below 5 and the gamma just above 5.)

However, let's just explore the question in a very simple way to begin.

Below are gamma and lognormal densities with mean 4 and variance 4 (top plot - gamma is dark green, lognormal is blue), and then the log of the density (bottom), so you can compare the trends in the tails: 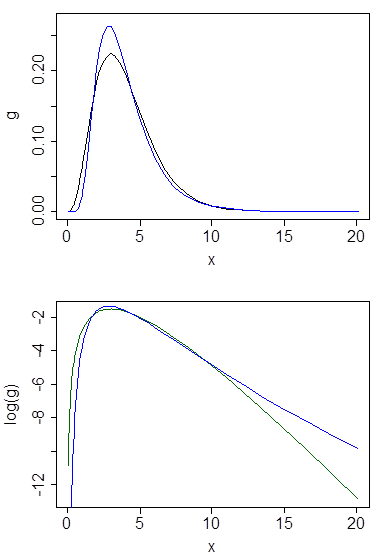 It's hard to see much detail in the top plot, because all the action is to the right of 10. But it's quite clear in the second plot, where the gamma is heading down much more rapidly than the lognormal.

We can do it algebraically, where we can look at the ratio of densities as $x\rightarrow\infty$ (or the log of the ratio). Let $g$ be a gamma density and $f$ lognormal:

The term in the [ ] is a quadratic in $\log(x)$, while the remaining term is decreasing linearly in $x$. No matter what, that $-x/\beta$ will eventually go down faster than the quadratic increases irrespective of what the parameter values are. In the limit as $x\rightarrow\infty$, the log of the ratio of densities is decreasing toward $-\infty$, which means the gamma pdf is eventually much smaller than the lognormal pdf, and it keeps decreasing, relatively. If you take the ratio the other way (with lognormal on top), it eventually must increase beyond any bound.

That is, any given lognormal is eventually heavier tailed than any gamma.

Other definitions of heaviness:

Some people are interested in skewness or kurtosis to measure the heaviness of the right tail. At a given coefficient of variation, the lognormal is both more skew and has higher kurtosis than the gamma.**

For example, with skewness, the gamma has a skewness of 2CV while the lognormal is 3CV + CV$^3$.

There are some technical definitions of various measures of how heavy the tails are here. You might like to try some of those with these two distributions. The lognormal is an interesting special case in the first definition - all its moments exist, but its MGF doesn't converge above 0, while the MGF for the Gamma does converge in a neighborhood around zero.

** As Nick Cox mentions below, the usual transformation to approximate normality for the gamma, the Wilson-Hilferty transformation, is weaker than the log - it's a cube root transformation. At small values of the shape parameter, the fourth root has been mentioned instead see the discussion in this answer, but in either case it's a weaker transformation to achieve near-normality.

The comparison of skewness (or kurtosis) doesn't suggest any necessary relationship in the extreme tail - it instead tells us something about average behavior; but it may for that reason work better if the original point was not being made about the extreme tail.

Resources: It's easy to use programs like R or Minitab or Matlab or Excel or whatever you like to draw densities and log-densities and logs of ratios of densities ... and so on, to see how things go in particular cases. That's what I'd suggest to start with. 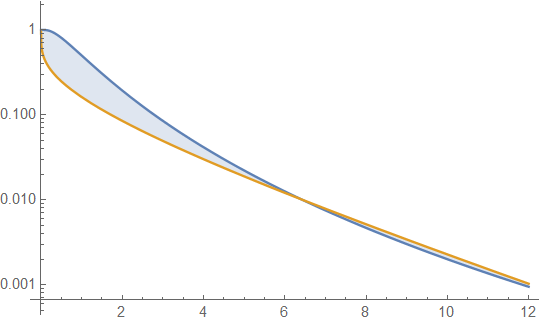 the survival function for the lognormal distribution (LND) in blue and the gamma distribution (GD) in orange. This brings us to our first caution. That is, if this plot were all we were to examine, we might conclude that the tail for GD is heavier than for LND. That this is not the case is shown by extending the x-axis values of the plot, thus 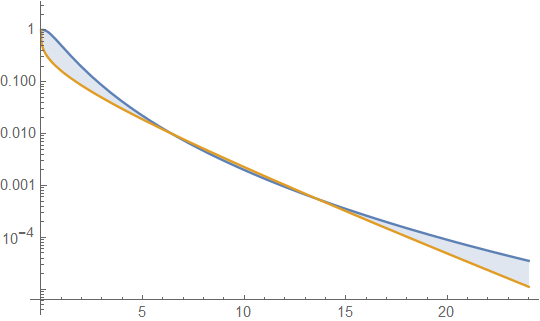 Edit 2020-02-18: BTW, there is a lot of literature on classifying tail heaviness of functions that, in effect, assumes (incorrectly) that one can compare hazard functions while ignoring the requirement for having an indeterminate form to do so. There does not seem to be much literature in support of the methods of survival function comparison outlined herein, at least that I could find. However, there is a recent publication appendix that may be cite-worthy. Any other references for the methods outlined herein would be greatly appreciated.

Not the answer you're looking for? Browse other questions tagged distributions gamma-distribution lognormal-distribution heavy-tailed or ask your own question.