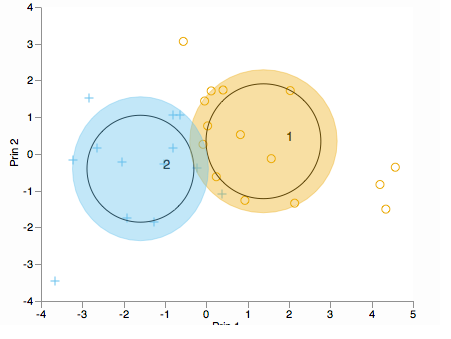 I got this plot when I plotted a clustering object in R. If I run km <- clara(data, 2), then plot(km), I get a similar plot. How do we interpret this plot with respect to the clustering? How useful would a similar plot be if I have more than five clusters? To be more precise, how are principal components related to clusters?

So say PCA gave us two components: Prin1=0.5*Height+0.5*Weight and Prin2=Income. You can map every point in your dataset to a 2D plot with these two dimension, and it might look something like what you have above.

PCA tries to find combinations of features that lead to maximum separation between data points. What this means is that, if you had another dimension, say age, in your dataset, which was the same for all members, then that would not be considered, alone or in combination, among the top principal components. Only the features that vary a lot from data point to data point form a part of the top principal components. As a result, the points should appear to be quite far apart from each other on the plot.

The plot of PCA vs. clusters may not make sense under a couple of conditions:

a) There is a lot of variance in the dataset along each dimension, so looking at the top 2-3 dimensions does not really give you much information.

This is a very high-level view of PCA. Take a look at this tutorial for an excellent accessible introduction.

Not the answer you're looking for? Browse other questions tagged r clustering data-visualization pca clara or ask your own question.

4
Classification on principal components
10
Difference between PCA and spectral clustering for a small sample set of Boolean features
3
Under what conditions would clustering on top of Principal Components would return different result (and worse) than clustering on the data itself?
2
Daily versus monthly averaged values for better cluster analysis
2
Performing clustering after “seeing” that there are 3 clusters on the PCA scatter plot
4
How to interpret the representation of data in principal plane?