In Spearman's rank correlation: 4 out of 26 observations totally change the conclusion, what should I do?

After I remove these 4 observations, the results change from weak and not statistically significant to the opposite (rho=0.559 with p<0.01). Should I just remove them or what should I do? Although the Spearman correlation is robust against outliers, can I call these observations outliers? If so, how should I deal with them?

I am calculating the correlation coefficients by using this Excel file, which is taken from this website. Is it accurate?

Here are the data:

The phenomenon you observe is caused by the use of Spearman's $\rho$ coefficients, which has the undesirable property that it is easily swayed by the presence in the sample of even a few observations that happen to depart from the bivariate ellipse fitting of the bulk of the data.

The general solution to this problem is to replace the Spearman $\rho$ by a robust alternative. In a nutshell, robust estimation procedures were designed to fit a model that is cannot be easily swayed by a handful of non-conforming data-points.

A popular such algorithm is FastMCD [1,2]. The aim of FMCD is to find the model that best fits the central observations in your dataset. Observations that are far from the FMCD fit are flagged as outliers. They do not part take in the estimation of the coefficients fitted by FMCD. They should be modelled separately from the remaining bulk of the data: their very distance from the FMCD fit makes them unduly influential on any classical statistical analysis that would include them alongside the rest of the data-set.

Now, I turn to your specific problem. Here is the code to run FMCD on your dataset:

In short, the main advantage of the FMCD fit lies in its resilience (the technical term is robustness) to the contamination of the sample by a few inconsistent data points. For example, it would be very difficult to find 4 points such that by removing them will significantly alter the solution found by FMCD.

As suggested by @amoeba I'm illustrating the resilience of the FMCD to the removal of 4 data points from the set (those with indexes 20 23 24 26, these were picked by @amoeba, see comments below). Looking at the estimation results obtained re-running FMCD on this amputated data-set, 14 of the 16 observations not classified as outliers by the FMCD fit of the original data-set (and not subsequently removed from the data-set) still are classified as such. The Spearman $\rho$ of the good data went from $0.07$ (p=0.77) on the original data to $0.21$ (p=0.43) on the data set with the four observations selected by @amoeba removed (so the conclusions of the analysis remain the same).

@whuber suggested plotting a scatterplot of the rank of the data to better show the effect of the outliers. The observations flagged as outliers by FMCD are shown as red dots.

@Thomas Speidel. Spearman's $\rho$ has good robustness property, so long as the rate of contamination of the sample is smaller than 5%. For a more in depth (including formal) study of these issues, see [ 3]: 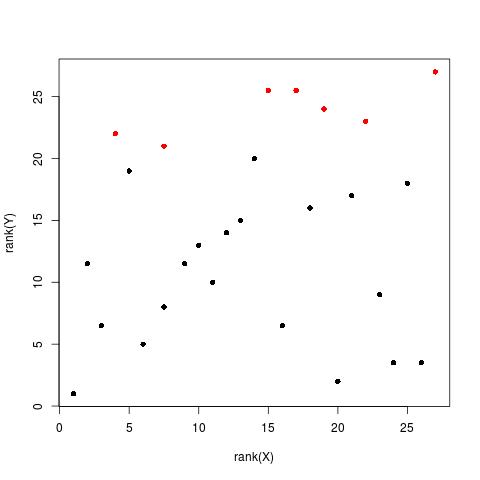 Not the answer you're looking for? Browse other questions tagged statistical-significance outliers spearman-rho or ask your own question.

10
Anomaly detection: what algorithm to use?
5
Robust estimates of the covariance matrix in the big data space
0
Correlation and Outliers