I just came by a post talking about networks for displaying correlations: 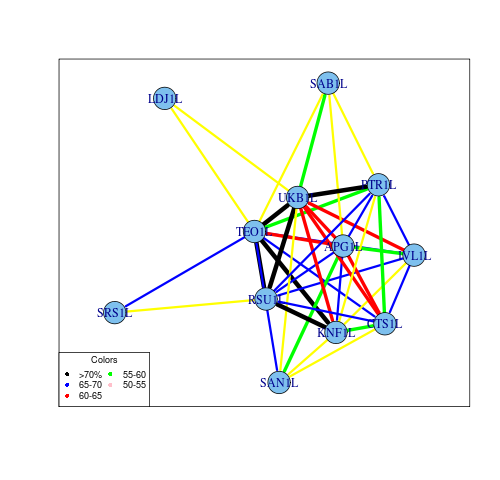 Is this a known method? Can someone shed some insights into it? (I'm wondering about how useful it might be, and when.)

Do you know the qgraph project (and the related R package)? It aims at providing various displays for psychometric models, especially those relying on correlations. I discovered this approach for displaying correlation measures when I was reading a very nice and revolutionary article on diagnostic medicine by Denny Borsboom and coll.: Comorbidity: A network perspective, BBS (2010) 33: 137-193.

An oversimplified summary of their network approach of comorbidity is that it is “hypothesized to arise from direct relations between symptoms of multiple disorders”, contrary to the more classical view where these are comorbid disorders themselves that causes their associated symptoms to correlate (as reflected in a latent variable model, like factor or item response models, where a given symptom would allow to measure a particular disorder). In fact, symptoms are part of disorder, but they don’t measure it (and this is a mereological relationship). Their figure 5 describes such a "comorbidity network" and is particularly interesting as it embeds the frequency of symptoms and magnitude of their bivariate association in the same picture. They were using Cytoscape at that time, but the qgraph project has now reached a mature state. 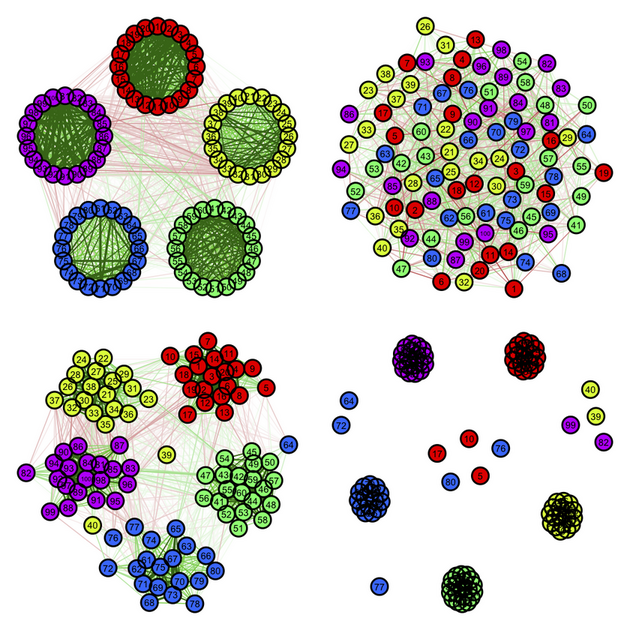 (See also help(qgraph.pca) for nice circular displays of an observed correlation matrix for the NEO-FFI, which is a 60-item personality inventory.)

Surprisingly, as a search of Google Images indicates, such graphs do not appear to be in common use to study or explain multiple correlations. That's a pity, because I'm sure much of this theory can be reduced to simple operations on graphs.

Nevertheless, this graphical method to display correlations (or their mathematical equivalents, cosines of angles) has been in use a long time (at least 75 years) in the form of a Coxeter-Dynkin diagram .

For instance, the A3 diagram 0--0--0 represents three variables X, Y, and Z where X and Z (the outer nodes) are uncorrelated and the correlations between X and Y and Z and Y are both -0.5. In the usual applications of these diagrams, certain special "correlations" (angles) are important, so a special method of labeling the edges with the correlations is used, but this functions no differently than using other forms of labeling such as colors.

When you use a "distance" metric monotonically related to correlation, then any 2D MDS calculation can be (and usually is) thought of as embedding this graph in the plane so that Euclidean distances reflect the correlations. This illustrates the intimate connection between correlation-based clustering methods and graphs of correlation. As another example in this vein, a dendrogram, when it is derived from a correlation-based similarity matrix, is another network-based way of displaying correlations. (However, it uses vertical position in an essential way to display similarity, and so is not a purely network-based method.)

Not the answer you're looking for? Browse other questions tagged data-visualization correlation or ask your own question.