I have a data-set of $P$ samples of size $N$, and noticed that the eigenvalues of the correlation matrices $A^TA$, when presented in descending order, can in many cases be described as an exponential decaying function. That is, there is a good fit linear of from $i=1..N$ to $\log|\lambda_i|$. Moreover, for several data sets I found that the exponent of the decay is fairly constant.

Is this a well-known fact or just one's tendency for finding patterns?

Obviously from PCA / SVD it tells me something about the ability to approximate the data using low-dimensional matrix.

Are there any solid mathematical results on the size of the exponent of this decay?

Everything has already been pretty much figured out in the comments, thanks to @AndyW, @whuber, and @UriCohen, but I would still like to write it up as a coherent answer.

First, let me illustrate the original question. Here is the eigenspectrum of some actual real data (neural recordings) that I happen to work with right now. First few (~20-30) PCs obviously carry some signal, but after that the eigenvalues start slowly decreasing in what does seem like an exponential fashion: note that the middle part of the spectrum is almost a straight line on this log-plot. I am not showing the last part of the spectrum, because there the eigenvalues decrease pretty much to 0, due to some temporal smoothing that I used before PCA. 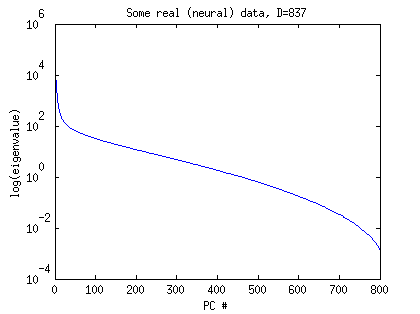 Question is: why exponential decay?

The answer is, I believe, that any high-dimensional real data are highly contaminated by noise, so the bulk of the eigenspectrum shows the spectral behaviour of pure noise. What is the spectrum of a random covariance matrix? Turns out, there is a nice asymptotic result given by Marchenko–Pastur distribution, see the pdf of the original 1967 paper in Russian if you like.

Let us verify. I generated a random matrix of the $1000 \times 1000$ size, computed its covariance matrix and then calculated the eigenspectrum. The first subplot below shows the covariance matrix. The second shows the distribution (histogram) of the eigenvalues and the Marchenko-Pastur function given above. It does fit perfectly. 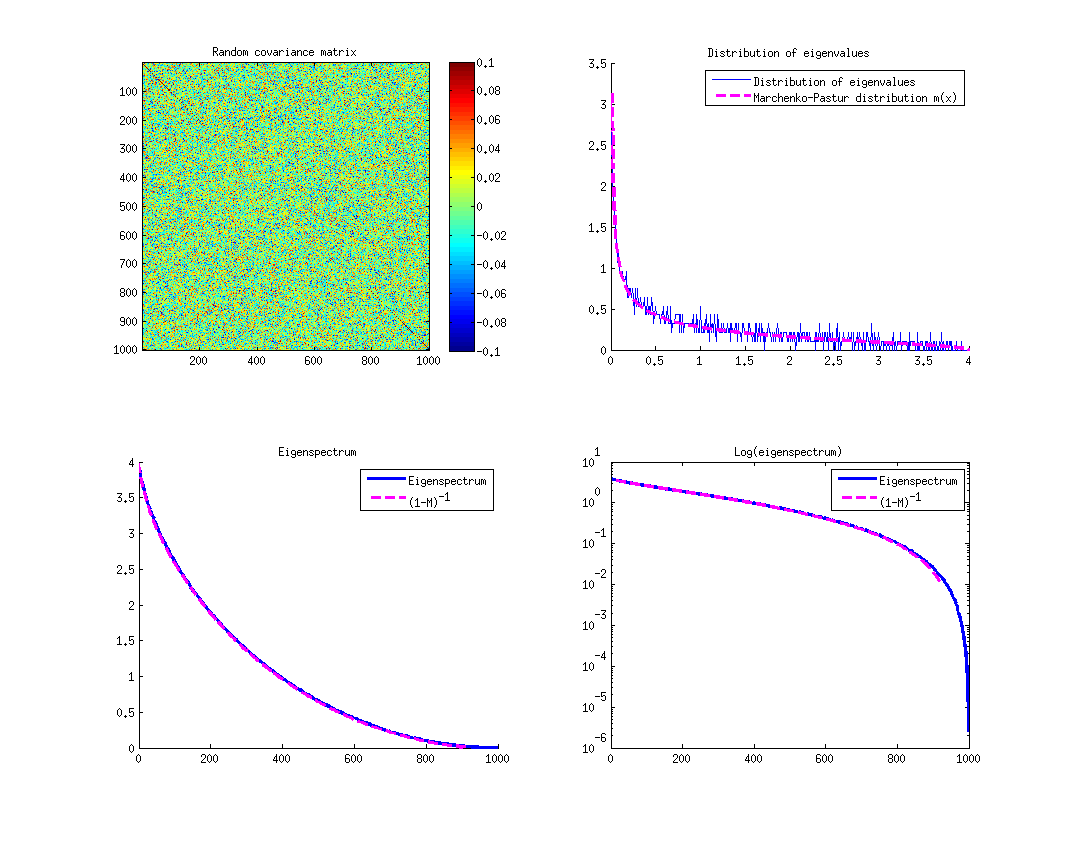 It is quite a mess to compute $M(x)$, here is Wolfram Alpha's attempt. But we can note that $\mu(x)$ in the middle of its domain (around $x\approx 2$) is very well approximated by a straight line. This means that $M(x)$ will be approximately quadratic, and so its inverse $S(x) \sim \mathrm{const}-\sqrt{x}$.

In other words, the decay is not exponential at all, it is a square-root decay! However, funny enough, it is close enough to the exponential shape so that on the log-plot (see the fourth subplot above) the middle part of the spectrum looks pretty straight.

Not the answer you're looking for? Browse other questions tagged correlation pca svd eigenvalues spectral-analysis or ask your own question.

33
Visualizing a million, PCA edition
3
Is it a good idea to use log scale on scree plots for PCA/ICA/FA?
2
Determine missing eigenvalues given only correlations between variables and components
2
Understanding the covariance matrix eigenvalue plot

1
PCA features intuition : number/decay of eigenvalues
2
Determine missing eigenvalues given only correlations between variables and components
5
How are eigenvalues/singular values related to variance (SVD/PCA)?
0
Eigenvalues from `prcomp`