There is a very confusing question in my mind. I have data, and would like to compare numeric scores between men and women.

There is a big difference in those two groups: the number of men is 34, while the number of women is 310, and variances are not equal.

As far as I know, when the variances are not equal, I can use the Welch–Satterthwaite equation (independent t-test assuming unequal variances). My question is: can I still use this equation although there is a really big difference in sample size between my two samples? Or is there a certain limit for the difference in sample size between two samples?

The use of a scaled chi-square distribution with degrees of freedom from the Welch–Satterthwaite equation for the estimate of the variance of the difference in sample means is merely an approximation - the approximation is better under some circumstances than others.

In fact, I think any approach to this problem will be approximate in one way or another; this is the famous Behrens-Fisher problem. As it says at the upper right in the link there, only approximate solutions are known.

So the short answer is it's essentially never exactly correct -- and you can use it any time you like --- if you can tolerate the fact that your significance levels and p-values are inexact as a result; as for how far you can be out and still be happy to use it depends on you. Some people are much more tolerant of approximate significance levels and p-values than others*

*(in the situations that I tend to use hypothesis tests, as long as I know the direction and some sense of a bound on the extent of the effect, I tend to be pretty tolerant of significance levels different from nominal; but if I were trying to publish a scientific result in a journal, I'd probably document the likely impact of the approximation - via simulation - in more detail.)

So how does the approximation behave?

All distributions are normal:

Type I error rates become smaller than nominal ('conservative') as the group sizes become more unequal. This affects both the Welch and the ordinary two sample test in the same direction. Power can also be low.

If the distributions are skew, the effects on both significance level and power can be more substantial, and you must be much more wary (with skewness and unequal variances, I often lean toward using GLMs, as long as the variances seem likely to relate to the mean in an appropriate way - e.g. if spread increases with mean, a Gamma GLM may work well)

This document discusses a small simulation study of the Welch test, the ordinary t-test and a permutation test under equal and unequal variances, and normal distributions and a skewed distributions. It recommended:

the test with Welch correction is useful when the data are normal, sample sizes are small, and the variances are heterogeneous.

This seems broadly consistent with what I've read at other times.

However, in a later section, reading the details of the simulation results more deeply, they go on to say:

Though that advice is based on very small sample sizes in the smaller sample. It was not carried out at the sort of sample sizes you have.

[When in doubt about the likely behavior of some procedure in some particular circumstance, I like run my own simulations. It's so easy in R that it's often a matter of only a couple of minutes - including coding, simulation runs and analysis of results - to get a good idea of the properties).]

I think that with one very large sample, and one medium sample size, as you have, there should still be relatively little problem applying Welch test. I'll double check with a simulation, right now.

I used your sample sizes. These simulations are under normality.

a. The group with the large sample has 3 times the population standard deviation of the small one.

b. The group with the small sample has 3 times the population standard deviation of the large on.

In fact the equal-variance test was so badly affected, that I wouldn't use it at all; there would be little point in comparing power without adjusting for the difference in the significance levels.

With such a large sample size (meaning the uncertainty in its mean is relatively very small), another possibility presents itself: to do a one-sample test against the mean of the large sample as if it were fixed. It turns out that when the smaller population standard deviation was in the larger sample, significance levels were very close to nominal. It works relatively well in this case.

When the larger population standard deviation was in the larger sample, type 1 error rates were somewhat inflated (this looks to be the opposite direction from the effect on the Welch test).

A discussion of permutation tests

AdamO and I got into a discussion about an issue I have with permutation tests for this situation (different population variances in a test for location difference). He asked me for a simulation, so I'll do it here. The link to the paper I gave above also does simulations for the permutation test that seem to be broadly consistent with my findings.

The basic problem is in the two sample test of location with unequal variance, under the null the observations are not exchangeable. We cannot interchange labels without significantly affecting the results.

Let's see this with a simulation, as requested.

My code isn't especially fancy but it gets the job done. I simulate equal means for the sample sizes mentioned in the question, under three cases:

One of the things we're interested in with hypothesis tests is 'if I keep sampling these populations and do this test many times, what is my type I error rate'?

We can compute this here. The procedure consists of drawing normal samples fitting the above conditions, with the same mean, and then computing the quantile of the sample in the permutation distribution. Because we do this many times, this involves simulating many samples, and then within each sample, resampling many relabellings of the data to get the permutation distribution conditional on that sample. For every simulated sample I get a single p-value (by comparing the difference in means on the original sample with the permutation distribution for that specific sample). With many such samples, I get a distribution of p-values. This tell us the probability, given two populations with the same mean, we are to draw a sample where we reject the null (this is the Type I error rate).

Here's the code for one such simulation (case 2 above):

Here are the results. 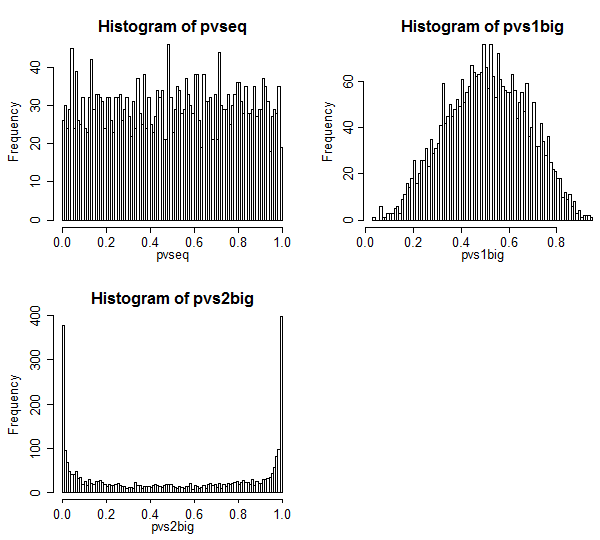 Case 1 is at the top left. In this case the values are exchangeable, and we see a pretty uniform-looking distribution of p-values.

Case 2 is at the top right. In this case, the larger sample has the larger variance and we see that the p-values are concentrated toward the center. We are much less likely to reject a null case at typical significance levels than we think we should. That is, the type I error rate is much lower than the nominal rate.

Case 3 is at the bottom right. In this case, the smaller sample has the larger variance, and we see that the p-values are concentrated at the two ends - under the null, we are much more likely to reject than we think we should. The significance level is much higher than the nominal rate.

Discussion of the Behrens Fisher problem in Good

The Good Book mentioned by AdamO does discuss this problem on p54-57.

He refers to a result of Romano that states that the permutation test is asymptotically exact providing they have equal sample sizes. Here, of course, they don't - rather than 50-50 they're roughly 90-10.

And when I simulate the equal sample size case (I tried n1=n2=34) the p-value distribution wasn't far off uniform** -- it was off a small amount but not enough to worry about. This is pretty well known and borne out by a number of published simulation studies.

Good says the behavior in the equal sample size case works down to quite small sample sizes. I believe him!

What about a bootstrap test?

So what if we were to try a bootstrap test instead of a permutation test?

With a bootstrap test*, my objections no longer hold.

*e.g. one approach might be to construct a CI for the difference in means and reject at the 5% level if a 95% interval for the mean doesn't include 0

With a bootstrap test, we're no longer required to be able to relabel across samples -- we can resample within the samples we have and still get a suitable CI for the difference in means. With some of the usual procedures to improve the properties of the bootstrap, such a test might work very well at these sample sizes.

One option, prompted by @Glen_b's response is a permutation test in which exposures (the group labels) are randomly permuted to obtain the sampling distribution of the test statistic under the null hypothesis, regardless of the parametric distribution of the data themselves.

Not the answer you're looking for? Browse other questions tagged t-test sample-size unbalanced-classes permutation-test or ask your own question.

0
Can I use independent t-test for my sample?
4
Calculating statistical significance with unequal sample sizes and unequal variances
1
We should verify first if the variances are equal with F-test before verify if the means are equal with t-test?
0
Is it valid to run unpaired t-tests with large N in one condition and small N in the other?