There is a bayesian network Asia: 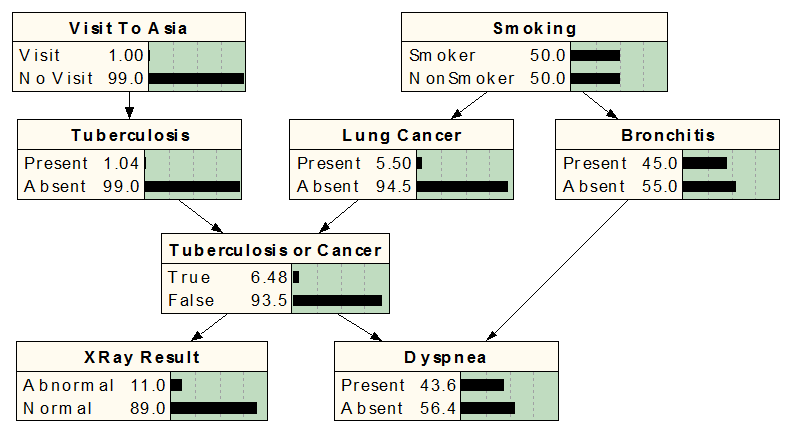 I am computing based on

How would you compute probabilities when you assign truth values to ceratin observable variables like?

For your four example questions, it looks rather easy, if I am reading this correctly.

The second, third and fourth ask for the probability the individual has tuberculosis or cancer given some combination of having them. That should be 1 each time.

But there is no such clarity for example with the relationship between a visit to Asia and tuberculosis. This is not independent as there is an arrow, but more individuals have tuberculosis than visited Asia. Are we supposed to assume that everyone who visited Asia now has tuberculosis? It does not say that.

@darkcminor: I wonder if the following short tutorial would help you (look especially at the chain rule and the section on inference). I have not looked at these for a long time, but I believe with a few principles you can figure out the values of any query. Some of them will just be onerous done by hand.

Not the answer you're looking for? Browse other questions tagged bayesian conditional-probability or ask your own question.

0
variable depending on 2 variables conditional probability