Is there a way / formula or technique to do this?

EDIT: Sorry i should have given the information on distribution. This is a data related web page performance timing. I am assuming it as approximately normal.

Yes. The result is contingent on the distributional assumptions, but seems to be somewhat robust to violations of those assumptions.

Analysis of the general problem

Let $F_\theta$ be the assumed distributional family with (vector) parameter $\theta$. For instance, $\theta=(\mu,\sigma)$ might parameterize the mean and SD of Normal distributions. The data are a sequence of statistics (count; max, median, 95th percentile). More generally let's suppose the data are of the form $(n_i, t_{i1}, t_{i2}, \ldots, t_{ip})$ where $n_i$ is the count for batch $i$ and $t_i=(t_{i1}, t_{i2}, \ldots, t_{ip})$ is the set of $p$ statistics. These are assumed to reflect a random sample from a distribution with parameter $\theta_i$. We probably should allow $\theta_i$ to vary from batch to batch.

What we hope to do is to estimate the value of each $\theta_i$ from the statistics $t_i$. Let these estimates be $\hat\theta_i$. The collection of batches then is a mixture consisting of each $F_{\theta_i}$ weighted by its count $n_i$. The problem is solved by computing any desired property of the mixture of estimated distributions $F_{\hat\theta_i}$, which I will call $\hat{F}$.

Measures of uncertainty, such as standard errors of the individual estimates $\hat\theta_i$, can be propagated into the mixture to obtain standard errors for parameters or properties of $\hat{F}$.

Solution of the specific problem

The percentiles (median and 95th percentile) of the mixture have to be found with numerical methods: there is no simple or closed formula.

The medians (red) and 95th percentiles (blue) of 24 hourly batches of data are plotted here, with the areas of the points proportional to the counts. The batch sizes range from $5$ through $63$. (Small batches were chosen for this example because they will tend to be non-normal and will exhibit more fluctuation than large batches, presenting difficulties for the proposed procedure.) There are 863 values represented in toto. 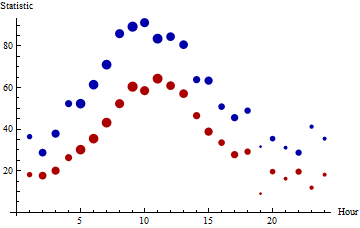 In the next figure, empirical distribution functions for the individual batches are plotted on top of the empirical distribution function for the entire set of daily values (with hues varying across the rainbow throughout the day). These hourly data were drawn from various Gamma distributions, not Normal distributions, calling into question the applicability of the normal assumption. The region below the EDF is shaded light gray. Superimposed on this (in heavy black) is the mixture estimate: in its upper range it coincides closely with the EDF. 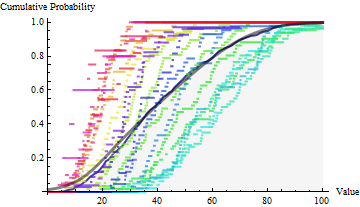 Comments on the Example

Because the statistics reflect the upper half of each batch, we can expect corresponding statistics for $\hat{F}$ to be reasonably good, but should not hold out much hope that statistics about the lower half of $\hat{F}$ (nor the upper 5%) are accurate. This can be seen in the preceding plot, where the full EDF (gray) and CDF of $\hat{F}$ (black) diverge for the smaller values at the bottom left.

A straightforward way to compute standard errors for these estimates would be through Monte-Carlo simulation or bootstrapping. Those results are not illustrated here.

To get an approximate estimate is possible, but it deepens on that is "approximate". Well, this is my suggestion on finding 95th percentile (the median could be find in the same way):

Let the set of hourly data stream be denoted $A_i$, which is not observed directly, but we have

So, we can analyse $count(z\in A_i:z<b)$ independently. Let denote it $S_i(b)$. Without any assumptions about distributions we can make some calculations.

With out assumption of normality you need some other assumptions. The most rough suggestion could be linear interpolation in the given range.

I hope that helped. Any other suggestions?

Not the answer you're looking for? Browse other questions tagged distributions quantiles or ask your own question.

14
Can I reconstruct a normal distribution from sample size, and min and max values? I can use mid-point to proxy the mean
3
How to estimate high end percentile (e.g. >90%)
0
How do I aggregate percentiles from previously aggregated percentiles?
1
How to summarize items and still calculate percentiles?

8
Is there a way to compute diversity in a population?
3
Density function from percentiles (P10, P25, P75, P90, mean and median)?
1
Is it possible to compute income percentile, given the median and the average?
2
Generate data with skewed distribution and known percentiles, mean and median
0
How can I calculate the mean and standard deviation given three percentiles using Matlab?
1
Difference between using a z-score or a percentiles to summarize data in normal and skewed distributions
4
Using bootstrap to estimate the 95th percentile and confidence interval for skewed data
30
Are there 99 percentiles, or 100 percentiles? And are they groups of numbers, or dividers or pointers to individual numbers?
2
Is there an equation for the median and percentile of a zero-inflated Poisson?