Can a fair coin test be applied to a coin that often lands on its edge?

If you flip a coin and get 268 heads and 98 tails, you can calculate the probability that coin is fair several ways. A simple, heuristic observation would have most likely conclude that such a coin is unfair. I've calculated the p-value in R with:

This value is smaller than .05, ergo we reject the hypothesis that it's a fair coin.

But what if you where told that the same coin landed on its side 676 times during the trial. Heuristically you'll likely come to the same conclusion, but would the typical fair coin tests still be valid?

Here is a graph to illustrate the problem: 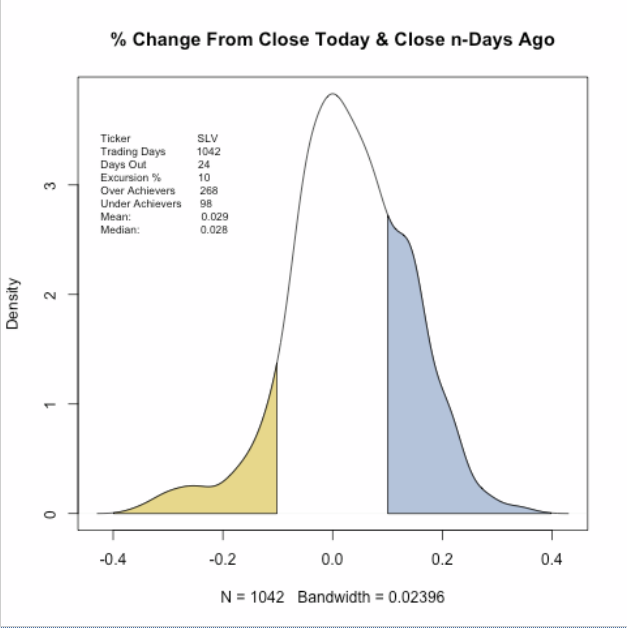 What are valid methods to test the hypothesis that there is equal probability that an event occurs in the shaded areas?

NOTE: there are 629 positive moves (413 negative) in the graph illustration.

R code that generates the data:

I'm pretty sure the answer is yes, the standard binomial 'fair coin' test is still valid: if you wish to test whether two of the three probabilities of a multinomial distribution are the same but you're not interested in any hypotheses about the third probability, you can analyse the numbers of the corresponding two outcomes as if they were drawn from a binomial distribution.

In fact this seems to make quite a nice exercise about sufficient statistics and conditional likelihood:

You can think of this as a multinomial distribution with three possible outcomes and hence two estimable parameters (as the three probabilities must sum to 1). But you're not interested in the probability of the 'middle' outcome, so you can take this to be the nuisance parameter, and the difference between the number of 'top' and 'bottom' outcomes to be the parameter of interest.

It's straightforward to show (using the Fisher–Neyman factorization theorem) that the numbers of 'top' and 'bottom' outcomes together form a (two-dimensional) sufficient statistic for the parameter of interest, i.e. the number of 'middle' outcomes doesn't provide any additional information about the value of the parameter of interest. The number of 'middle' outcomes is clearly a sufficient statistic for the nuisance prameter. If we condition on the latter, I think (haven't checked properly) that the resulting conditional likelihood will end up the same as the likelihood for the binomial distribution, i.e. the coin-tossing problem.

If you frame this as a binomial problem (p, 1-p), not a multinomial problem, you'll only be able to describe the past. You won't be able to say anything about the future. Why? Your removal of the middle "edge flips" is implied in your regrouping of the data.

In other words, your "data described" probability "p" of a positive result and probability "1-p" of a negative result will not apply on the next "binomial flip of the coin", because in the future you really have probabilities "x", "y", and "(1-x-y)".

I added the following diagram to help explain my comments below.

14
How can I predict the odds that a dodgeball team is going to win based on the winning history of its players?
3
Survival Analysis Applied when Individuals that "Died" can still Return
12
Checking if a coin is fair based on how often a subsequence occurs