I'm working on a classification problem that computes a similarity metric between two input x-ray images. If the images are of the same person (label of 'right'), a higher metric will be calculated; input images of two different people (label of 'wrong') will result in a lower metric.

I was looking into using a binomial proportion confidence interval (where I'd use the results of the cross-validation as a correct labeling or incorrect labeling for my number of successes). However, one of the assumptions behind the binomial analysis is the same probability of success for each trial, and I'm not sure if the method behind the classification of 'right' or 'wrong' in the cross-validation can be considered to have the same probability of success.

The only other analysis I can think of is to repeat the cross-validation X times and calculate the mean/standard deviation of the classification error, but I'm not sure if this is even appropriate as I'd be reusing the data from my relatively small sample size several times.

Any thoughts? I'm using MATLAB for all my analysis, and I do have the Statistics toolbox. Would appreciate any and all assistance!

Influence of instability in the predictions of different surrogate models

Well, usually that equvalence is an assumption that is also needed to allow you to pool the results of the different surrogate models.

In practice, your intuition that this assumption may be violated is often true. But you can measure whether this is the case. That is where I find iterated cross validation helpful: The stability of predictions for the same case by different surrogate models lets you judge whether the models are equivalent (stable predictions) or not.

Here's a scheme of iterated (aka repeated) $k$-fold cross validation: 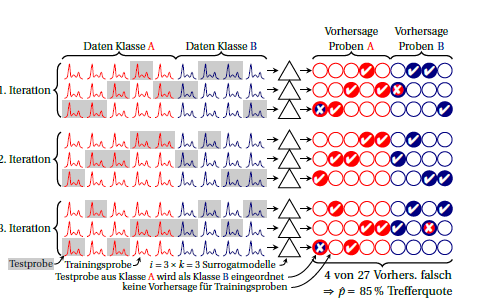 You can also calculate the performance for each iteration (block of 3 rows in the drawing). Any variance between these means that the assumption that surrogate models are equivalent (to each other and furthermore to the "grand model" built on all cases) is not met. But this also tells you how much instability you have. For the binomial proportion I think as long as the true performance is the same (i.e. independent whether always the same cases are wrongly predicted or whether the same number but different cases are wrongly predicted). I don't know whether one could sensibly assume a particular distribution for the performance of the surrogate models. But I think it is in any case an advantage over the currently common reporting of classification errors if you report that instability at all. I think you could report this variance and argue that as $k$ surrogate models were pooled already for each of the iterations, the instability variance is roughly $k$ times the observed variance between the iterations.

I usually have to work with far less than 120 independent cases, so I put very strong regularization on my models. I'm then usually able to show that the instability variance is $\ll$ than the finite test sample size variance. (And I think this is sensible for the modeling as humans are biased towards detecting patterns and thus drawn towards building too complex models and thus overfitting).
I usually report percentiles of the observed instability variance over the iterations (and $n$, $k$ and $i$) and binomial confidence intervals on the average observed performance for the finite test sample size.

The drawing is a newer version of fig. 5 in this paper: Beleites, C. & Salzer, R.: Assessing and improving the stability of chemometric models in small sample size situations, Anal Bioanal Chem, 390, 1261-1271 (2008). DOI: 10.1007/s00216-007-1818-6
Note that when we wrote the paper I had not yet fully realized the different sources of variance which I explained here - keep that in mind. I therefore think that the argumentation for effective sample size estimation given there is not correct, even though the application conclusion that different tissue types within each patient contribute about as much overall information as a new patient with a given tissue type is probably still valid (I have a totally different type of evidence which also points that way). However, I'm not yet completely sure about this (nor how to do it better and thus be able to check), and this issue is unrelated to your question.

Which performance to use for the binomial confidence interval?

Note that some methods to calculate binomial confidence intervals work also if the observed number of successes is not an integer. I use the "integration of the Bayesian posterior probability" as described in
Ross, T. D.: Accurate confidence intervals for binomial proportion and Poisson rate estimation, Comput Biol Med, 33, 509-531 (2003). DOI: 10.1016/S0010-4825(03)00019-2

(I don't know for Matlab, but in R you can use binom::binom.bayes with both shape parameters set to 1).

(Thinking more about these things is on my research todo-list..., but as I'm coming from experimental science I like to complement the theoretical and simulation conclusions with experimental data - which is difficult here as I'd need a large set of independent cases for reference testing)

Update: is it justified to assume a biomial distribution?

I see the k-fold CV a like the following coin-throwing experiment: instead of throwing one coin a large number of times, $k$ coins produced by the same machine are thrown a smaller number of times. In this picture, I think @Tal points out that the coins are not the same. Which is obviously true. I think what should and what can be done depends on the equivalence assumption for the surrogate models.

If there actually is a difference in performance between the surrogate models (coins), the "traditional" assumption that the surrogate models are equivalent does not hold. In that case, not only is the distribution not binomial (as I said above, I have no idea what distribution to use: it should be the sum of binomials for each surrogate model / each coin). Note however, that this means that the pooling of the results of the surrogate models is not allowed. So neither is a binomial for $n$ tests a good approximation (I try to improve the approximation by saying we have an additional source of variation: the instability) nor can the average performance be used as point estimate without further justification.

If on the other hand the (true) performance of the surrogate is the same, that is when I mean with "the models are equivalent" (one symptom is that the predictions are stable). I think in this case the results of all surrogate models can be pooled, and a binomial distribution for all $n$ tests should be OK to use: I think in that case we are justified to approximate the true $p$s of the surrogate models to be equal, and thus describe the test as equivalent to the throwing of one coin $n$ times.

I think your idea of repeating cross-validation many times is right on the mark.

Repeat your CV let's say 1000 times, each time splitting your data into 10 parts (for 10-fold CV) in a different way (do not shuffle the labels). You will get 1000 estimations of the classification accuracy. Of course you will be reusing the same data, so these 1000 estimations are not going to be independent. But this is akin to bootstrap procedure: you can take standard deviation over these accuracies as the standard error of the mean of your overall accuracy estimator. Or a 95% percentile interval as the 95% confidence interval.

Alternatively, you can combine cross-validation loop and the bootstrap loop, and simply select random (maybe stratified random) 10% of your data as a test set, and do this 1000 times. The same reasoning as above applies here as well. However, this will result in higher variance over repetitions, so I think the above procedure is better.

If your misclassification rate is 0.00, your classifier makes zero errors and if this happens on each bootstrap iteration, you will get zero wide confidence interval. But this would simply mean that your classifier is pretty much perfect, so good for you.

Classification error is both discontinuous and an improper scoring rule. It has low precision, and optimizing it selects on the wrong features and gives them the wrong weights.

Not the answer you're looking for? Browse other questions tagged classification confidence-interval cross-validation matlab or ask your own question.

7
Significance testing of cross-validated classification accuracy: shuffling vs. binomial test
12
Are there any contemporary uses of jackknifing?
1
How to report a SVM model to a 3rd party after cross-validation?
0
Confidence Intervals for the Classification Accuracy

2
Success of a logistic regression model
2
Confidence interval for classification error: binomial assumption vs. bootsrap resampling
7
Significance testing of cross-validated classification accuracy: shuffling vs. binomial test
1
How to use k-fold cross validation in naive bayes classifier?
3
30% difference on accuracy between cross-validation and testing with a test set in weka? is it normal?
3
What am I doing wrong in finding the confidence interval?
3
Classification (regression) with rolling window for time series-type data
0
Incomprehensible lowering of VGG19's accuracy if data is preprocessed
9
Wikipedia's text about the Clopper-Pearson interval for binomial proportions