I would like to regress the values on the y-axis by the values of the x-axis. As you can see, the relationship is not linear. Values of y are only positive can not exceed 4, values of x are always positive.

Is it possible (and do you think it is a good idea) to do the following:

That way I hope to get a nice smooth monotonic rising regression function through the data. (I want to avoid the decrease of the at the end of the X range of the LOESS fit as it is not meaningful)

Do you think this is a good idea and is this possible in R? 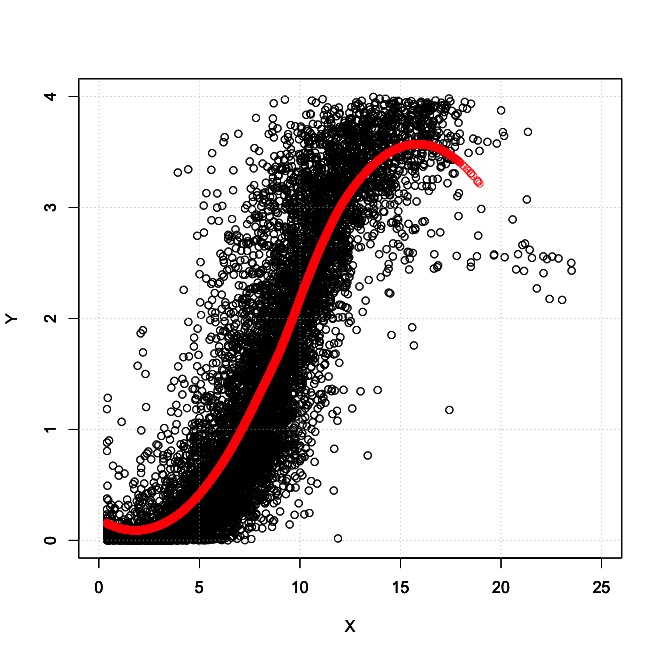 As @Scortchi said, it's probably not a good idea, especially if all you're trying to accomplish is as you've described it. You seem to have a cluster of data in the $X=[18–23],Y=[2.2–2.7]$ range; that might be influencing your LOESS model. You seem convinced that those data aren't meaningful, but be careful not to discount them if only because they complicate your model. If you have better reasons to discount them in mind, it may be unnecessary to model them at all.

Still, excluding them might not make a big difference. It looks like your $Y$ range is restricted and causing some ceiling and floor effects. If you model $Y(X)$ as a polynomial function of at least degree three (or a LOESS model, clearly), you'll pick up that flattening of the otherwise monotonic function beyond the values of $X$ for which $Y(X)\approx0\text{ or }4$. In case you don't have an idea of how $Y(X)$ would work as a polynomial function of degree three, I've tweaked a model in WolframAlpha:

You might want to explore alternatives for handling ceiling / floor effects in regression, if that's really what's going on here, and if you're sure that odd patch of observations beyond $X>17$ is negligible. Some other useful questions about models of bounded dependent variables exist here, including:

Since you asked about polychotomization, here are some points on why to not do it:

Nonetheless, I don't want to leave you thinking that your ideas are unmanageable, indefensible, or otherwise just plain terrible...(and I also want to offer those I've tagged here something to mull over!) You can smooth the dummy coefficients for a polytomous, ordinal, independent variable so that adjacent values don't differ too sharply using penalized regression, which (thanks yet again to Scortchi) I've mentioned in answers to these two questions:

Not the answer you're looking for? Browse other questions tagged nonlinear-regression or ask your own question.

86
What is the benefit of breaking up a continuous predictor variable?
25
How to model this odd-shaped distribution (almost a reverse-J)
17
Continuous dependent variable with ordinal independent variable
17
How to choose between ANOVA and ANCOVA in a designed experiment?
9
Extending logistic regression for outcomes in the range between 0 and 1
13
Tobit model explanation
7
Justification for low/high or tertiary splits in ANOVA
11
Dealing with regression of unusually bounded response variable
12
Logistic quantile regression – how to best convey the results
6
extremely left-skewed response variable - how do I model this dataset?
See more linked questions

13
How to choose initial values for nonlinear least squares fit
1
Type of regression method to use
12
What is the most appropriate way to transform proportions when they are an independent variable?
1
How to analyze non-linear unbalanced yearly data
3
How does one compare the statistical performance of different models on a regression or function approximation task over different data sets?