I have two variables, and the relationship between them looks like that in this plot: 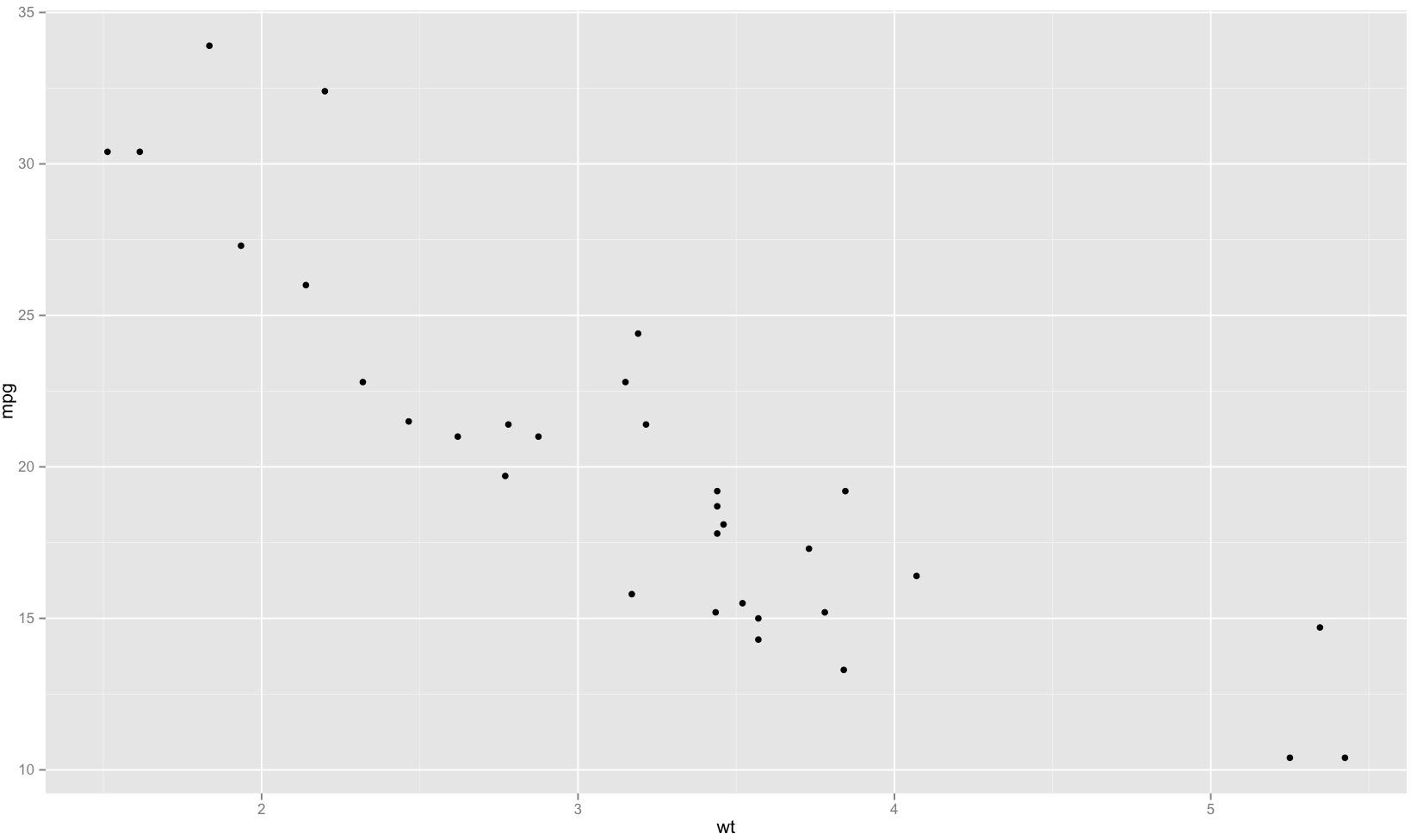 The relationship between mpg and wt is best described by entering wt as a quadratic term, like this:

I believe interaction effects are potentially meaningful for both linear and quadratic terms, so if you really want to test for both, you should use your third equation, or possibly a variant of it:

This version centers the variables before multiplying them to remove nonessential multicollinearity. However, I'm not entirely sure this is useful, as I haven't figured out the "when to center" issue. If you're concerned enough to try to figure that one out for yourself, please let me know if you succeed. Conveniently enough, I've collected some references on a recent answer of mine here. Anyway...

Wrapping the above function in summary() produces the following results:

This much is clear enough: mpg decreases as cyl increases $(b=-1.5)$ when controlling wt. FWIW, only cyl's coefficient differs significantly from zero $(t_{(26)}=-3.2,p=$ $.004)$. Nonetheless, I'll interpret all these coefficients for the sake of demonstration. mpg's relationship with wt is complex in this model, and it depends on cyl. BTW, the only reason cyl's relationship with mpg isn't so complex is that we haven't included a quadratic cyl term or its interaction with the mpg terms – and I don't know what's stopping us, other than my concern for limiting the scope of this answer. Still, the cyl interactions apply to cyl's relationship with mpg too, so that relationship depends on wt too. Specifically, cyl's relationship with mpg becomes less negative as wt increases linearly $(b=.2)$, but more negative as wt$^2$ increases $(b=-.8)$. I.e., more cylinders means burning more gas to travel a mile for cars of similar weight, but there's more of a difference between the lighter cars across cylinder classes (4, 6, & 8) than between heavier cars in this dataset (note I'm not generalizing to cars outside the dataset because most results are insignificant) through both the linear and quadratic interaction terms in the relationship function.

For instance, median(mtcars$cyl)$=6$. The cars with 8 cylinders reverse the quadratic relationship with extra weight $(.8\cdot$ wt$^2-.8\cdot2$ wt$^2=-.8\cdot$ wt$^2$, roughly), so fuel efficiency drops off more rapidly with extra weight...though the linear relationship with weight is slightly more merciful in the 8-cylinder class. Conversely, the 4-cylinder class of cars has some super-efficient lightweights, and the heavyweights are relatively even in efficiency among themselves, though much less efficient than the lightweights. Fuel efficiency among the 4-cylinder cars relates more strongly to weight via both the linear negative and quadratic positive terms.

Interactions like these get very confusing. The wise way to sort it out is to produce plots. Here's a three-dimensional plot of this overall model of the mtcars data using WolframAlpha:

$y=19.1-1.2x-1.5z+.8x^2+.2xz-.8x^2z$ In this quadratic multinomial function, $x=$ wt $-\mu_\text{wt},\ y=$ mpg, and $z=$ cyl $-\mu_\text{cyl}$. All of this seems very richly informative, but don't be fooled. Once I break this down into three functions of wt for the separate cyl classes and plot them over scatterplots, I think you'll see why only the main effect of cyl was significant: the linear and quadratic trends over wt aren't that strong when considered separately in each cyl class, they really don't vary that dramatically across classes, and several of the too-few data points have nontrivial residuals.

R code for the figure above using the ggplot2 package thanks to UCLA Stat Consulting Group:

First-timer with ggplot2 here BTW; hope I pulled it off passably! Critiques welcome!

If there is no theory and you just want to find the best fit, you can have a look at the AIC values of the models.

The third model has the lowest AIC score and is therefore the "best" model.

Of course, this model selection depends on using AIC scores as a criterion. If you use another criterion, e.g., BIC scores, the result can be different:

You have to choose a criterion for the model selection.

There's a school of thought that suggests you always start with ~wt$^n\cdot$ cyl, then start removing insignificant terms. This specification includes all powers up to $n$ and all interactions. In this case $n=2$, so you start with 5 terms. You never remove lower-order terms before higher-order; e.g. if wt² stays then wt will stay too, if wt $\cdot$ cyl stays then wt and cyl stay too.

Not the answer you're looking for? Browse other questions tagged r regression interaction or ask your own question.