How to calculate discrete interval coverage?

What I know how to do:

What I don't know how to do:

How do I do this for a discrete model, such as poisson or gamma-poisson? What I have for this model is as follows, taking a single observation (out of over 100,000 I plan to generate:)

Predicted probability of 100 (or to some otherwise unrealistic figure): .000

Actual value (an integer such as "4")

Note that while I've given poisson values above, in the actual model a predicted value of 1.5 may have different predicted probabilities of 0,1,...100 across observations.

I'm confused by the discreteness of the values. A "5" is obviously outside the 95% interval, since there's only .019 at 5 and above, which is less than .025. But there will be a lot of 4's -- individually they are within, but how do I jointly evaluate the number of 4's more appropriately?

Why do I care?

The models I'm looking at have been criticized for being accurate at the aggregate level but giving poor individual predictions. I want to see how much worse the poor individual predictions are than the inherently wide confidence intervals predicted by the model. I'm expecting the empirical coverage to be worse (e.g. I might find 88% of the values lie within the 95% confidence interval), but I hope only a bit worse.

Confidence intervals for binomial proportions offer a clear illustration of this issue. Neymanian assessment of intervals yields the irregular coverage plots like this, which is for 95% Clopper-Pearson intervals for n=10 Binomial trials: 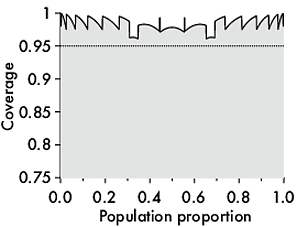 There is an alternative way to do coverage, one that I personally think is much more intuitively approachable and (thus) useful. The coverage by intervals can be specified conditional on the observed result. That coverage would be local coverage. Here is a plot showing local coverage for three different methods of calculation of confindence intervals for binomial proportions: Clopper-Pearson, Wilson's scores, and a conditional exact method that yield intervals identical to Bayesian intervals with a uniform prior: 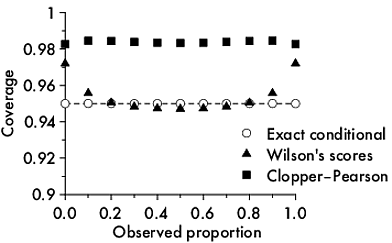 Notice that the 95% Clopper-Pearson method gives over 98% local coverage but the exact conditional intervals are, well, exact.

A way to think of the difference between the global and local intervals is to consider the global to be inversions of Neyman-Pearson hypothesis tests where the outcome is a decision that is made on the basis of consideration of long-term error rates for the current experiment as a member of the global set of all experiments that might be run. The local intervals are more akin to inversion of Fisherian significance tests which yield a P value which represents evidence against the null in from this particular experiment.

(As far as I know, the distinction between global and local statistics was first made in an unpublished Masterâ€™s thesis by Claire F Leslie (1998) Lack of confidence : a study of the suppression of certain counter-examples to the Neyman-Pearson theory of statistical inference with particular reference to the theory of confidence intervals. That thesis is held by the Baillieu library at The University of Melbourne.)

Not the answer you're looking for? Browse other questions tagged confidence-interval discrete-data or ask your own question.