What are the best methods to accurately generate random integers distributed according to a power law? The probability of getting $k$ ($k=1,2,\ldots$) should be equal to $p_k = k^{-\gamma} / \zeta(\gamma)$ and the method should work well for any $\gamma > 1$.

I can see two naive approaches:

Is there a better method that is also accurate (not approximate)?

I think (a slightly modified version of) method 2 is quite straightforward, actually

Using the definition of the Pareto distribution function given in Wikipedia

To be more explicit: if you generate from a Pareto with $x_m=\frac{1}{2}$ and $\alpha=\gamma$ and round to the nearest integer (rather than truncate), then it seems to be possible to use rejection sampling with $M = p_1/q_1$ -- each generated value of $x$ from that process is accepted with probability $\frac{p_x}{Mq_x}$. 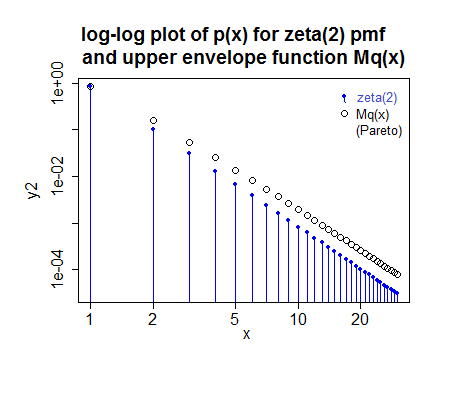 ($M$ here was slightly rounded up since I'm lazy; in reality the fit for this case would be a tiny bit different, but not enough to look different in the plot - in fact the small image makes it look a tad too small when it's actually a fraction too large)

More careful tuning of $x_m$ and $\alpha$ ($\alpha=\gamma-a$ for some $a$ between 0 and 1 say) would probably boost efficiency further, but this approach does reasonably well in the cases I've played with.

If you can give some sense of the typical range of values of $\gamma$ I can take a closer look at efficiency there.

Method 1 can be adapted to be exact, as well, by performing method 1 almost always, then applying another method to deal with the tail. This can be done is ways that may be very fast.

For example, if you take an integer vector of length 256, and fill the first $\lfloor 256 p_1\rfloor$, values with 1, the next $\lfloor 256 p_2\rfloor$ values with 2 and so on until $256 p_i <1$ -- that will almost use up the whole array. The remaining few cells then indicate to move to a second method which combines dealing with the right tail and also the tiny 'left-over' bits of probability from the left part.

The left remnant might then be done by a number of approaches (even with, say 'squaring the histogram' if it is automated, but it doesn't have to be as efficient as that), and the right tail can then be done using something like the above accept-reject approach.

The basic algorithm involves generating an integer from 1 to 256 (which requires only 8 bits from the rng; if efficiency is paramount, bit-operations can take those 'off the top', leaving the remainder of the uniform number (it would best be left as an unnormalized integer value to this point) able to be used to deal with the left remnant and right tail if required.

Carefully implemented, this kind of thing can be very fast. You can use different values of $2^k$ than 256 (e.g. $2^{16}$ might be a possibility), but everything is notionally the same. If you take a very large table, however, there may not be enough bits left in the uniform for it to be suitable for generating the tail and you need a second uniform value there (but it becomes very rarely needed, so it's not much of an issue)

As far as I am aware,the state of the art on power laws is the paper by Clauset, Shalizi and Newman which discusses your problem in Appendix D. Note in particular (where $y$ is a draw from a continuous power law) they say:

Other approximate approaches for generating integers, such as rounding down (truncating) the value of y, give substantially poorer results and should not be used.

Because the exact computation is expensive, an approximate method is also given, which is to define $$x = \lfloor \frac{1}{2}(1-r)^{-1/(1-\gamma)} + \frac{1}{2}\rfloor$$ which is not quite the same as just rounding values from the continuous power law. The error of this approximation is given in Equation (D.7) of Clauset et al. and depends on $\gamma$.

Not the answer you're looking for? Browse other questions tagged random-generation discrete-data power-law or ask your own question.