extremely left-skewed response variable - how do I model this dataset?

This is a histogram showing my response variable. 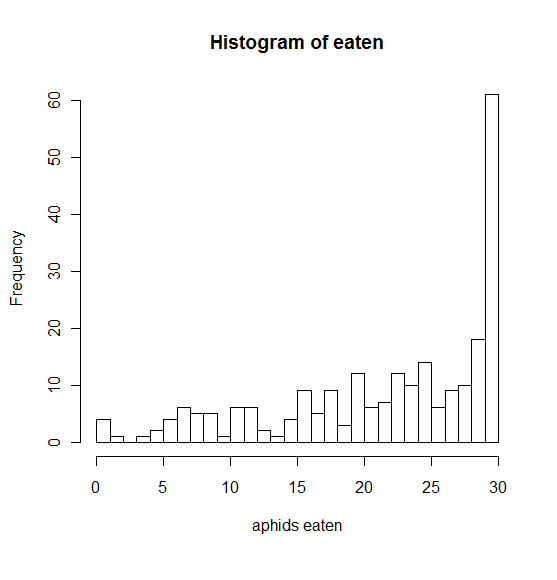 The response is # (or proportion? or percent?) of aphids eaten off of cards in fields, to model predation by natural enemies.

I've been working on this so far with the response variable reflected ('number of aphids remaining' rather than 'number of aphids eaten') so that it's right skewed instead which seemed more possible. But I would rather work with it as left-skewed if possible, the results will be easier to discuss that way.

Transformations do not help the response variable be less skewed.

GLMM with Poisson errors does not work because the models created are too overdispersed. GLMM with negative binomial errors - same problem. Any way I try to model this data that treats the response variable as continuous, gives me problematic things when I'm model checking, like residuals by fitted plots that have clear patterns in them, and overdispersion. I'm starting to wonder if I need to somehow rank the data in the response instead? Or partition it into categories?

The potential solution I've gotten to is hurdle models:

Does anybody have any other ideas for how to model this dataset?

TIA for any help, so appreciated. This dataset has been a thorn in my side for way too long!!

Hurdle models and zero-inflated models could both work on the inverted variable. If you wanted to keep it as is, you might have to do some programming.

In R the pscl package offers both hurdle and zeroinfl functions. There is a vignette here that also covers some other packages that do some of the same things.

This being R, if you do want to play with the program, you can see the code easily enough:

@whuber's answer to a related question ("How to model this odd-shaped distribution (almost a reverse-J)") recommends censored regression and provides an example with the censReg package. Your case appears more strictly right censored, but you might have a tiny bit of true zero-inflation too (not worth worrying about according to my intuition, which is not based on direct experience). It should be possible to calculate AIC for these models (cf. Wang, Liu, Lu, Latengbaolide, & Lu, 2011). BTW, partitioning into categories (polychotomization) is generally a bad idea (see my answer here for more).

Not the answer you're looking for? Browse other questions tagged mixed-model negative-binomial-distribution glmm skewness poisson-regression or ask your own question.

0
Null GLMM Poisson underestimate the mean of the response variable. Is it indicative of poor fitting?
1
Alternative to GLMM for normalised ratio (Bounded: -1 to 1) response variable
1
Predictions from Poisson GLMM (lme4) lower compared to GLM
0
Could this variable be modeled by a poisson regression?
4
How do I interpret this hurdle model summary (pscl)?