I have a sample of 5 numbers from known interval [0, 10]. Is 5 numbers is enough to make some conclusions about whether these numbers are drawn from uniform distribution or not?

Not with much reliability, unless it's extremely nonuniform.

If you're expecting U-shaped alternatives, you might consider say an Anderson-Darling test, (it usually shows up well in power studies, so it's a good one to keep in mind more generally) -- but the power at $n=5$ is going to be quite low.

It's substantially more powerful than the Kolmogorov-Smirnov test on U-shaped alternatives.

With hill-shaped alternatives (like a beta(3,3), say), at n=5 the Anderson-Darling is very biased (i.e. has much less than $\alpha$ probability to reject), so it's not a great choice there, and the Kolmogorov-Smirnov test does better (though it, too, is biased - which means you have more power against a beta(3,3) by rolling a 20 sided die and rejecting when it comes up with a '1').

Here's an idea of how serious the bias problem is at n=5 (here I used a significance level of 10%, since $n$ is so small): 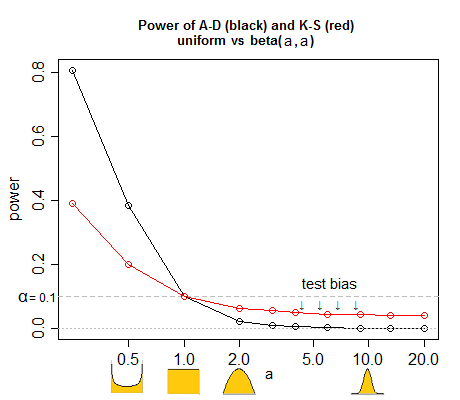 With those problems in mind, here are some followup questions:

Why are you testing uniformity?

Do you have any sense of likely alternatives?
(If you can narrow down the alternatives, you may be able to construct a test that has at least a little bit of power.)

What are the relative costs of the two types of error?

Not the answer you're looking for? Browse other questions tagged hypothesis-testing goodness-of-fit uniform or ask your own question.