What's the easiest way to separate two populations in a scatterplot?

I have to separate two populations by a line in a scatterplot: 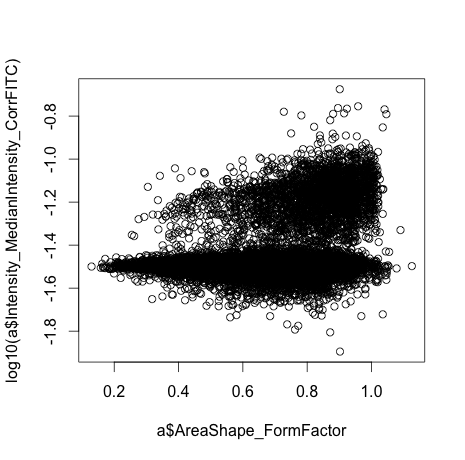 I would like find a threshold that separates the two populations. In @Waynes words, I would like to cluster the points into two categories, then calculate the line which best separates them. What is the easiest way to accomplish this in R? I've tried the Otsu algorithm on the raw data, but I don't know if this one is robust enough for other datasets.

Edit: I don't know which dot belongs to which population. The data is not multivariate, I only have an X and a Y value, as seen in the dotplot.

I am sure there is a much simpler solution to this problem but something that will work is to first use K-means with two clusters. Once you know the class membership of each point, fit an SVM.

I would agree with the previous answer, K-means is easy and effective. However, the K-means algorithm just lets you find structure in the data. I would not use the results as labels to train a supervised learning algorithm, like an SVM. Labels like the ones used for training imply a stronger claim to categorical knowledge than simple structural patterns.

Not the answer you're looking for? Browse other questions tagged r classification clustering threshold or ask your own question.

5
Visualizing the distribution of something within a very large body of data
2
Clustering large and sparse datasets
30
What's a good way to use R to make a scatterplot that separates the data by treatment?
3
How do I cluster data where some observation can not be in the same cluster?
0
Fit of a normal distribution to a one-dimensional dataset in R
13
How can a multiclass perceptron work?
0
Statistical test/method to create clusters or determine similarity between groups with many values for a single classifier