I have a confusion on biased maximum likelihood (ML) estimators. The mathematics of the whole concept is pretty clear to me but I cannot figure out the intuitive reasoning behind it.

Given a certain dataset which has samples from a distribution, which itself is a function of a parameter that we want to estimate, the ML estimator results in the value for the parameter which is most likely to produce the dataset.

I cannot intuitively understand a biased ML estimator in the sense that: how can the most likely value for the parameter predict the real value of the parameter with a bias towards a wrong value?

the ML estimator results in the value for the parameter which is most likely to occur in the dataset.

Given the assumptions, the ML estimator is the value of the parameter that has the best chance of producing the data set.

I cannot intuitively understand a biased ML estimator in the sense that "How can the most likely value for the parameter predict the real value of the parameter with a bias towards a wrong value?"

What is the basis on which it is surprising they don't necessarily correspond?

I'd suggest you consider some simple cases of MLE and ponder how the difference arises in those particular cases. 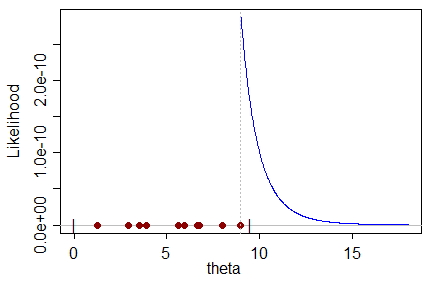 But on the other hand it must be biased, since the largest observation is obviously (with probability 1) smaller than the true value of $\theta$; any other estimate of $\theta$ not already ruled out by the sample itself must be larger than it, and must (quite plainly in this case) be less likely to produce the sample.

This lies to the right of the MLE, and so has lower likelihood.

MLE is only asymptotically unbiased, and often you can adjust the estimator to behave better in finite samples. For example, the MLE of the variance of a random variable is one example, where multiplying by $\frac{N}{N-1}$ transforms it.

Bias is a measure of accuracy, but there's also a notion of precision. 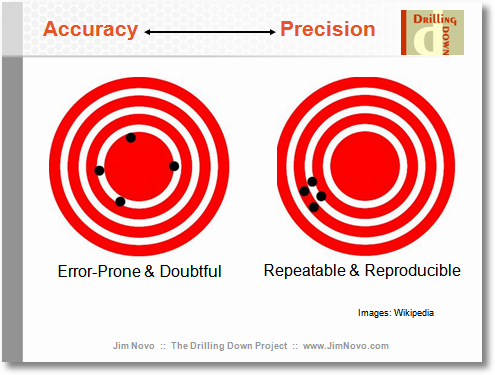 In an ideal world, we'd get the estimate, which is both precise and accurate, i.e. always hits the bull's eye. Unfortunately, in our imperfect world, we have to balance accuracy and precision. Sometimes we may feel that we could give a bit of accuracy to gain more precision: we trade-off all the time. Hence, the fact that an estimator is biased doesn't mean that it's bad: it could be that it's more precise.

The ordinary-language and technical meanings of biased are different. The answer by @Glen_b gives a good description of why maximum likelihood estimators can easily be biased in the technical sense.

It is possible for the maximum likelihood estimator to be biased in something like the ordinary-language sense, but it's not usual. Something has to go wrong.

The standard examples of an inconsistent MLE involve paired data.

In both cases, the problem is having the number of parameters grow with $n$, and the solution is a conditional likelihood that removes the $n$ intercept parameters before estimating the parameter you're interested in.

Not the answer you're looking for? Browse other questions tagged maximum-likelihood bias intuition or ask your own question.

117
Maximum Likelihood Estimation (MLE) in layman terms
23
How to understand that MLE of Variance is biased in a Gaussian distribution?

10
Is bias a property of the estimator, or of particular estimates?
20
Is there an example where MLE produces a biased estimate of the mean?
11
Bayes estimator are immune to selection Bias
1
comparison of distributions based on the maximum likelihood