Does the sign of scores or of loadings in PCA or FA have a meaning? May I reverse the sign?

I performed principal component analysis (PCA) with R using two different functions (prcomp and princomp) and observed that the PCA scores differed in sign. How can it be?

Why do the signs (+/-) differ for the two analyses? If I was then using principal components PC1 and PC2 as predictors in a regression, i.e. lm(y ~ PC1 + PC2), this would completely change my understanding of the effect of the two variables on y depending on which method I used! How could I then say that PC1 has e.g. a positive effect on y and PC2 has e.g. a negative effect on y?

In addition: If the sign of PCA components is meaningless, is this true for factor analysis (FA) as well? Is it acceptable to flip (reverse) the sign of individual PCA/FA component scores (or of loadings, as a column of loading matrix)?

So, why does the interpretation stays the same?

Possibly, the easiest way to see that is to use a biplot. 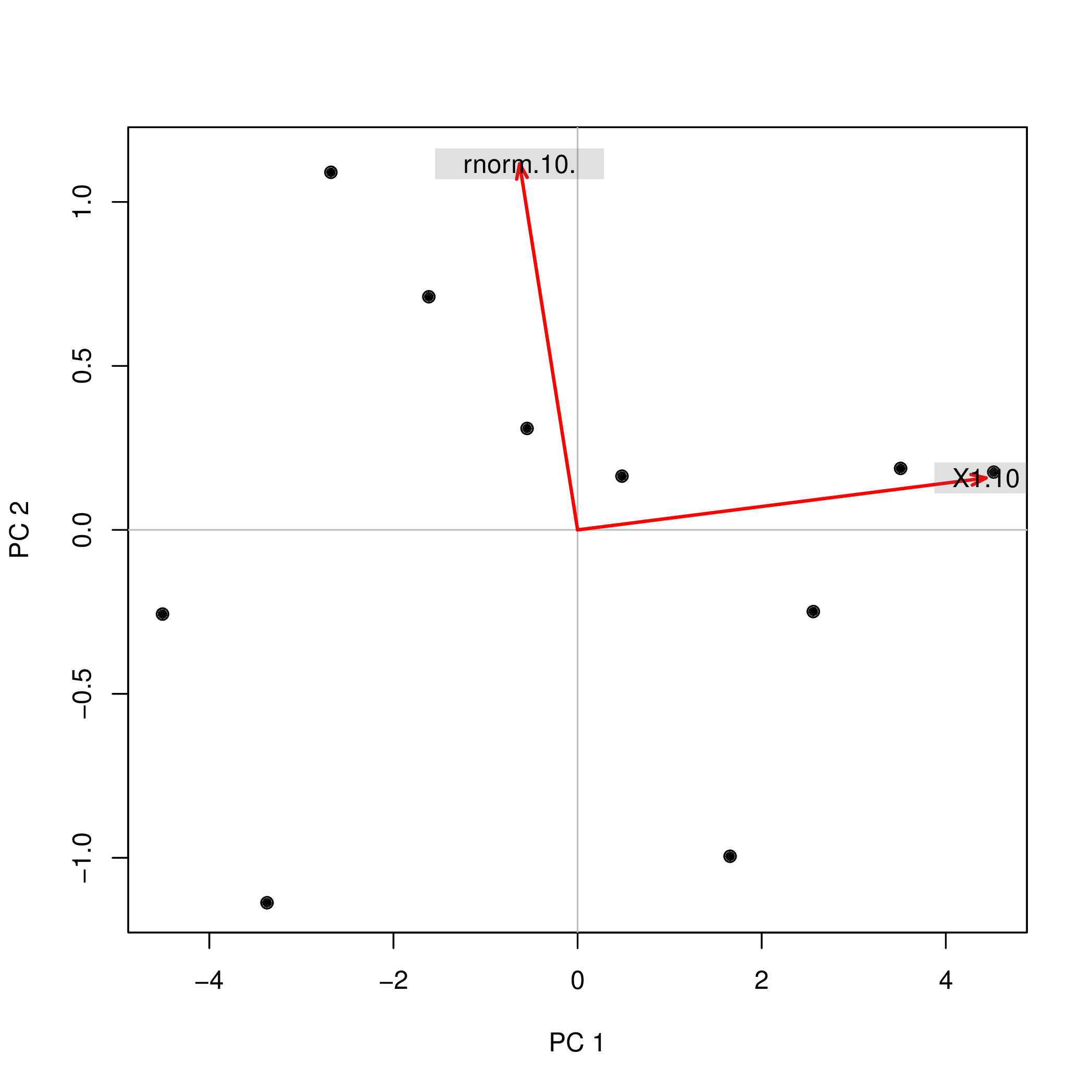 The same biplot for the second variant shows

As you see, the images are rotated by 180°. However, the relation between the weights / loadings (the red arrows) and the data points (the black dots) is exactly the same; thus, the interpretation of the components is unchanged. 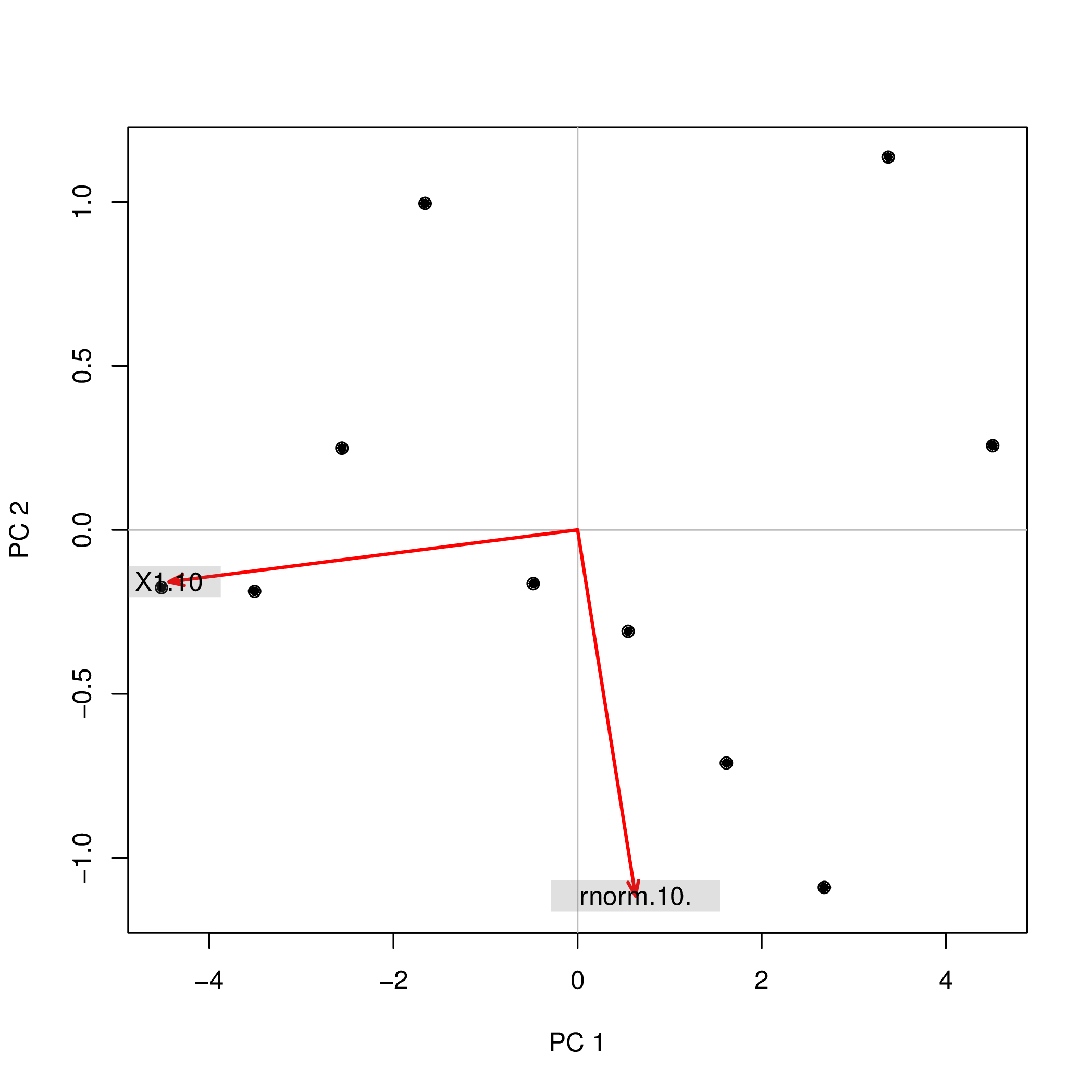 This question gets asked a lot on this forum, so I would like to supplement @January's excellent answer with a bit more general considerations.

In both principal component analysis (PCA) and factor analysis (FA), we use the original variables $x_1, x_2, ... x_d$ to estimate several latent components (or latent variables) $z_1, z_2, ... z_k$. These latent components are given by PCA or FA component scores. Each original variable is a linear combination of these components with some weights: for example the first original variable $x_1$ might be well approximated by twice $z_1$ plus three times $z_2$, so that $x_1 \approx 2z_1 + 3z_2$. If the scores are standardized, then these weights ($2$ and $3$) are known as loadings. So, informally, one can say that $$\mathrm{Original\: variables} \approx \mathrm{Scores} \cdot \mathrm{Loadings}.$$

From here we can see that if we take one latent component, e.g. $z_1$, and flip the sign of its scores and of its loadings, then this will have no influence on the outcome (or interpretation), because $$-1\cdot -1 = 1.$$

This was well answered above. Just to provide some further mathematical relevance, the directions that the principal components act correspond to the eigenvectors of the system. If you are getting a positive or negative PC it just means that you are projecting on an eigenvector that is pointing in one direction or $180^\circ$ away in the other direction. Regardless, the interpretation remains the same! It should also be added that the lengths of your principal components are simply the eigenvalues.

It is easy to see that the sign of scores does not matter when using PCA for classification or clustering. But it seems to matter for regression. Consider a case where you have just one principal component or one common factor underlying several variables. Then lm(y ~ PC1) will give you different predictions of y compared to lm(y ~ -PC1). If y and PC1 have a positive linear relationship, y and -PC1 have a negative linear relationship. Maybe for regression, you should consider other alternatives discussed here, for example lasso regression.

Not the answer you're looking for? Browse other questions tagged r pca factor-analysis faq or ask your own question.

16
How to interpret PCA loadings?
12
What is the difference between "loadings" and "correlation loadings" in PCA and PLS?
3
How to interpret the loadings of the *second* principal component?
5
factor loadings = eigenvectors in R output?