In left skewed data, what is the relationship between mean and median?

I think the median $\leq$ mean.

Is this the case?

It's a nontrivial question (surely not as trivial as the people asking the question appear to think).

The difficulty is ultimately caused by the fact that we don't really know what we mean by 'skewness' - a lot of the time it's kind of obvious, but sometimes it really isn't. Given the difficulty in pinning down what we mean by 'location' and 'spread' in nontrivial cases (for example, the mean isn't always what we mean when we talk about location), it should be no great surprise that a more subtle concept like skewness is at least as slippery. So this leads us to try various algebraic definitions of what we mean, and they don't always agree with each other.

The sample versions of these statistics work similarly.

The reason for the necessary relationship between mean and median in this case is because that's how the skewness measure is defined.

Here's a left-skewed density (by both the second Pearson measure and the more common measure in (2) below): 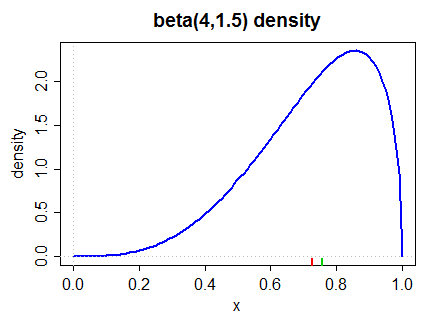 The median is marked in the lower margin in green, the mean in red.

So I expect the answer they want you to give is that the mean is less than the median. It's usually the case with the sorts of distributions we tend to give names to.

(But read on, and see why that's not actually correct as a general statement.)

That is, it's possible to construct examples where the opposite is true, or where one skewness measure is zero while the other is non-zero.

Which is to say, there's no necessary relationship between the locations of the mean, median and the moment-skewness.

Consider, for example, the following sample (the same example can be constructed as a discrete probability distribution):

The mean is larger than the median, yet the third-moment skewness coefficient is negative (i.e. by its lights, we have left-skew data) since the sum of the cubes of the deviations from the mean is negative.

If you use the first Pearson skewness instead of either of the above definitions, you have a similar issue to this case - the direction of the skewness does not pin down the relation between mean and median in general.

Edit: in answer to a question in comments -- an example where the mean and median are equal, but the moment-skewness is negative. Consider the following data (as before, it also counts as an example for a discrete population; consider writing the numbers on the faces of a die).

the mean and the median are both 6, but the sum of cubes of deviations from the mean are negative, so the third moment skewness is negative.

No. Left skewed data has a long tail on the left (low end) so the mean will usually be less than the median. (But see @Glen_b 's answer for an exception). Casually, I think data that "looks" left skewed will have mean less than median.

Right skewed data is more common; for instance, income. There the mean is greater than the median.

Not the answer you're looking for? Browse other questions tagged distributions self-study mean skewness median or ask your own question.

23
Does mean = median imply that a unimodal distribution is symmetric?
20
How to assess skewness from a boxplot?
20
Should we teach kurtosis in an applied statistics course? If so, how?
9
Proof / derivation of skewness and kurtosis formulas
10
Taming of the skew... Why are there so many skew functions?
8
When does Least Square Regression (LSQ) line equal to Least Absolute Deviation (LAD) line?
8
What is skewness of a distribution?
2
What can be inferred when multivariable ordinary least squares and quantile (median) regression yield differing results?
2
Evaluation of a group of histograms

7
When does the amount of skew or prevalence of outliers make the median preferable to the mean?
7
Why is the arithmetic mean > median on a histogram skewed to the right?
11
Mean$\pm$SD or Median$\pm$MAD to summarise a highly skewed variable?
8
Median + MAD for skewed data
21
Should the mean be used when data are skewed?
4
Why is the CI in the median larger then the CI in the mean?
4
Does it ever make sense to average the median, mean, and mode?
2
Why don't we automatically have outliers when mean and median differ strongly?