Prior Gamma distribution: Select appropriate alpha given beta and median

I am trying to programatically select a prior distribution from the Gamma family of distributions. The primary criteria that I need to satisfy is that the median of the distribution should be a given value $X$ (i.e. such that it's equally probable to have a parameter value above $X$ or below $X$)

Additionally, because I'm using the distribution as a conjugate prior for a Poisson distribution's lambda, and I know how much relative weight I want to give to the prior relative to the subsequent observations, I think I know what an appropriate $\beta$ parameter is (though I could be wrong on this point, feel free to make comments if I'm thinking about that incorrectly).

So essentially my problem becomes how to select an appropriate $\alpha$ such that the median is $X$. The way I've considered this seems to work well to get a good prior distribution when constraining the mean (or even mode), but technically, I should be constraining the median. Is this possible formulaicly, or would I need to resort to some kind of computational search to find the right value?

Much about your question is unclear, but I can talk about the median in the gamma distribution and you may be able to resolve the problem from that.

The gamma distribution is typically written either in the rate form or the scale form (I'll avoid using $\beta$ here, since your intention isn't clear):

It's sometimes also written in the mean form (especially for GLMs):

The median doesn't have a simple closed form, but for larger $\alpha$, it can be approximated. 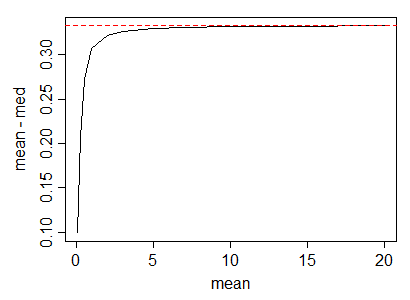 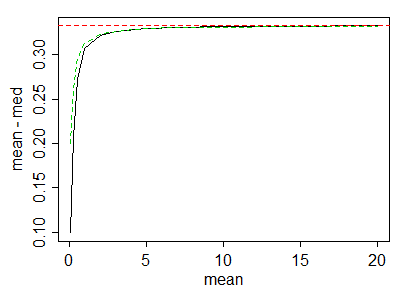 A good starting point would be from one of the previously mentioned approximations.

I think I know what an appropriate β parameter is (though I could be wrong on this point, feel free to make comments if I'm thinking about that incorrectly)

It's a bit hard to comment about whether you have a misconception here if you aren't explicit about what you actually think and why.

Based on testing a large number of possible medians $X$, and the formula I was using to select beta as $\beta = 1/X$, it seems that alpha is constant: $\alpha \approx 1.314250$ . I still don't know the formula for this result, but for my programmatic needs, it's sufficient.

Not the answer you're looking for? Browse other questions tagged prior gamma-distribution median or ask your own question.