What do changes in regression coefficients indicate about correlations among predictors?

How do you tell if there is a strong, weak, or no correlation between two predictors if you are only given the regression coefficients from two models. One model contains one predictor and the other model contains both predictors.

Here's a model with uncorrelated predictors

Here is one with highly correlated predictors

This question can be resolved with a single picture, shown below, which immediately shows the answer is in the negative: you cannot conclude anything about the strength of the correlation between two predictors by comparing the coefficients in two models. The text of this answer explains the picture and the reasoning behind it.

Many questions about relationships among variables in multiple regression (using ordinary or generalized least squares) end up being matters of plane Euclidean geometry. The reasons for this are

Due to the recursion afforded by (3), almost anything we would like to learn about multiple regression can be discovered by considering just three vectors $x, y,$ and $z$. Moreover, when all is done, $z$ will have been projected into the plane generated by $\{x,y\}$, so when we are concerned only about the coefficients (and not the residuals), we can ignore the third dimension (determined by the direction of $z$ orthogonal to the $\{x,y\}$ plane).

(One can go further and standardize the vectors $x$ and $y$. This means they can be assumed to have unit length; standardization merely amounts to choosing suitable units of measurement for the underlying coordinates. However, re-standardizing the vectors after each matching step can change the apparent correlations among them, so I forgo that simplification here.)

Consequently, we can analyze and intuitively understand this question using simple planar figures.

In the illustration, the betas are least squares coefficients:

Moreover, the correlation coefficient $\rho$ between the predictors $x$ and $y$ is the cosine of the angle $\theta$ between them. 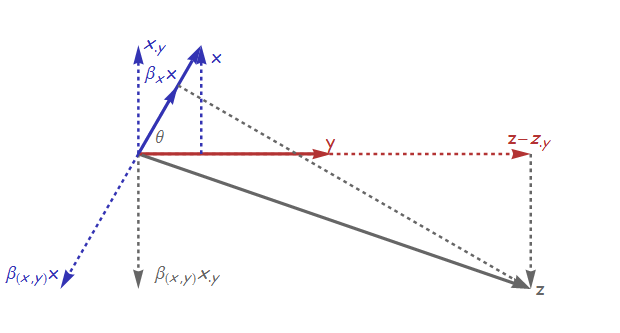 The question, translated into geometry, asks

In the illustration $\beta_x$ is near $2/3$ and $\beta_{(x,y)}$ is about $-3/2$, while $\theta$ is fairly small, corresponding to small positive correlation. This already shows that large changes in the coefficients of $x$ can occur even when $x$ and $y$ are not strongly correlated.

Therefore, the only conclusion that can be supported is that if the coefficient of $x$ changes in the two regressions, then $x$ and $y$ must be correlated. (The textbooks usually state the contrpositive: when $x$ and $y$ are not correlated, adding $y$ to the model will not change the coefficient of $x$.) However, the degree of correlation can be any nonzero value between $-1$ and $1$ inclusive, so we cannot draw any conclusion about the strength of the correlation.

Not the answer you're looking for? Browse other questions tagged regression correlation regression-coefficients or ask your own question.

17
Question on how to normalize regression coefficient
5
Why do my (coefficients, standard errors & CIs, p-values & significance) change when I add a term to my regression model?