Pitfalls to avoid when transforming data?

I achieved a strong linear relationship between my $X$ and $Y$ variable after doubly transforming the response. The model was $Y\sim X$ but I transformed it to $\sqrt{\frac{Y}{X}}\sim \sqrt{X}$ improving $R^2$ from .19 to .76.

Clearly I did some decent surgery on this relationship. Can anyone discuss the pitfalls of doing this, such as dangers of excessive transformations or possible violations of statistical principles?

You can't really compare $R^2$ before and after, because the underlying variability in $Y$ is different. So you literally can take no comfort whatever from the change in $R^2$. That tells you nothing of value in comparing the two models.

If you're just trying different relationships in the hope of finding a transformation with a high $R^2$ -- or any other measure of 'good fit' -- the properties of any inference you might like to conduct will be impacted by the existence of that search process.

To avoid this kind of overfitting, you need, if possible, to do the model-identification and estimation on different subsets of the data (and model evaluation on a third). If you repeat this kind of procedure on many "splits" of the data taken at random, you get a better sense of how reproducible your results are.

There are many posts here with relevant points on these issues: it might be worth trying some searches.

(If you have good a priori reasons for choosing a particular transformation, that's a different issue. But searching the space of transformations to find something that fits carries all manner of 'data snooping' type problems with it.)

There's a bigger problem than the ones identified by @Glen_b .

You have $X$ on both sides of the equation.

There are two elements to @Peter's example, which it might be useful to disentangle:

, where $w_i=\sqrt{\frac{y_i}{x_i}}$ & $z_i=\sqrt{x_i}$, can't both be true. If you re-express each in terms of the other's response they become non-linear in the parameters, with heteroskedastic errors.

(2) Transformation of the response. If you knew $Y$ & $X$ to be independent Gaussian random variables, why should the relation between $W$ & $Z$ still surprise you, or would you call it spurious? The conditional expectation of $W$ can be approximated with the delta method:

It is indeed a function of $z$.

Following through the example ... 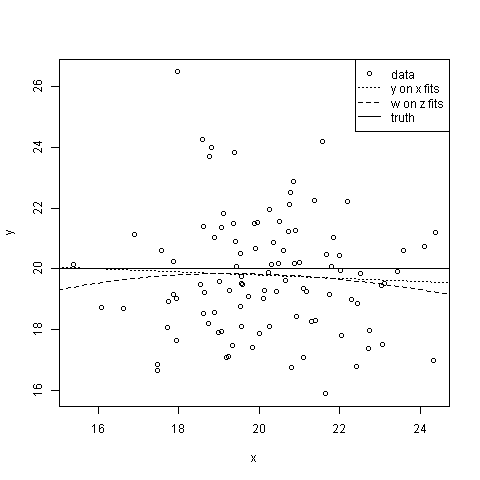 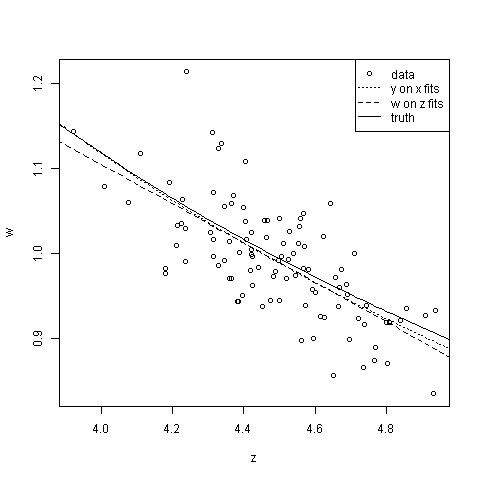 Neither Model 1 nor Model 2 is much use for predicting $y$ from $x$, but both are all right for predicting $w$ from $z$: mis-specification hasn't done much harm here (which isn't to say it never will—when it does, it ought to be apparent from the model diagnostics). Model-2-ers will run into trouble sooner as they extrapolate further away from the data—par for the course, if your model's wrong. Some will gain pleasure from contemplation of the little stars they get to put next to their p-values, while some Model-1-ers will bitterly grudge them this—the sum total of human happiness stays about the same. And of course, Model-2-ers, looking at the plot of $w$ against $z$, might be tempted to think that intervening to increase $z$ will reduce $w$—we can only hope & pray they don't succumb to a temptation we've all been incessantly warned against; that of confusing correlation with causation.

Aldrich (2005), "Correlations Genuine and Spurious in Pearson and Yule", Statistical Science, 10, 4 provides an interesting historical perspective on these issues.

The earlier answer of @Glen_b is all important. Playing with transformations distorts every part of statistical inference and results in $R^2$ that is biased high. In short, not having a parameter in the model for everything you don't know will give a false sense of precision. That's why regression splines are now so popular.

Not the answer you're looking for? Browse other questions tagged regression data-transformation r-squared or ask your own question.

2
Understanding the transformation on response variable
2
Should the same scaling strategy be applied to both the target class and explanatory features?