ABC. How can it avoid the likelihood function?

According to the Wikipedia article, we have the scenario shown below, but how can ABC generate simulation datasets from samples of $\theta$ without knowing or evaluating the likelihood function?

For example, how would this method work for a normal $N(\mu, \sigma)$ distribution? Assuming that the parameter to estimate is $\mu$ and that $\sigma$ is known, how would it generate the simulations without evaluating $N(\mu, \sigma)$? 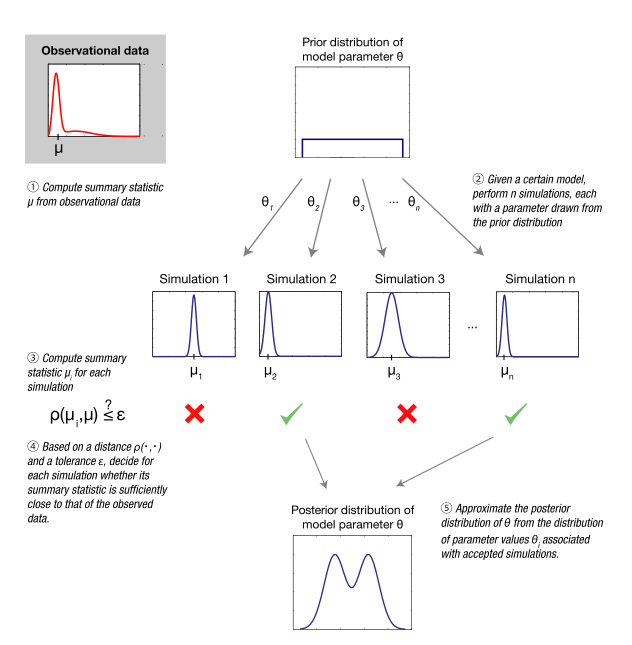 In your example, one would draw values for $\mu$ from the prior distribution $p(\theta)$, and simulate a sample $\tilde D$ from an $N(\mu, \sigma)$ distribution. We can use a quantile-transformation $\Phi^{-1}(u)$ of a uniform distributed random number $u$ here. This requires that we know the quantile-function $\Phi^{-1}$ of $N(\mu, \sigma)$, but not the likelihood function $P[D|\theta]$. Alternative, we could even do a real world experiment which is known to produce $N(\mu,\sigma)$ disturbed measurements.

The idea of ABC now is, that if $\tilde D$ is identical to the real data $D$, then $\theta$ also is a sample from the posterior distribution $p(\theta|D)$. If we get enough of such samples, we can use the then to approximate the posterior distribution itself. As we normally would hardly ever observe a simulation with produces exactly $D$, we allow for a small mismatch $\epsilon$ between $D$ and $\tilde D$, which introduces another approximation.

Not the answer you're looking for? Browse other questions tagged bayesian abc or ask your own question.

7
How is ABC more computationally efficient than exact Bayesian Computation for parameter estimation in dynamical systems (ODE) models?
15
How do ABC and MCMC differ in their applications?
2
Distance metric for Approximate Bayesian Computation (ABC) regression
5
Bayesian MCMC when a likelihood function cannot be written
2
Infer parameters with ABC with non-uniform prior
2
ABC with non-uniform prior
22
Is there any difference between Frequentist and Bayesian on the definition of Likelihood?