I am looking at problem 5.01 relating to Galton's data on adult heights of fathers and sons, from Chapter 5 of Statistical Modelling: A Fresh Approach

link to this book: http://www.mosaic-web.org/go/StatisticalModeling/index.html

Can anyone explain me why Confidence interval is so different that coverage interval?

Prob 5.01. The mean of the adult children in Galton’s data is

Had Galton selected a different sample of kids, he would likely have gotten a slightly different result. The confidence interval indicates a likely range of possible results around the actual result.

Use bootstrapping to calculate the 95% confidence interval on the mean height of the adult children in Galton’s data. The following statement will generate 500 bootstrapping trials.

(a) What is the 95% confidence Interval on the mean height?

(b) A 95% coverage interval on the individual children’s height can be calculated like this:

Q: Explain why the 95% coverage interval of individual children’s heights is so different from the 95% confidence interval on the mean height of all children?

I'll try to address this in fairly general terms, without restricting the ideas to bootstrapping.

The width of the confidence intervals are affected by the variability (/uncertainty) of the quantities they are intervals for (more variable => wider interval).

Variances have some interesting properties. Two relevant ones are:

When $X$ and $Y$ are independent (or even only uncorrelated), the covariance is zero, leading to:

The two facts lead us to:

So the spread of sample means (as measured by say the standard deviation of the distribution of sample means) tends to get smaller with sample size -- in proportion to $1/\sqrt n$. 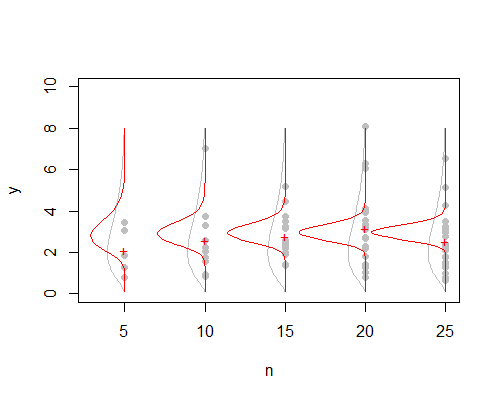 Since sample means are less spread than individual observations, confidence intervals for them will generally be narrower, and as sample sizes become large, will tend to be ever more narrow.

Not the answer you're looking for? Browse other questions tagged self-study confidence-interval coverage-probability or ask your own question.