The case: I am trying to estimate event history models (also known as survival models) with time-varying predictors at two different levels of (geographical) aggregation. More precisely, I am using a discrete time event history model (logit model on stacked data) to predict the odds of outmigration (mig) at the household-level. Each household is exposed to the hazard of migration over a certain period (in this example three years; exposure). I have a number of time-varying (e.g., wx = cumulative working experience of household head) and time invariant household-level predictors (e.g., fem = household head is female) to control for the effect of varies socio-demographic on the decision to migrate. However, the households in my sample are located in different municipalities (MunID). In my research I am interested in how a set of time-varying characteristics of the environment (Env1, e.g. rainfall decline) that operate at the municipality-level impact the odds of household-level outmigration. However, I also need to control for some time-invariant municipality-level characteristics (Env2, e.g., % land used for agricultural production). A simplified example of the data structure is presented in the below table. 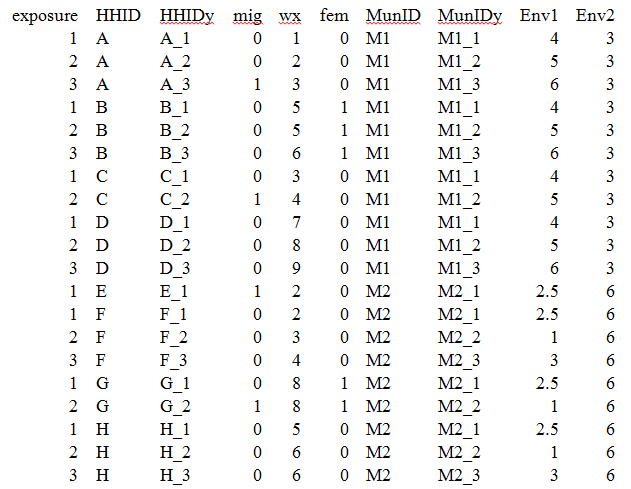 The problem: Because I have two levels of aggregation (households clustered in municipalities), I was intending to use logistic multilevel models. However, I am not quite sure how to correctly specify my levels. I am using R and the lme4 package to estimate the multilevel models.

References: Courgeau, D. (2007). Multilevel synthesis: From the group to the individual. Dordrecht, The Netherlands: Springer.

I think I found a solution. I read two book chapters about multilevel event history models (Courgeau, 2007; Goldstein, 2011), which discuss similar cases and suggest using a three-level structure such as time (level-1) nested within households (level-2), which are in turn nested within municipalities (level-3). Goldstein (2011, p. 221) explicitly states for this structure that “The exploratory variables can be defined at any level. They may also vary over time, allowing so-called time varying covariates.”

So here is a quick explanation why I think that such a three-level model is able to correctly incorporate time-varying predictors at the municipality-level (level-3), such as the environmental variable “Env1”. Because Env1 varies across time, the model automatically treats it as a level-1 variable. It does not know that at each time step (e.g., year 1990), the values for Env1 are the same for all households located in a particular municipality. However, I don’t think that this biases the standard errors for the Env1 variable because I have household random effects (level-2) included in the model, which estimate a separate intercept for each household. Moreover, I also include an additional variance component at level-2 that allows the slope of Env1 to vary randomly across households. In this way the effect of Env1 is uniquely computed for each household.

Courgeau, D. (2007). Multilevel synthesis: From the group to the individual. Dordrecht, The Netherlands: Springer.

Not the answer you're looking for? Browse other questions tagged survival multilevel-analysis random-effects-model time-varying-covariate or ask your own question.