Bayesian analysis of contingency tables: How to describe effect size

I'm working through the examples in Kruschke's Doing Bayesian Data Analysis, specifically the Poisson exponential ANOVA in ch. 22, which he presents as an alternative to frequentist chi-square tests of independence for contingency tables.

I can see how we get information about about interactions that occur more or less frequently than would be expected if the variables were independent (ie. when the HDI excludes zero).

My question is how can I compute or interpret an effect size in this framework? For example, Kruschke writes "the combination of blue eyes with black hair happens less frequently than would be expected if eye color and hair color were independent", but how can we describe the strength of that association? How can I tell which interactions are more extreme than others? If we did a chi-square test of these data we might compute the Cramér's V as a measure of the overall effect size. How do I express effect size in this Bayesian context?

Here's the self-contained example from the book (coded in R), just in case the answer is hidden from me in plain sight ...

Here's the frequentist output, with effect size measures (not in the book):

Here's the Bayesian output, with HDIs and cell probabilities (directly from the book):

And here are plots of the posterior of Poisson exponential model applied to the data: 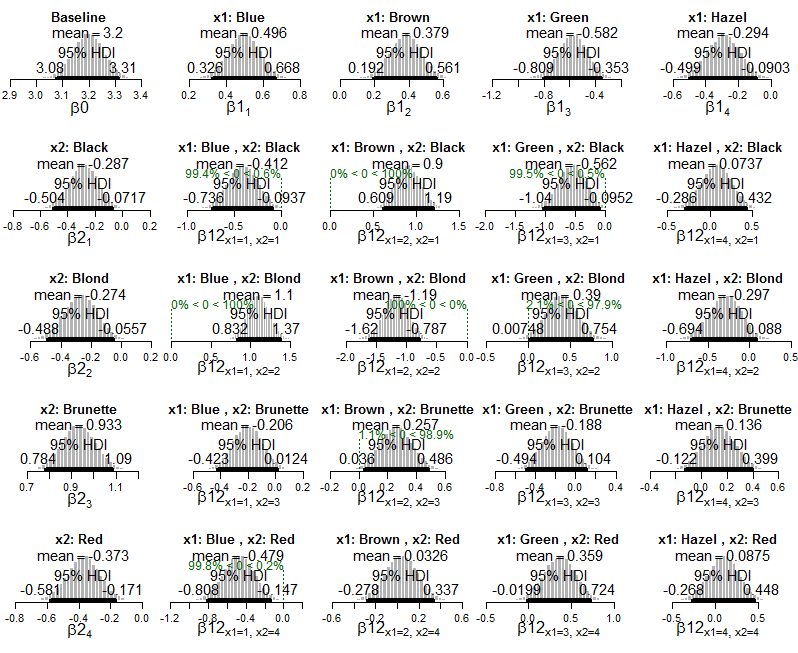 And plots of the posterior distribution on estimated cell probabilities: 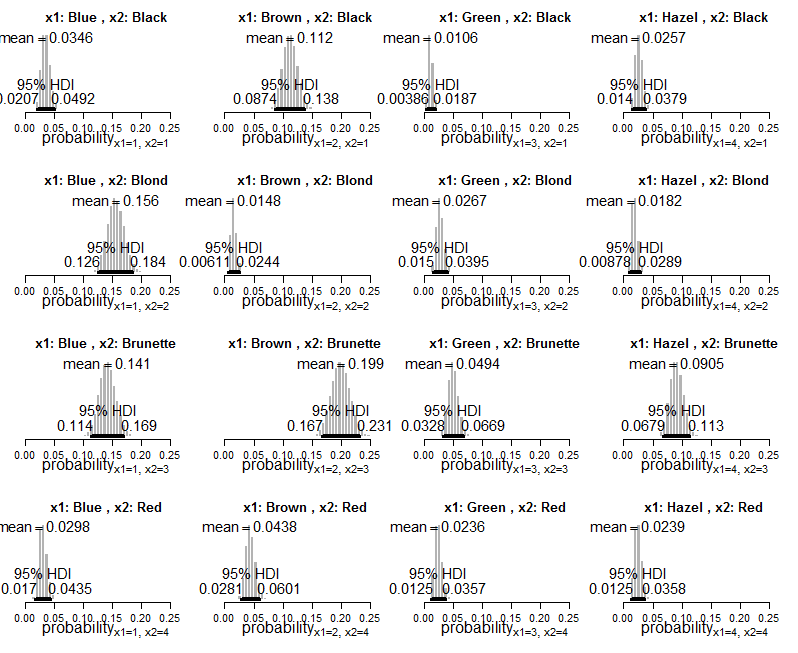 One way to study effect size in ANOVA model is by looking at "super population" and "finite population" standard deviations. You have a two way table, so this is 3 variance components (2 main effects and 1 interaction). This is based on mcmc analysis. You calculate the standard deviation for each effect for each mcmc sample.

Where $ k $ indexes the "row" of the ANOVA table. Simple boxplots of the mcmc samples of $ s_k $ vs $ k $ are quite instructive on effect sizes.

Andrew Gelman advocated this approach. See his 2005 paper "analysis of variance: why it is more important than ever"

Per the index, Kruschke only mentions effect size twice, and both times are in the context of a metric predicted variable. But there's this bit on p. 601:

If the researcher is interested in violations of independence, then interest is on the magnitudes of the $\beta_{rc}$. The model is especially convenient for this purpose, because arbitrary interaction contrasts can be investigated to determine where nonindependence is arising.

Not the answer you're looking for? Browse other questions tagged r bayesian effect-size contingency-tables or ask your own question.