I have 1000 uniformly distributed random numbers. How do I manipulate them to get a V-shaped histogram?

Search for the "transformation method" or "inverse transform method", which is a way to generate random numbers with an arbitrary distribution. You'll find many lecture notes describing the idea. This is the wikipedia page: Inverse transform sampling. It has links to more detailed resources at the bottom.

The basic result is this recipe: If you need some distribution $D$, then

For example, in Mathematica 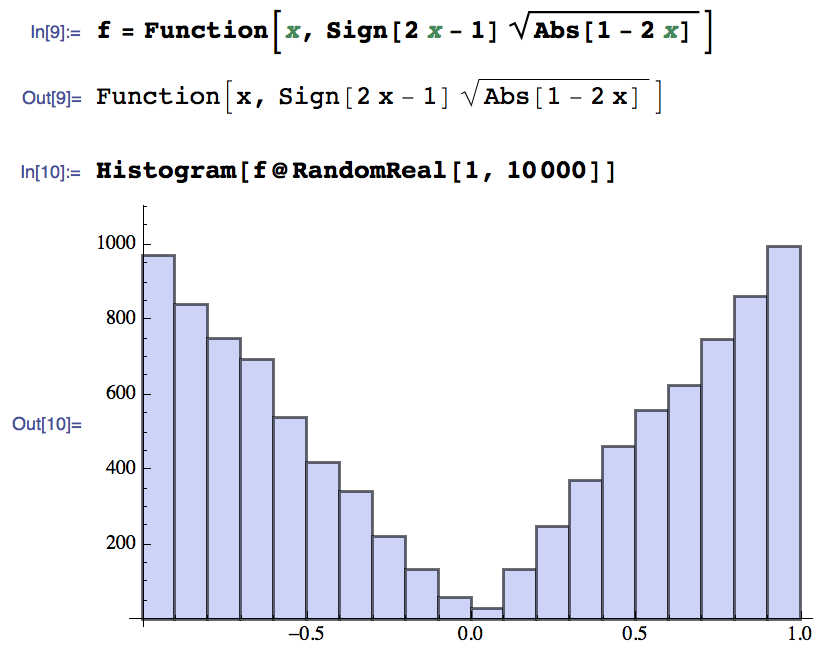 All we need to do to turn this pyramid into a V is to swap the two halves of the distribution.

The random variable $Z$ will then have the V-shaped the distribution you want on $[-1,1]$.

This should really be a comment below the above answer. But since I do not have enough reputation to make this comment I will post it here. In the question you originally asked how to do this in "excel". This should do it,

An interesting note to the previous answer is that it does not change the distribution of the created variable at all if you are using one uniform random variable (the same for both) to generate the V-shaped distribution or two (for the sign function and the abs function).

You do want to use $U\sim \text{Uniform}(0,1)$. You are looking for something called Probability Integral Transform (PIT).

There are a variety of approaches that might be suitable.

Even with the comments you haven't really pinned it down enough (you give an example of what you want, but not what range of cases you want considered), but here are some examples of approaches:

1) rejection sampling. Generate a uniform on the desired range, and use rejection to obtain the desired distribution. This works quite generally, and can be made reasonably efficient even for fairly general cases. Variants of rejection sampling, such as the ziggurat approach, can be very fast, but may be quite fiddly to set up if you only want a few numbers.

There are innumerable other approaches with varying mixes of convenience and speed. For example, the approach in (2) can be used to generate two such variables at a time, and if speed is paramount, the bit required for a random sign may be taken from one of the uniforms used (preferably before normalizing to (0,1), and then bitshifting or a smaller scaling factor used to take what's left to still be uniform); this later approach might be used in (3) for example, or in a modified version of (1).