Advice on sensitivity analysis for priors in Bayesian statistics

I'm not clear on how to perform sensitivity analysis on the priors. Many sites have different answers. One site indicates to perform three non-informative, weakly informative and known priors. Another suggest running the model with different priors.

I want to estimate this parameter A, in which A = mean1 + mean2 . So, the priors for mean1 and mean2 are formulated (in coding) as the following :

With the above formulation, how do I perform the sensitivity analysis?

Your advice will be appreciated and help me get started. Thank you!

Try as I might, I'm unable to find an open source that fully explains that process, so for a fuller treatment than the below, I'm left to direct your to Bayesian Data Analysis. In particular, Ch. 6 should prove very helpful.

In broadest strokes, following the analysis one should ponder whether model inferences make realistic sense. For instance, consider this paper detailing prior considerations in a pharmacological study. In brief, liver size was a variable relevant to the model, about which much is known in medical literature:

A non-informative prior would have suffered a few pitfalls:

If noninformative prior distributions were assigned to all the individual parameters, then the model would ﬁt the data very closely but with scientifically unreasonable parameters – for example, a person with a liver weighing 10 k. This sort of difficulty is what motivates a researcher to specify a prior distribution using external information.

This is a simple test of realism: If your model suggests a human liver the size of a Thanksgiving turkey, there's a flaw of some sort.

While not well-applied to your problem, this example makes clear how much these considerations depend on context. To examine whether the posterior is overly dependent on the prior, one can consider multiple priors and see whether the posterior changes, in a practical sense, as different priors will necessarily always yield different posteriors. For example, say you're polling a constituency about support for a proposed law. In particular, no one has ever gathered data about this population's support for this law: Your data exist in a knowledge vacuum.

You construct a model in which each person you randomly poll is a Bernoulli random variable with parameter $\theta \le 1$. You select the beta distribution as a convenience prior for $\theta$, because it's conjugate to the Bernoulli. You've polled 98 randomly selected persons, 45 of which support the measure. But you wonder whether the Jeffrey's prior, $B(\frac{1}{2}, \frac{1}{2})$ or a uniform density over $[0,1]$, given by $B(1,1)$. Leaving the formal math aside, the respective posteriors are $B(45.5, 53.5)$ and $B(46, 54)$, and it's difficult to see this difference could be of practical consequence: 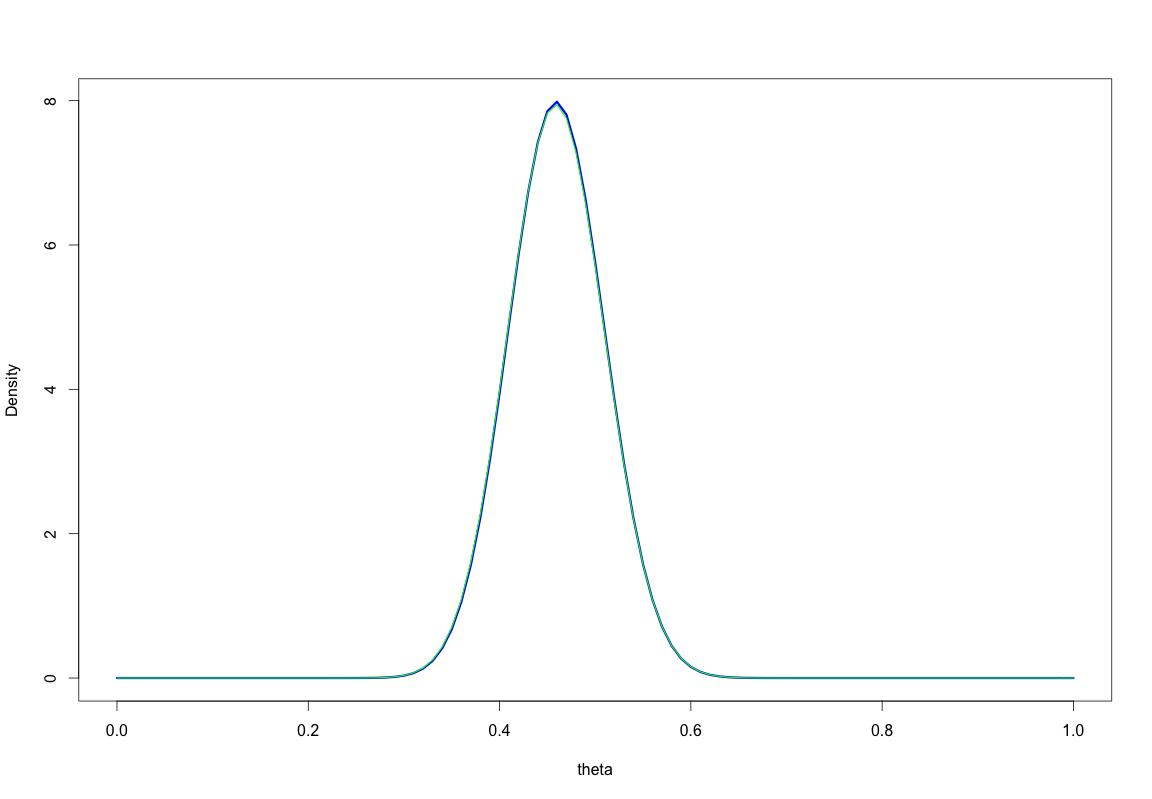 (Note that the blue and green lines are nearly indistinguishable.) Now, you can imagine that if one had previous, extensive polling data on this proposal, then perhaps this data could signal an change in opinion, a status quo result, or random noise. In that case, one would be wise to compare these inferences with ones derived from more informed priors.

Now, to your specific questions above:

Not the answer you're looking for? Browse other questions tagged bayesian markov-chain-montecarlo computational-statistics pymc or ask your own question.