Why are all known distributions unimodal?

I do not know any multimodal distributions.

Why are all known distributions unimodal? Is there any "famous" distribution that have more than one mode?

Of course, mixtures of distributions are often multimodal, but I would like to know whether there exist any "non-mixture" distributions that have more than one mode.

All discrete distributions are clearly mixtures (of atoms, which are unimodal).

I will show that most continuous distributions are also mixtures of unimodal distributions. The intuition behind this is simple: we can "sand off" bumps from a bumpy graph of a PDF, one by one, until the graph is horizontal. The bumps become the mixture components, each of which is obviously unimodal.

Consider continuous distributions $F$ whose PDFs $f$ are continuous (these are the "absolutely continuous" distributions). (Continuity is not much of a limitation; it can be further relaxed by more careful analysis, assuming merely that the points of discontinuity are discrete.)

To cope with "plateaus" of constant values that might occur, define a "mode" to be an interval $m = [x_l, x_u]$ (which might be a single point where $x_l=x_u$) such that 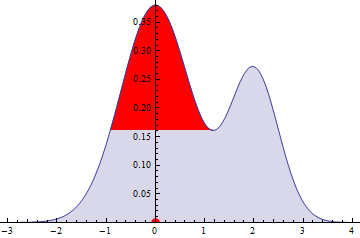 In this illustration of a multimodal PDF, a mode $m=[0,0]$ is identified by a red dot on the horizontal axis. The horizontal extent of the red portion of the fill is the interval $m^\prime$: it is the base of the hump determined by the mode $m$. The base of that hump is at height $y\approx 0.16$. The original PDF is the sum of the red fill and the blue fill. Notice that the blue fill only has one mode near $2$; the original mode at $[0,0]$ has been removed.

when $x \in m^\prime$ and $f_m(x)=0$ otherwise. (This makes $f_m$ a continuous function, incidentally.) The numerator is the amount by which $f$ rises above $y$ and the denominator $p_m$ is the area between the graph of $f$ and $y$. Thus $f_m$ is non-negative and has total area $1$: it is the PDF of a probability distribution. By construction it has a unique mode $m$.

Also by construction, the function

is a PDF provided $p_m\lt 1$. (Obviously if $p_m=1$ there is nothing left of $f,$ which must have been unimodal to begin with.) Moreover, it has no modes in the interval $m^\prime$ (where it is constant, which is why the previous careful definition of a mode as an interval was necessary). Furthermore,

Iterate this procedure with $f_m^\prime$ (which as a linear combination of continuous functions is still a continuous function, enabling us to proceed as before), producing a sequence of modes $m=m_1, m_2, \ldots$; corresponding sequences of weights $p_1=p_m, p_2=p_{m_2}, \ldots$; and PDFs $f_1=f_m, f_2=f_{m_2}, \ldots.$ The limiting result exists because (a) the interval where $f_i$ is flattened includes a proper interval that had not been flattened in the preceding $i-1$ operations and (b) the real numbers cannot be decomposed into more than a countable number of such intervals. The limit cannot have any modes and therefore is constant, which must be zero (for otherwise its integral would diverge). Consequently, $f$ has been expressed (perhaps not uniquely, because the order in which modes were selected will matter) as a mixture

By unimodal, I think the OP plainly means that there is just one interior mode (i.e. excluding corner solutions). The question is thus really asking ... $$\text{why is it that brand name distributions do NOT have more than one interior mode?}$$

i.e. why do most brand name distributions look something like this: 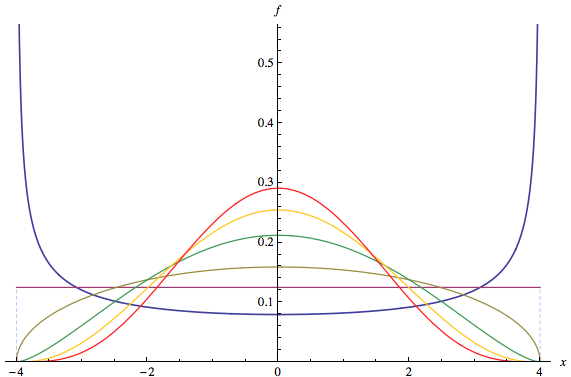 ... plus or minus some skewness or some discontinuities? When the question is posed thus, the Beta distribution would not be a valid counter example.

It appears the OP's conjecture has some validity: most common brand name distributions do not allow for more than one interior mode. There may be theoretical reasons for this. For example, any distribution that is a member of the Pearson family (which includes the Beta) will necessarily be (interior) unimodal, as a consequence of the parent differential eqn that defines the entire family. And the Pearson family nests most of the best-known brand names.

One brand-name counter-example is the $\text{Sinc}^2$ distribution with pdf: 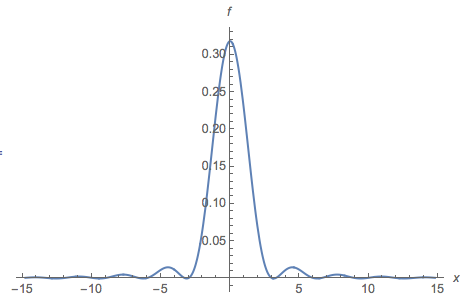 We could also perhaps add the family of cardiod and distributions related to this class ... with pdf plots such as: 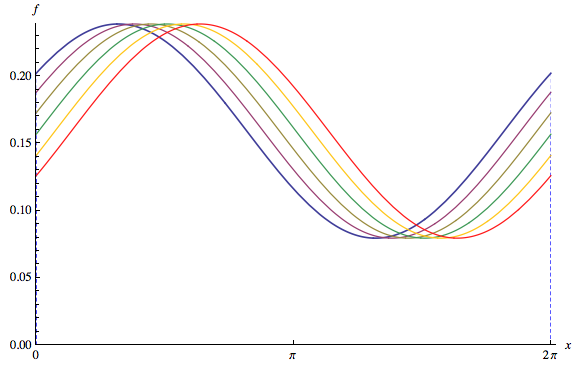 The family of reflected brand name distributions would also perhaps be possible brand name contenders (though, these might be thought of as a 'cheat solution' ... but they are still brand names) such as the Reflected Weibull shown here: 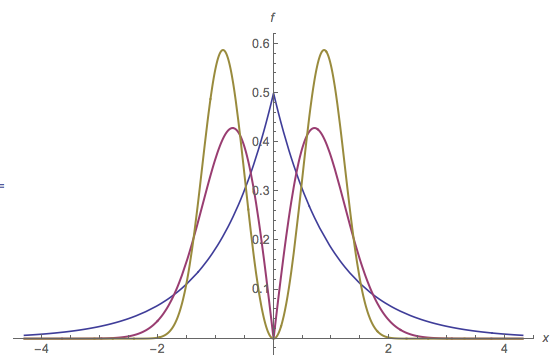 That you mightn't think of any doesn't mean there aren't any.

I can name "known" distributions that aren't unimodal.

(This isn't a special case of the beta distribution, in spite of the comment that says it is. The two families have some overlap, however.)

Mixture distributions are certainly known, and many of those are multimodal.

where $\varphi$ is the PDF of a standard Gaussian. 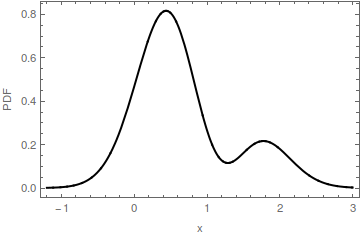 Not the answer you're looking for? Browse other questions tagged distributions mode or ask your own question.

1
Bimodal univariate distributions are always indicative of a mixture of two random variables. Is this correct?