I'm trying to get a handle on the concept of overdispersion in logistic regression. I've read that overdispersion is when observed variance of a response variable is greater than would be expected from the binomial distribution.

But if a binomial variable can only have two values (1/0), how can it have a mean and variance?

Can anyone provide an intuitive overview of:

A binomial random variable with $N$ trials and probability of success $p$ can take more than two values. The binomial random variable represents the number of successes in those $N$ trials, and can in fact take $N+1$ different values ($0,1,2,3,...,N$). So if the variance of that distribution is greater than too be expected under the binomial assumptions (perhaps there are excess zeros for instance), that is a case of overdispersion.

In the context of a logistic regression curve, you can consider a "small slice", or grouping, through a narrow range of predictor value to be a realization of a binomial experiment (maybe we have 10 points in the slice with a certain number of successes and failures). Even though we do not truly have multiple trials at each predictor value and we are looking at proportions instead of raw counts, we would still expect the proportion of each of these "slices" to be close to the curve. If these "slices" have a tendency to be far away from the curve, there is too much variability in the distribution. So by grouping the observations, you create realizations of binomial random variables rather than looking at the 0/1 data individually.

The Example below is from another question on this site. Lets say the blue lines represents the expected proportion over the range of predictor variables. The blue cells indicate observed instances (in this case schools). This provides a graphical representation of how overdispersion may look. Note that there are flaws with interpreting the cells of the graph below, but it provides an idea of how overdispersion can manifest itself. 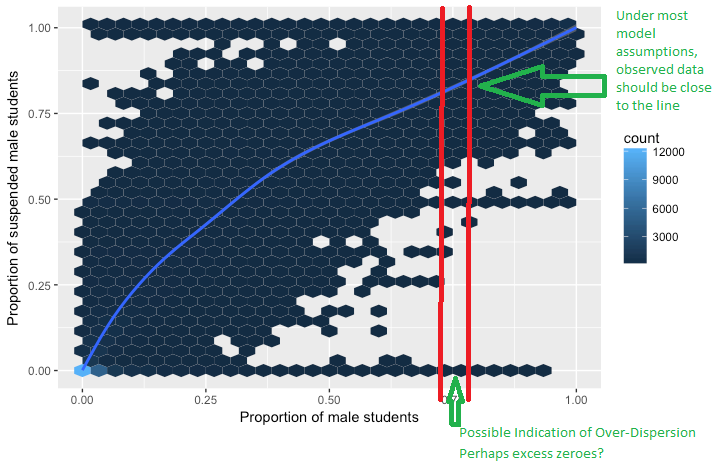 As already noted by others, overdispersion doesn't apply in the case of a Bernoulli (0/1) variable, since in that case, the mean necessarily determines the variance. In the context of logistic regression, this means that if your outcome is binary, you can't estimate a dispersion parameter. (N.B. This does not mean that you can ignore potential correlation between observations just because your outcome is binary!)

If, on the other hand, your outcome is a set of proportions, then you can estimate a dispersion parameter (which, although often greater than one, can also be less than one) by dividing the Pearson chi-squared statistic (or the deviance) by the residual degrees of freedom.

Not the answer you're looking for? Browse other questions tagged logistic variance binomial-distribution mean overdispersion or ask your own question.

4
Binomial vs. quasi-binomial model
5
How to check overdispersion of binomial GLMMs, lme4 package
5
How to handle underdispersion in GLMM (binomial outcome variable)
3
Validation of Bayesian Hypothesis for AB test
3
GLM weights vs. identical observations
1
Analysing overdispersed data with generalised linear models
1
How to correctly account for country effects in logistic regression?
0
GLM: binomial(logit) with weights=tested
1
What is the correct way to identify overdispersion?