Probability that the square of a random integer ends in 1

From my intro to probability theory book: What is the probability that a randomly selected positive integer will give a number ending in 1 if it is squared? Hint: It is enough to consider the 1 digit numbers. Answer: 0.2

I do not understand why we only need to consider one digit numbers. I see that 1 & 9 are the one digit numbers that produces a square ending in 1, giving a probability of 2/10 of randomly selecting them, but how can we generalize this to all positive integers?

In fact that answer is not sufficiently justified given the information in the question.

It depends on the distribution over the positive integers. The question says "randomly chosen", and the burning question is "what the heck does that mean"?

* (if they think it's possible, they're welcome to attempt to explain how one actually does that, which might be fun to watch)

Even the Hint doesn't pin it down.

Let's consider the 1-digit integers, and the last digit of their squares:

For example, if we toss a coin until we observe a head, and count the number of tosses, that will give a distribution over the integers. With that distribution, the chance is a little over 0.5:

Other answers are possible.

When a mathematician asks to pick a "random integer" or "random natural number," they usually have in mind a limiting process in which the numbers all "become equally probable." The process can be quite general: I believe all that you need is that (a) the relative probabilities of any two sets should converge and (b) the relative probabilities of any two finite sets should converge to the ratio of their cardinalities.

One nice set of distributions with these properties is the geometric, where the chance of $k\ge 1$ is given by 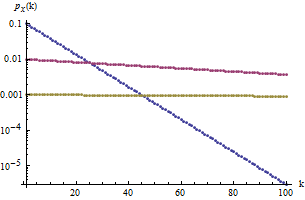 The advantage of this particular family of probability measures is that the probability of any set $A$ of positive integers, such as those whose squares end in "1", is the limiting value of

as $x\to 1.$ This limiting value, which appears to be the product of something going to $0$ (that is, $1-x$) and something that is growing infinitely large (the unnormalized chance of $A$ as given by the sum), often can easily be computed using L'Hopital's Rule. Let's illustrate with the question in hand, where

Because $A_1$ and $A_9$ are disjoint, this breaks the probability calculation into two parts:

Both of these sums are geometric series with common ratios $x^{10},$ which reduces them to

Clearly we did not just "consider only one-digit numbers" in the calculation--all the positive integers were involved--but because $A_1$ and $A_9$ are defined only in terms of the final digits ($1$ and $9$ respectively), in that sense we only have to be concerned about the final digits (in this particular problem).