I have a random sample of the following data on JMP. How do I find if there is an association between gender and favorite movie genre? I've been looking through different formulas and can't find anything that will work. Any help will be appreciated. 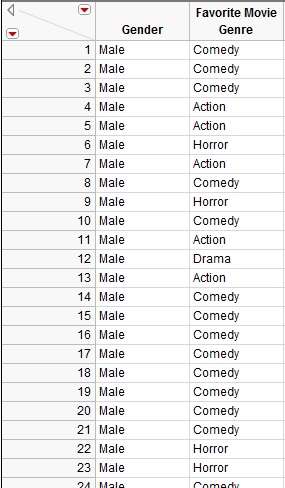 To get a better overview over your data, you should first build a two-way contingency table. I believe this is called "Contingency Analysis" in JMP. You will get a $2 \times k$ frequency table with two rows (say) for men and women and a column for each genre. You can then look at the row frequencies to compare the distributions by gender.

To visualize the differences, one sometimes uses a mosaic plot, or you could just use (stacked) bar plots (stacking relative frequencies for the categories separately for the two genders).

To test whether the frequencies differ significantly among men and women, you could use a number of statistical tests, the most famous one being Pearson's Chi squared test (implemented in JMP as well as far as I see). Its validity depends on the distributions being "not too extreme", see http://en.wikipedia.org/wiki/Pearson%27s_chi-squared_test#Assumptions for example. If these conditions should not be fulfilled, there are alternatives such as Fisher's exact test.

Not the answer you're looking for? Browse other questions tagged correlation categorical-data jmp or ask your own question.

5
R and JMP produce different regression results due to sum of squares calculation and other factors
3
How to calculate confidence intervals in a GLM using the profile likelihood?
2
How to correlate categorical personality and music genre preference scores?
4
association measure and statistical test for binary and ordinal variables in large datasets
0
Confused about type of analysis between categorical variable (degree of severity of accident) and continuous variable (number of car passengers)
0
Association between gene expression levels and clinical symptoms?
0
Is it possible to model with a linear regression the relationship between a dependent continuous variable and an independent categorical variable?