What is the meaning of an F value less than 1 in one-way ANOVA?

What does it mean if the F value in one-way ANOVA is less than 1?

However, the point is that both the numerator and denominator are random variables, and so is the F ratio. The F ratio is drawn from a distribution. If we assume the null hypothesis is true we get one distribution, and if we assume that it is false with various assumptions about effect size, sample size, and so forth we get another distribution. We then do a study and get an F value. When the null hypothesis is false, it is still possible to get an F ratio less than one. The larger the population effect size is (in combination with sample size), the more the F distribution will move to the right, and the less likely we will be to get a value less than one. 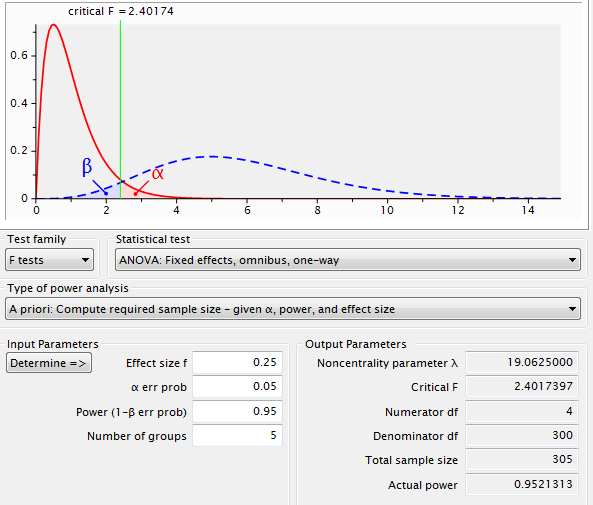 Note that while values of the F statistic less than 1 can occur by chance when the null hypothesis is true (or near true) as others have explained, values close to 0 can indicate violations of the assumptions that ANOVA depends on. Some analysts will look at the area to the left of the statistic in the F-distribution as a p-value checking assumption violations. Some of the violations that lead to small F-stats include unequal variances, improper randomization, lack of independence, or just faking the data.

The issue here is that hypothesis testing involves a null AND an alternative hypotheis, and therefore; the rejection region is determined by both hypotheses.

Consider a simpler example. If you are investigating a process that possibly has a MEAN of zero, but could not have a mean of less than zero, then you might be interested in performing the following test

at a level alpha. Your rejection region of the null hypothesis is on the right of zero. It is not impossible for you to get a sample mean that is negative, albeit with a small probability. If you were to get a negative sample mean in your experiment, you would not question the veracity of the experiment.

Now consider your question. The reason that the rejection region for the F-statistic is on the right is because of the alternative hypothesis in the one-way ANOVA. You are testing the hypothesis that

After looking in a folder I haven't looked for years (like real folder and not computer folder) I found this paper which may be of interest for this question:

Standard statistics texts indicate that the expected value of the $F$ ratio is $1.0$ (more precisely: $N/(N-2)$) in a completely balanced fixed-effects ANOVA, when the null hypothesis is true. Even though some authors suggest that the null hypothesis is rarely true in practice (e.g., Meehl, 1990), $F$ ratios $< 1.0$ are reported quite frequently in the literature. However, standard effect size statistics (e.g., Cohen's $f$) often yield positive values when $F < 1.0$, which appears to create confusion about the meaningfulness of effect size statistics when the null hypothesis may be true. Given the repeated emphasis on reporting effect sizes, it is shown that in the face of $F < 1.0$ it is misleading to only report sample effect size estimates as often recommended. Causes of $F$ ratios $< 1.0$ are reviewed, illustrated by a short simulation study. The calculation and interpretation of corrected and uncorrected effect size statistics under these conditions are discussed. Computing adjusted measures of association strength and incorporating effect size confidence intervals are helpful in an effort to reduce confusion surrounding results when sample sizes are small. Detailed recommendations are directed to authors, journal editors, and reviewers.

A student asked me a similar question today. The short answer is that F is < 1 when there is more variance within groups than between.

The following is an example of this:

There is little difference between the group means:

But the differences within the groups compared to the group means are relatively large. Most scores are roughly 25 points different from the mean:

This scenario leads to a large amount of variance within groups (600.55) and little variance between (0.33).

Not the answer you're looking for? Browse other questions tagged anova experiment-design or ask your own question.