Can a narrow confidence interval around a non-significant effect provide evidence for the null?

It is obviously fallacious to assume that failure to reject the null implies that the null is true. But in a case where the null is not rejected and the corresponding confidence interval (CI) is narrow and centered around 0, does this not provide evidence for the null?

I am of two minds: Yes, in practice this would provide evidence that the effect is more or less 0. However, in a strict hypothesis-testing framework, it seems that null effects are simply unusable for inference, as are their corresponding CIs. So what is the meaning of a CI when its point estimate is non-significant? Is it also unusable for inference or can it be used as in the preceding example to quantify evidence for the null?

Answers with scholarly references are encouraged.

As Andy W wrote, concluding that the parameter equals a specified value (in your case, effect size equals zero), is a matter of equivalence testing.

Please see Stefan Wellek's "Testing Statistical Hypotheses of Equivalence and Noninferiority" for further reading, the most comprehensive book on this matter.

Null hypotheses exemplify the meaning of "All models are wrong, but some are useful." They're probably most useful if not taken literally and out of context – that is, it's important to remember the epistemic purpose of the null. If it can be falsified, which is the intended objective, then the alternative becomes more useful by comparison, albeit still rather uninformative. If you reject the null, you're saying the effect is probably not zero (or whatever – null hypotheses can specify other values for falsification too)...so what is it then?

The effect size you calculate is your best point estimate of the population parameter. Generally, chances should be equally good that it's an overestimate or underestimate, but the chances that it's a dead-center bulls-eye are infinitesimal, as @Glen_b's comment implies. If by some bizarre twist of fate (or by construction – either way, I assume we're speaking hypothetically?) your estimate falls directly on $0.\bar 0$, this is still not much evidence that the parameter is not a different value within the confidence interval. The meaning of the confidence interval does not change based on the significance of any hypothesis test, except in as much as it may change location and width in a related way.

In case you're not familiar with what effect size estimates look like for samples from a (simulated) population of which the null hypothesis is literally true (or in case you haven't seen it yet and are just here for a little statistical entertainment), check out Geoff Cumming's Dance of the $p$ Values. In case those confidence intervals aren't narrow enough for your taste, I've tried simulating some of my own in R using randomly generated samples just shy of $n=1\rm M$ each from $\mathcal N(0,1)$. I forgot to set a seed, but set x=c() and then ran x=append(x,replicate(500,cor(rnorm(999999),rnorm(999999)))) as many times as I cared to before finishing this answer, which gave me 6000 samples in the end. Here's a histogram and a density plot using hist(x,n=length(x)/100) and plot(density(x)), respectively: 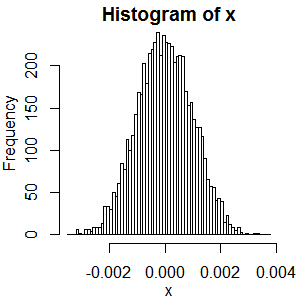 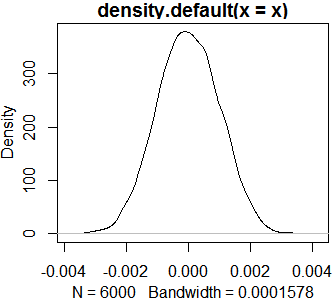 As one would expect, there's evidence for a variety of nonzero effects arising from these random samples of a population with literally zero effect, and these estimates are distributed more or less normally around the true parameter (skew(x)= -.005, kurtosis(x)= 2.85). Imagine you only knew the value of your estimate from a sample of $n=1\rm M$, not the true parameter: why would you expect the parameter to be closer to zero than your estimate instead of further? Your confidence interval might include the null, but the null isn't really any more plausible than the value of equivalent distance from your sample effect size in the opposite direction, and other values may be more plausible than that, especially your point estimate!

If, in practice, you want to demonstrate that an effect is more or less zero, you need to define how much more or less you're inclined to ignore. With these huge samples I've simulated, the estimate of largest magnitude I generated was $|r|=.004$. With more realistic samples of $n=999$, the largest I find among $1\rm M$ samples is $|r|=.14$. Again, the residuals are normally distributed, so these are unlikely, but the point is they're not implausible.

Not the answer you're looking for? Browse other questions tagged hypothesis-testing statistical-significance confidence-interval or ask your own question.

266
Famous statistical quotations
39
How to test hypothesis of no group differences?
5
Does statistically insignificant difference of means imply equality of means?
5
Statistical Significance or Unambiguous Direction of Influence?