It is not the case.

More generally, taking logs "pulls in" more extreme values on the right (high values) relative to the median, while values at the far left (low values) tend to get stretched back. So if it's symmetric before taking logs, it will be relatively left skew after. This is a simple consequence of the shape of the function $\log(x)$: 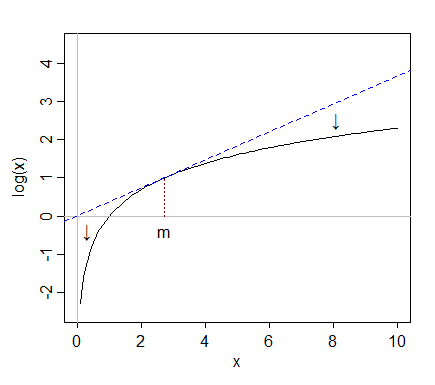 (the line is tangent to the curve. In general it doesn't necessarily go close to the origin, that's just an artifact of the particular value of $m$ in this case)

Now let's talk not about normality, but approximate normality. (For simplicity let's assume that the distribution is such that the values are going to be essentially always positive - i.e. if the original values were normal, the chance of a negative value is extremely low.)

That's when the standard deviation is very small compared to the mean (low coefficient of variation).

If you look at the above diagram, consider values on the x-axis in a very narrow band around $m$. The pulling-in/stretching-out effect is minimal (the black curve doesn't have room to move far away from the blue tangent line), and so the shape still looks normal.

Here's an example: the top plot is a set of approximately normal data (the Q-Q plot shows a fairly straight line), and its log is also approximately normal (the Q-Q plot still shows a fairly straight line). That's because the coefficient of variation in the original values was pretty small (somewhere around 0.2 I think) - the nonlinear transformation was still nearly linear in the narrow range of values around the middle. 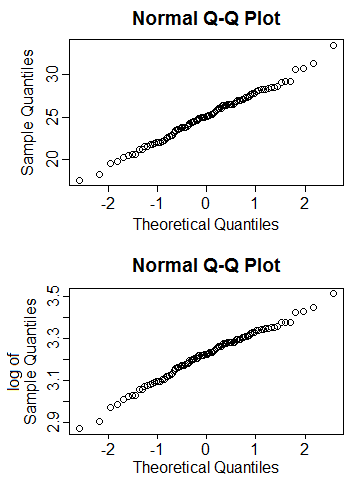 In this situation, the delta method does indeed tend to be useful at giving approximate values for the mean and variance of the log-values, though it would not actually be the distribution of the log of an exactly normal random variate.

No. $X$ may be negative. Therefore, $\log(X)$ will not return a real number with positive probabiity. The normal distribution is only defined on the real line. QED.

However, in practice, one might deal with a distribution that is only approximately normal distributed, and which has a domain $X>0$. For such a distribution it might be still interesting to imagine what will happen when we take the transform $\log(X)$.

The delta method approximates the transformation $\log(X)$ by linearization. This approximation will work well when the difference around the mean (the point where you linearize) is not too large.

The image below illustrates the transform for different coefficient of variation of $X$ (See for similar images here).

The values of $\mu$ and $\sigma$ in the last/right image show that the Delta method works for that case:

More precise than the Delta method

The Delta method will be less accurate when the $\sigma/\mu$ is larger because the approximation with linearization is less accurate. 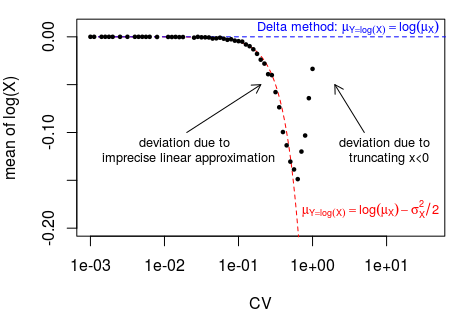 The red broken curve illustrates that the mean of $Y = \log(X)$ can be reasonably approximated by inverting the formula for the mean of a log-normal distributed variable.

So we end up with

this is the red curve in the above plot and it seems to correspond well with the data.

one deals with a logarithm of $X$ where it is the percent of monthly return of an investment. The mean is 1.01 and the sd = 0.04 such that the coefficient of variation is very small.

In that question, the delta method works, but the more precise method even better.

Note: "Can" is different than "must".