Estimating the distribution of a variable

I am trying to estimate (fit) the distribution of a variable. The first step in doing so is to draw a normal probability plot. This is what I have obtained (using R): 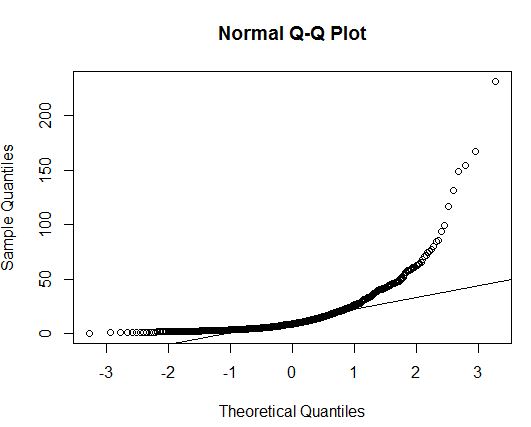 This is the histogram of the data: 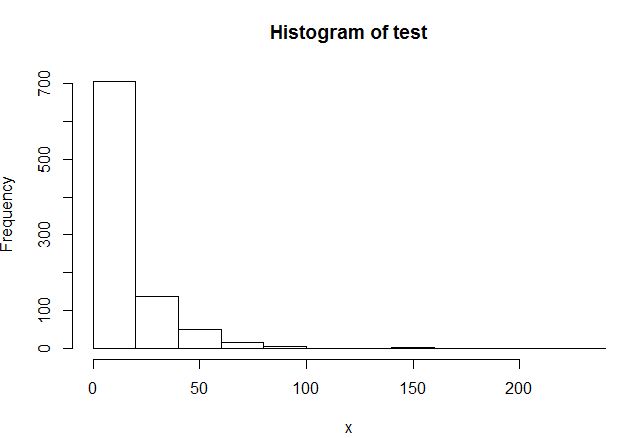 As you can see, there is a quadratic pattern in the normal probability plot, but most point fall ABOVE the reference line. The end purpose for this analysis is to detect outliers. Estimating the distribution of this variable would allow me to determine the threshold to set to determine outliers.

What can we deduce from both the normality plot and the histogram, in terms of the distribution of x, and the outliers?

I would plot kernel density distribution, that would give an idea of the shape of the PDF. Then you can think which distribution to try. In Matlab you can use ksdensity function, it will plot empirical probability distribution.

Better yet to think of the phenomenon you're studying and that may give an idea of what distribution is suitable.

The data are clearly not normally distributed.

I really don't think there's any point in looking for points that would be outlying if it were normal. None of the points look to be outliers to me.

It might be interesting to consider looking at similar displays for the logs of the data.

A hint: when doing histograms, use relatively more bars (I'd suggests leaning toward roughly doubling the default); the R defaults are too low.

If you know your values are close to chi-square, and you're looking at a sum of such, then the combined variable should presumably also be close to chi-square. As such a Q-Q plot against the corresponding chi-square quantiles (with the relevant degrees of freedom) would be the obvious thing to use to identify points that don't fit with that model.

If you don't know the d.f. for these variables, the cube root should be approximately normal (the Wilson-Hilferty transformation), so a QQ plot of the cube roots against normal quantiles could be effective at identifying unusual points in that case.

In addition to the options listed there, you may try lognormal. To test for it, simply log all your data, and make a qqnorm of the result. Logging might also help with outliers. If the result looks roughly normal, then you can use a traditional procedure for outliers (such as making a boxplot in R and asking it to flag the outliers).

I'm not aware of nice equivalents to normal q-q plot in R. However, Minitab (of which you might get a trial copy) has an easy-to-use battery of q-q plots oriented towards fitting a distribution: Gamma, Weibull etc etc

Not the answer you're looking for? Browse other questions tagged r distributions normal-distribution qq-plot or ask your own question.

25
What is the use of the line produced by qqline() in R?
2
The sample size applied to a non-normal distribution
6
Meaning of Qqnorm plot in R
8
Formal definition of the qqline used in a Q-Q plot
0
Are my stock returns non-normally distributed?
0
An explanation of the choice of QQ-line in a normal QQ-plot
0
At chi squared qq plot, shouldn't normal samples be placed diagonally with chi-square?