Help me calculate how many people will come to my wedding! Can I attribute a percentage to each person and add them?

I am planning my wedding. I wish to estimate how many people will come to my wedding. I have created a list of people and the chance that they will attend in percentage. For example

UPDATE: 140 people came to my wedding :). Using the techniques described below I predicted about 150. Not too shabby!

Assuming that the decisions of invited persons to come to the wedding are independent, the number of guests that will come to the wedding can be modeled as the sum of Bernoulli random variables that have not necessarily identical probabilities of success. This corresponds to the Poisson binomial distribution.

Let $X$ be a random variable corresponding to the total number of persons that will come to your wedding out of $N$ invited persons. The expected number of participants is indeed the sum of individual ''show-up'' probabilities $p_i$, that is $$ E(X) = \sum_{i = 1}^N p_i . $$ The derivation of confidence intervals isn't straightforward given the form of the probability mass function. However, they are easy to approximate with Monte Carlo simulations.

The following figure shows an example of the distribution of the number of participants to the wedding based on 10000 simulated scenarios (right) using some fake show-up probabilities for the 230 invited persons (left). The R code used to run this simulation is shown below; it provides approximations of confidence intervals. 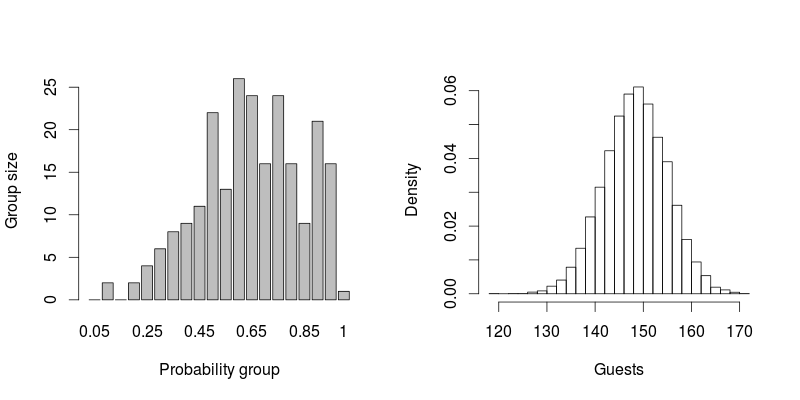 As has been pointed out, the expectations simply add.

However, knowing the expectation isn't much use, you also need some sense of the likely variation around it.

There are three things you need to be concerned about:

The first is amenable to calculation, either by normal approximation or via simulation. The second might be simulated under various assumptions, either specific to the people, or by considering some distribution of dependencies. (The third item is more difficult.)

If I understand your phrasing correctly, for the family of 4, you have a 50% chance each of either 4 people or none coming. That's an expected number of 2, certainly, but you'd want to have some idea of the variability around the expectation as well, in which case you probably want to keep the actual situation of 50% of 0/50% of 4.

If you can partition everyone into independent groups, a good first approximation (with lots of such groups) would be then to add the means and variances across independent groups and then treat the sum as normal (perhaps with continuity correction). More accurate approach would be to simulate the process or to compute the distribution exactly via numerical convolution; while both approaches are straightforward, this is an unnecessary level of precision for this particular application, since there's so many layers of approximation already - it's like being told the dimensions of a room to the nearest foot and then calculating how much paint you'll need to the nearest milliliter - the additional precision is pointless.

So imagine (for simplicity) we had four groups:

Then we get the following means and variances:

So a normal approximation will be pretty rough in this case, but would suggest that more than 7 people would be pretty unlikely (on the order of 5%), and 6 or less would occur roughly 75-80% of the time.

[A more accurate approach would be to simulate the process, but on the full problem rather than the cut down example this is probably unnecessary since there's so many layers of approximation already.]

Once you have your combined distribution that incorporates such group-dependencies, you might then wish to apply any sources of overall joint dependency (such as severe weather) -- or you may wish to simply insure against or even ignore such eventualities, depending on circumstances.

(Ignore my earlier comment on this - I just realised I was confusing the expectation with something else.) Given that you're essentially trying to find the expectation of the number of people showing up, you can theoretically add the probability of each person showing up to do so.

This is because we can consider someone showing up as taking either the value $0$ or $1$, and because the expectation is a linear operator.

However, this only gives you the expected value - without further assumptions it would seem difficult to estimate things like variance of people showing up, particularly since it's pretty fair to assume that person A showing up is not necessarily independent of person B showing up.

That aside, here's a vaguely relevant BBC article.

For large numbers, 80% is what you'd expect. This may be a situation where a detailed analysis as you propose only adds errors to the calculations.
For example, is Marc's potential attendance really 1/3 of Joseph's? And is Joseph's really 30%, or might it be 25%? Things happen when you reach large numbers that simply make 80% more valid than all this analysis. I just came back from a wedding. 550 invited. 452 attended. For purposes of planning the hall and starting to talk to the caterer, the initial estimate of 440 was fine.

As a statistician who just got married, I'll tell you that JoeTaxpayer has the right answer. The 80% figure strikes me as a little high, though could be accurate if most of the people are local (ours was a destination wedding and we landed closer to 65%).

But nonetheless, you're assuming a lot of variability in the prior probabilities that people attend, I think more than really exists. Assuming you don't invite people who actively dislike you, you should assume that just about everybody will come for whom it is within their means and they don't have a conflict (in a broad sense), but at least 10-20% WILL have something that keeps them from attending. For those who have to travel, that increases the time and money required so figure 30-35% of travelers won't attend (depending on distance). Otherwise, keep the probabilities constant (even if your parents say "oh so-and-so won't fly all the way to Austin, we just want to invite them..."). If you're having a fun reception, especially with an open bar, people generally won't skip that unless they have to.

Anyway, congratulations on getting married. Now as to the probability that you stay married, this is always a good read: http://users.nber.org/~bstevens/papers/Marital_Stability.pdf

Add up all probabilities, that's your expected number of people to come.

You have i=1..N events, each has probability $P_i$. The expected number of people to come is $\sum_i1_iP_i$, where $1_i$ - indicator variable equal to one if a person shows up, and zero otherwise.

Of course, we're assuming that whether someone comes or not does not depend on other people's attendance. This assumption is simply wrong. Consider couples, they're highly correlated.

Since you do not have data on correlations, the best you can do is to handle couples as a unit, i.e. $2\times1_iP_i$, where $P_i$ is the probability the couple will show up.

For my wedding, I made two lists -- likely to attend (80%) and unlikely to attend (20%). Regardless of any more refined assessment for any reason, I assigned everyone invited to one of the two groups. I was off by 2 people. N = 1. Purely heuristic.

I notice that no one has pointed out that you do not need to divide by 100. Your percentages can be viewed as expected portions of a person to show up, with the understanding that, like Schrödinger's cat, you will not get parts of a person in attendance or not in attendance, but the attendance state of each person will be entirely resolved at the moment of the event.

The prominent equation in QuantIbex's superb answer shows that summing the percentages results in the expected number of people at the event, no division involved.