How does the interpretation of main effects in a Two-Way ANOVA change depending on whether the interaction effect is significant?

Textbooks often caution against interpreting main effects in Two-Way ANOVA when the interaction effect is significant. Here's a (mild) example of this, from pp562-563 of Hatcher's "Step-by-step Basic Statistics Using SAS: Student Guide":

If the interaction is sufficiently non-significant for your purposes, and you want to test and interpret the main effects, the simplest thing to do would be to drop the interaction and re-fit / re-test the model. Note that this procedure, if not a-priori, comes with all the usual caveats about fishing and threats to the validity of the hypothesis tests.

This is an interesting question. Since I don't like gross generalization, I am going to disagree with the suggestion that you should "never" interpret the main effects at all if an interaction is present. Never is just to strong (even if some might argue that there are clear situations where the interaction tells you what you need to know. To do this, I will provide a counter example and a link to a paper in the Journal of Consumer Psychology where this precise question was asked & then answered by the editor.

In the paper, the following question is asked: Can I make conclusions based on an interaction being significant without testing the simple or main effects?

Here is the hypothetical situation that is given:

"A researcher predicts a crossover interaction between two variables (one continuous, the other dichotomous) that is tested via a linear contrast regression model containing the appropriate main effect and interaction terms. The interaction term receives a significant coefficient. The researcher then concludes that the data support the predicted interaction. Is this an appropriate conclusion? More specifically, given that a significant interaction could occur for data patterns that differ from the one predicted (e.g., a non crossover pattern, a crossover pattern in the opposite direction), is it not necessary to undertake the appropriate simple main effects tests to establish whether the data actually support the differences predicted by the crossover interaction?"

The argument / response that is provided by the editor in favor of always reporting that main effect even when the interaction is present (demonstrating a counter example):

"Yes, it is imperative to defend a statement purported to describe data with a statistic. The scenario you have described for regression would be like obtaining a significant F test for the A×B interaction in ANOVA and then doing no further investigations — that is, both the plot of the cell means and the tests of simple effects to substantiate claims about precisely which means are significantly different from each other. You are absolutely right that a mere significant regression coefficient associated with an interaction term yields no detailed information about the nature of that interaction. If you see someone trying to do this—make a claim about their data without a statistic to support that claim (regardless of whether in regression or ANOVA or anything else for that matter), nail them."

While others may not, I agree with the argument proposed by the author and find the counter-example compelling enough to reject the hardline claim you described that one should not interpret the main effects if the interaction effects are significant.

When you have an interaction, the real issue is whether the main effects (significant or not) are “descriptive” or “misleading”.

Here is an example of data with a significant interaction and “descriptive” main effect for Task Presentation (Computer does better than Paper overall, and for Easy Tasks and for Hard tasks) 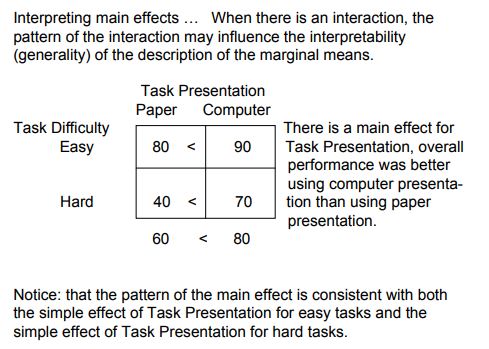 Here are two examples of data with a significant interaction and “misleading” main effect for Task Presentation (computer does better than paper overall, but not for both Easy and Hard tasks) 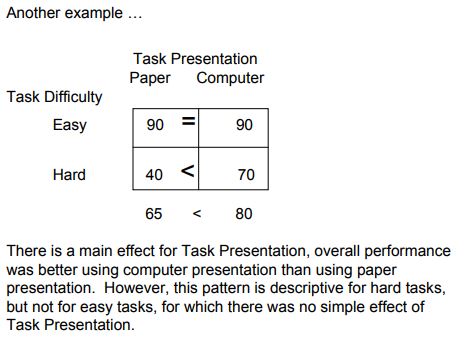 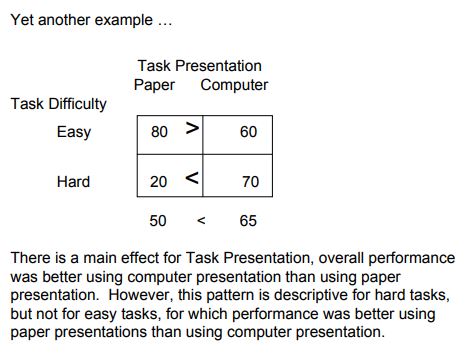 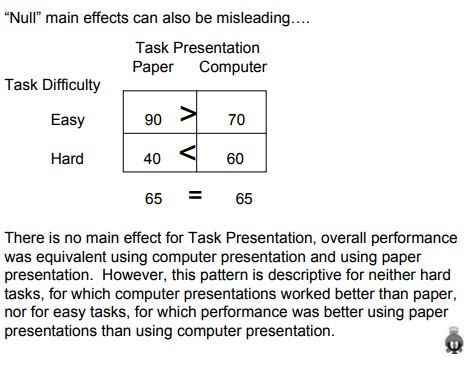 Kind of a long answer, but it is an important issue.

Here is the PowerPoint file that contains these examples, and the course.

Not the answer you're looking for? Browse other questions tagged anova interaction interpretation or ask your own question.