Our problem is to determine if there is a relationship between the return on equity of firms (ROE) and the presence (number of indicators used) (Y) of a specific type of indicator showing up in the annual report. Initially we had 118 observations and after some adjustments we had 104 firms. In order to verify if there is a linear relationship between Y (Poisson distributed) and the predictor ROE we built 8 clusters based on ROE’s distribution and we computed for each class the mean of ROE (ROEm), the mean of the number of indicators used (ym) and, finally, the total amount of indicators used by each class. Then we plotted in a graph the log_ym and ROEm, their relationship was not linear but quadratic. 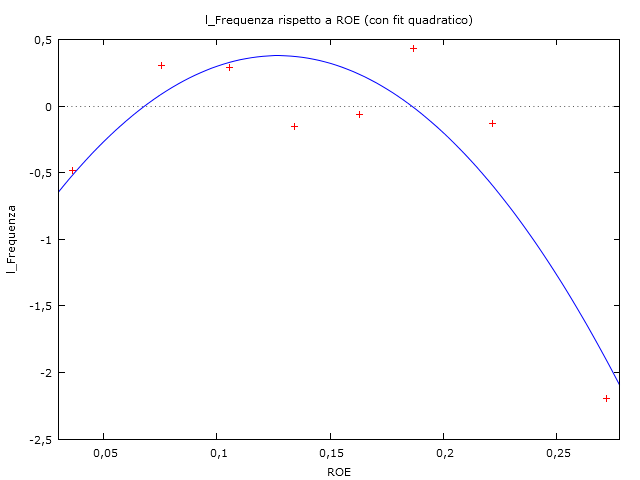 Thus we decided to apply a Poisson regression using as the dependent variable Y and as predictor ROE and ROE^2. This model was not so good: pseudo R^2 was very small (about 0,02) and the hypothesis of over-dispersion was accepted. 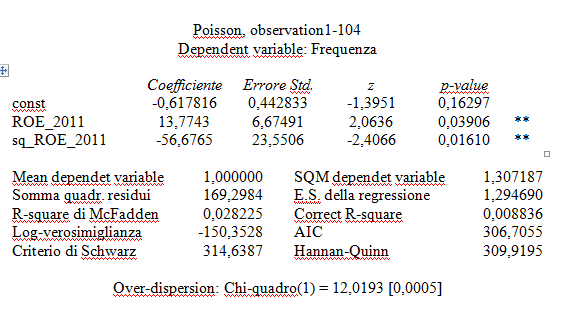 As we read in some papers, we concluded that there is a tendency for observations to cluster. At this point we decided to apply the Poisson regression on clusterized data using as dependent variable the total amount of indicators used by each class (ym is not discrete) and as predictor ROEm and ROEm^2. As the offset variable we used the number of cases per each cluster. The output of the model is summarized below: 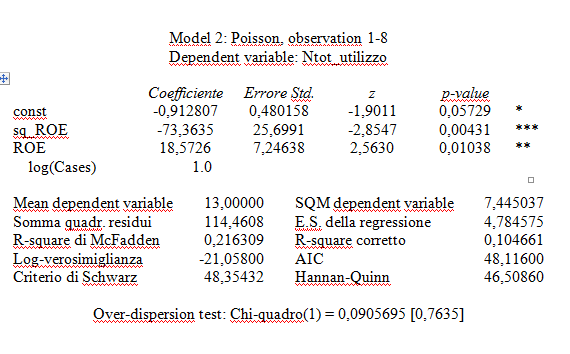 Your impression that it's quadratic is driven almost entirely by a single point (cover that point, the relationship looks linear). You're very reliant on that one point being representative of firms with high ROE (what if there's something that makes it atypical?). Check its influence (e.g. see how responsive the fit at its ROE is to a small change in its value). – Glen_b

Not the answer you're looking for? Browse other questions tagged poisson-distribution poisson-regression discrete-data offset or ask your own question.

5
Quasi-poisson or negative binomial regression with continuous dependent variable?
3
Offset for Negative Binomial Regression
0
Correcting data using poisson-regression
3
Hypothesis test for Poisson process failure rates stays just as powerful for Compound Poisson
3
Does the inclusion of a model offset convert predictor variables from counts to rates?
2
Why use an offset variable as a predictor instead of just converting outcome to a rate?
9
Poisson regression appropriate?
0
Why do results differ with and without offset in Poisson regression?