What's the rationale behind the degrees of freedom in Levene's test?

I've been reading the Wikipedia page for Levene's test, and it cites the degrees of freedom as (k - 1, N - k), where k is the number of different groups to which the sampled cases belong, and N is the total number of cases in all groups. However, it does not explain why this is so. There is a very thorough answer here which would suffice to answer this question in relation to the chi square goodness of fit. However, I have not been able to find a satisfactory answer to the question in relation to Levene's test.

Levene's test is one of several tests that is essentially an ANOVA but using a response that converts the spread of the values into locations. In the case of Levene, the observations put into the ANOVA are: 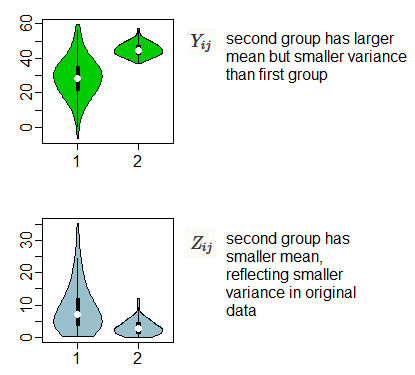 Levene's test simply uses the df of the ANOVA it applies to the $Z$ values.

Not the answer you're looking for? Browse other questions tagged degrees-of-freedom levenes-test or ask your own question.

276
How to understand degrees of freedom?