Can someone please give me some intuition as to when to choose either SVM or LR? I want to understand the intuition behind what is the difference between the optimization criteria of learning the hyperplane of the two, where the respective aims are as follows:

Let's consider the linear feature space for both SVM and LR.

Some differences I know of already:

Ok, let's talk about where the objective functions come from.

The Support Vector Machines algorithm is much more geometrically motivated. Instead of assuming a probabilistic model, we're trying to find a particular optimal separating hyperplane, where we define "optimality" in the context of the support vectors. We don't have anything resembling the statistical model we use in logistic regression here, even though the linear case will give us similar results: really this just means that logistic regression does a pretty good job of producing "wide margin" classifiers, since that's all SVM is trying to do (specifically, SVM is trying to "maximize" the margin between the classes).

I'll try to come back to this later and get a bit deeper into the weeds, I'm just sort of in the middle of something :p 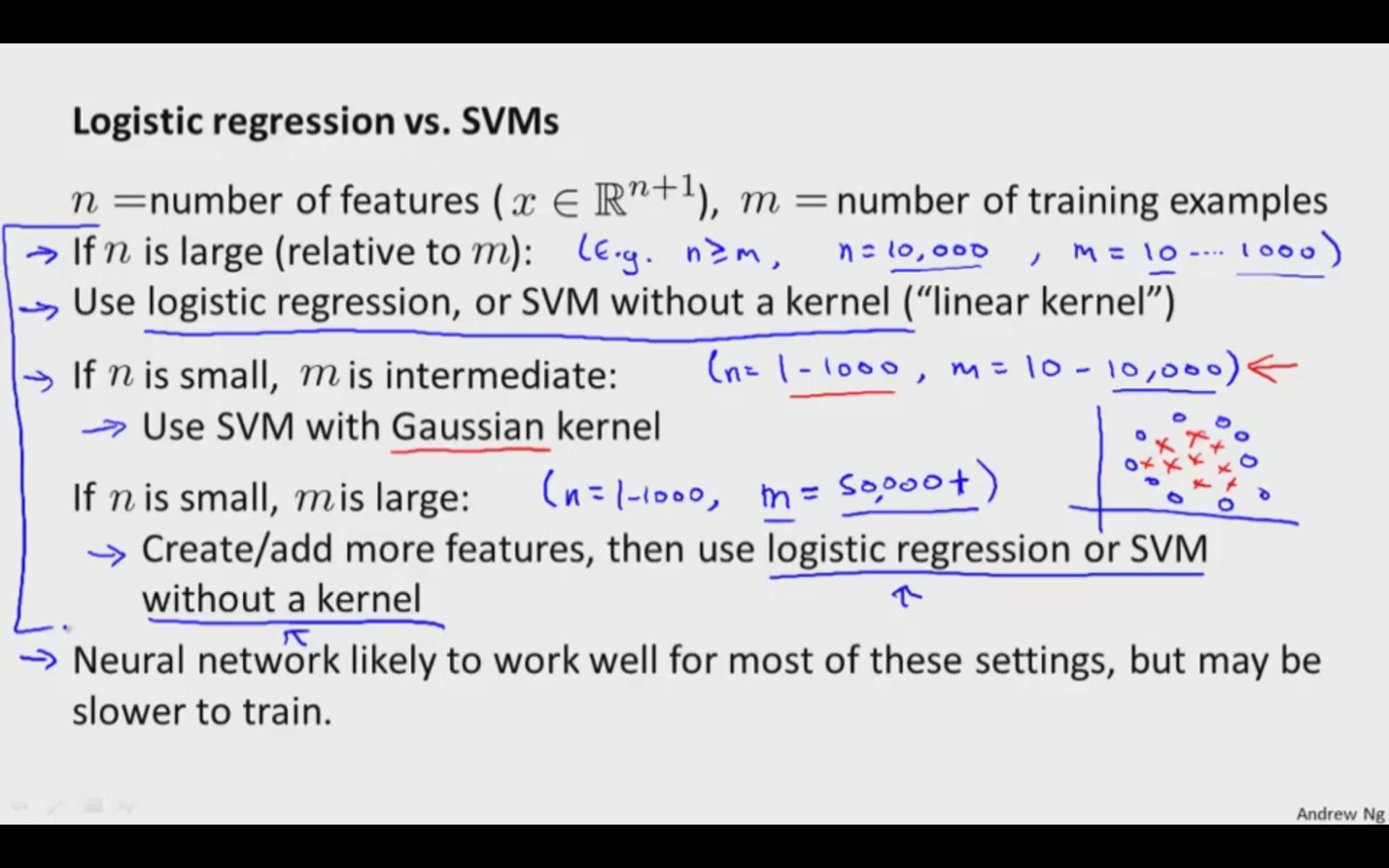 this picture comes from the coursera course : "machine learning" by Andrew NG. It can be found in week 7 at the end of: "Support vector machines - using an SVM"

I think another advantage of LR is that it's actually optimising the weights of an interpretable function (e.g. Y = B0 + B1X1 +B2X2, where X1 and X2 are your predictor variables/features). This means that you could use the model with pen, paper and a basic scientific calculator and get a probability output if you wanted to.

All you have to do is calculate Y with the above optimised function, and plug Y into the sigmoid function to get a class probability between 0 and 1.

This might be useful in some fields/applications, although less and less as we move forward and can just plug numbers into an app and get a result from the model.

Not the answer you're looking for? Browse other questions tagged regression logistic svm optimization or ask your own question.

9
Non-linear SVM classification with RBF kernel
35
Kernel logistic regression vs SVM
38
Difference between a SVM and a perceptron
0
Support Vectors Not Falling on Margin Lines for e1071 and kernlab packages in R?
42
How can SVM 'find' an infinite feature space where linear separation is always possible?
6
SVM basic theory?
0
maximising margin in svm
3
Why One class SVM seperate from the origin
4
Intuition of regular SVM vs kernel SVM
8
How support vectors is calculated on SVM example?